Local governments everywhere are doubling traffic fines and other junk fees to raise revenue, under the guise of "improving public safety." Ahem, your rapacious greed is showing....

That correspondent Andrew T. titled his report stripmining/theft by other means exemplified told me he'd read Survival+, which examines how the State (government at all levels) offers sham facades of "reform" and public safety" behind which they stripmine the remaining productive citizenry with junk fees and other "theft by other means." Here's his report from Ontario, Canada:

As a daily reader I am familiar with the concept of junk fees, levies, taxes and out-right extortion by the government that you and some other contributors have discussed. Naturally I immediately thought of this when it was announced on CBC radio that traffic fines here in Ontario were being raised. I examined the new fines and lo and behold, most of them have doubled!

As there was no explanation offered by the media reports or the government website, I wrote to the Attorney General of the Province to see if they could provide a rationale for the doubling of fines. They informed me that, despite the fact that they would issue the fines (through the police) that the Highway Traffic Act was administered by the Ministry of Transportation and I would need to direct my inquiry to them. The answer they provided was the obvious one, "public safety" was cited as the rationale for the increase. I don't buy it for a second.

Well said, Andrew, thank you. I came across a helpful diagram issued by the local government Ministry of Propaganda which depicts how public safety improves as traffic fines are dramatically increased: 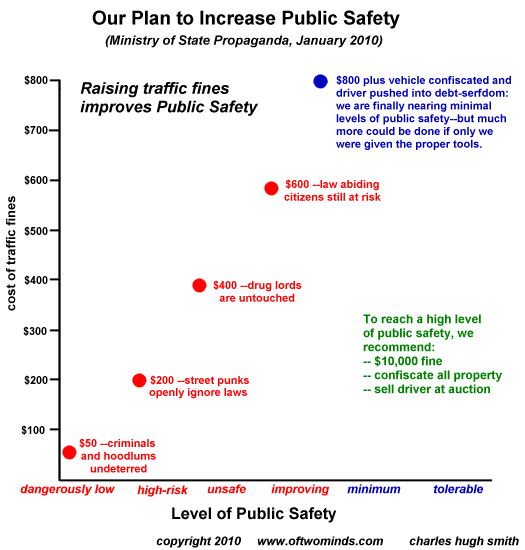 I think we can all see how effective this program will be--not at increasing public safety but increasing the state/provincial government's revenues to maintain their salaries, benefits, perquisites and pensions.

The key driver here (as per the Survival+ analysis) is over-reach. Local government and its employees have over-reached; their salaries, benefits and pensions are now roughly triple what the private sector pays. Now as the economy crumbles, the protected fiefdoms of public unions and other dependents on tax revenue swag are fighting any cuts beyond the purely symbolic.

One of their primary strategies is to raise revenue without actually "raising taxes," something which might actually cause the citizenry to arise from their somnambulent absorption with cellphone apps, iPods, TV and other "entertainments."

So instead we get junk fees: surcharges, penalties, doubled or tripled traffic and parking fines, and so on.

This sounds good in theory to cash-starved bureaucracies desperate for swag (recall that 80% of local government budgets go to personnel costs: salaries, bennies and pensions), but the reality is that these stripmining measures all backfire. Not only do they not raise more money, they are fueling a deep and abiding anger in the public.

The concept of stripmining illuminates the destructive consequences of local government's rapacious greed. Once you tack on excessive penalties to simple traffic fines and enable the local authorities to impound a citizen's vehicle, he/she can no longer get to work. The local government has now pushed them into penury; they are now debt-serfs. Their means of earning money have been destroyed; now there is no income stream for the local government to tap.

In stripmining the citizenry, local government is leaving nothing behind but barren fields. Once you raise the cost of doing business via junk fees and other "theft by other means," then small businesses just fold up. You can't lose money every month for long. Once government stripmines the remaining productive citizenry, there will be no source of revenues left.

Once the over-reach extends past a certain point, the system implodes. The beams are already snapping, but local government isn't listening; it's only concern is raising more swag by whatever means are at hand.