The Wal-Mart Model of Self-Destruction is simple: low prices are all that matters.

The devolution of the American citizen into a self-destructing consumer starts with the devolution of a value system into an monomaniacal obsession: "the only thing that matters is the lowest price," regardless of the true costs or consequences.

The propaganda of marketing has so hollowed out American culture that most citizens cannot recall a time that "Consumerism" wasn't the unofficial religion of American society. And what is the First Commandment of "consumerist religion"? The lowest price is all that matters.

Quality doesn't matter; we're going to move/throw it away anyway.

Who made it doesn't matter. The idea that you might pay more to keep your neighbor employed is akin to worshipping the Devil: all that matters is the lowest price.

The consequence of this mono-mania is that all other costs and consequences are ignored/not priced in unless government shoves it down the retailer/manufacturers/consumers' throats.

I recently helped a friend research buying a small portable washing machine--the kind for small apartments which can be rolled to the kitchen sink and connected to the kitchen faucet, then returned to storage elsewhere.

There are few manufacturers due to the small market: Haier, the Chinese manufacturer, sells a model for under $300. Bosch (German) sells one for around $1,200, and Kenmore (Sears) sells a Whirlpool-made model for about $700.

My friend wanted to buy an appliance that would last, and one made in the U.S., and I recommended the Kenmore based on my own experience with our 5-year old (U.S. made) front-loading Kenmore washer. So we go to the Sears outlet to look at the portable washers and discover they're made in Brazil. In other words, there are no household appliances of this type made in the U.S. or even in North America. China and Germany make portable household washers but the U.S. does not.

The sales clerk, who told us she'd worked there for over 12 years, then informed us that customers had been complaining about Whirlpool's switch from an old-style dial for turning the washer on and off to a digital display which had the nasty habit of failing after a year or two.

In other words, quality doesn't matter. The digital display probably contains a few dollars or less of actual electronics; yet when it fails, it costs more than the Chinese-made washer to have it repaired.

As a result of this sharp decline in quality and high probability of costly repairs, the sales clerk recommended my friend buy the $129 extended warranty.

So the U.S. brand (made in Brazil), with the apparently necessary extended warranty and California state excise tax (almost 9%) is roughly triple the cost of the Chinese appliance, which cannot be serviced should it break down because Haier has no local service center.

Note to Whirlpool/Sears: do you actually read your customer feedback? If you did, perhaps you'd offer two models: a U.S.-made one with a mechanical dial which costs X dollars and carries a 10-year warranty because you manufacture it to standards you had 20 years ago, or perhaps as recently as 5 years ago, and a second low-quality one with a guaranteed-to-fail digital control board made overseas and shipped to the U.S. for X dollars (presumably lower than the quality appliance but still twice the cost of the Haier.)

Now enable consumer feedback on your two models and see which one achieves a profitable reputation and sales history.

If no one buys the higher-priced, high quality appliance which actually costs much less over its lifetime than cheap throwaways, then the American "consumer" deserves what he/she gets: low quality and high lifetime costs (i.e. everything must be repaired or replaced constantly).

If you can no longer manufacture an appliance that lasts for 20 years (and hence it is safe to warranty it for 10 years), then you deserve to go out of business. 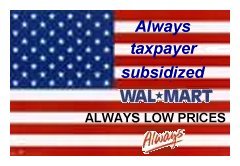 An obsession with "the lowest price" without regard for any other issues, consequences or hidden costs is an act of self-destruction. We as a nation have absorbed the Wal-Mart model of self-destruction, and so we blindly seek the lowest price even as it guts the environment, guts local industry, guts civic centers and ends up costing us more once the total lifetime costs are tallied (all those taxpayer subsidies for "cheap" goods and retailers and high life-cycle costs for crappy goods which don't last.)

Everything we buy or don't buy is a "vote" for or against quality and low lifetime costs.

Is "convenience" and "low prices" really all that's important? Isn't it odd that we spend considerably less on food as a percentage of income than we did 30 years ago but our health has deteriorated and people are complaining about the "high cost of food" even as they rarely eat at home any more? Are "low prices" really that wonderful for the nation? Or did we "get what we paid for," i.e. low quality for low prices, with extremely high-cost consequences of that monomanical obsession with the lowest upfront price?

Maybe we should require that all the costs associated with the item be included in the retail price. Maybe we'd realize the "lowest price" is actually the costliest option we could possibly have taken.

I have addressed these issues many times before:

This Nation's Devolution from Quality to Convenience (January 4, 2010)