Is this the top of the global equity rally which has run up for 10 months? A case can be made for "yes."

Is the top in on global stock markets? The case can certainly be made on a technical basis. In one of our private email exchanges, correspondent B.C. mentioned a possible turning point in the stock market around the third or fourth week of January. Curious about the timing, I asked if he could provide some context for that possibility. Here are his comments:

As for the "potential" cycle turn date, it is based on the Elliott Wave (EW)/Fibonacci 61.8% scaling of the decline from Oct. '07. But, as you well know, EW works "when it works" (selection bias or effect and post facto rationalizations); and, if it does operate at some deep structural level, there is the ongoing challenge to discern in real time the relevant scale within which a phenomenon is (or is not) occurring.

The Jan. timing also fits within the time-price self-similarity of the Nikkei in late '99 to early '00 and the SPX in 1939, which could extend with an ongoing topping pattern to the SPX 1220s-40s into Feb.-Mar. in terms of an idealized time-price symmetry; and (2) the tendency for stock prices to peak early in the second year of a presidential term during secular bear markets and decline for the year on average.

Were the pattern to fit generally with the EW scaling, we are completing a "b of C" within a larger secular descending triangle pattern, and we will see a C-wave decline of 3 waves into '13-'14.

The bullish sentiment is rather consistent with a B or 2 wave, particularly today in that it is the general consensus of the Wall Street/DC establishment and at least a significant plurality of the "investor class" that the Fed saved the day; "reforms" are being implemented to prevent a repeat of the serial crises; the "worst is over"; and the economy is "recovering" and at no risk of a relapse. I see the structural effects of Peak Oil on the price of oil, debt service, and consumer spending creating a persistent risk of a double dip and a continuing deceleration of trend real GDP growth from '00 to 1% or less over the next 5-10 years.

Moreover, "Decoupling 2.0" will mean China-Asia will "lead" the world out of recession, benefitting US and EU exports, and so on. I contend that "Decoupling 2.0" reflects a gross misunderstanding of the global "trade" regime or is a purposeful fabrication for propaganda purposes, as China as created the largest credit bubble in history, risking a similar scale of collapse.

Let's look at a few basic charts to see if we can discern any useful patterns/trends which might augment/confirm the possibility that the top is in. As always, please read the HUGE GIANT BIG FAT DISCLAIMER below--this is NOT investment advice, it is the freely offered meanderings of an amateur observer. 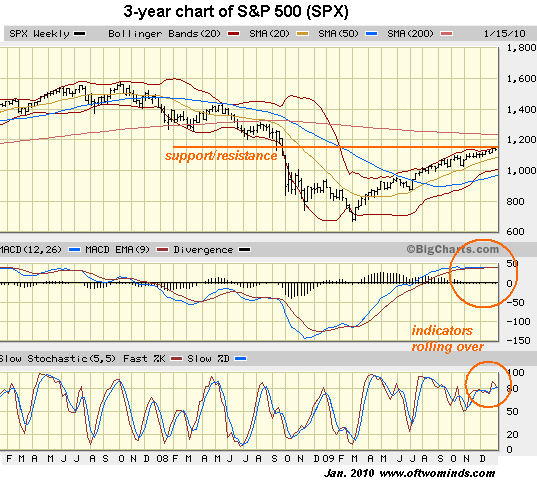 While the price trend slowly ground higher over the past few months, MACD has been absolutely flat for the entire time. Stochastics have rolled over and are dropping below the overbought level.

Could U.S. stocks grind higher? The 200-day moving average (the thin red line) around 1,235 beckons as a magnet, but the SPX has already filled all the gaps in the cascade down in late 2008, and reached a level of support/resistance from that time frame. The flat MACD suggests a market drifting higher on fumes. 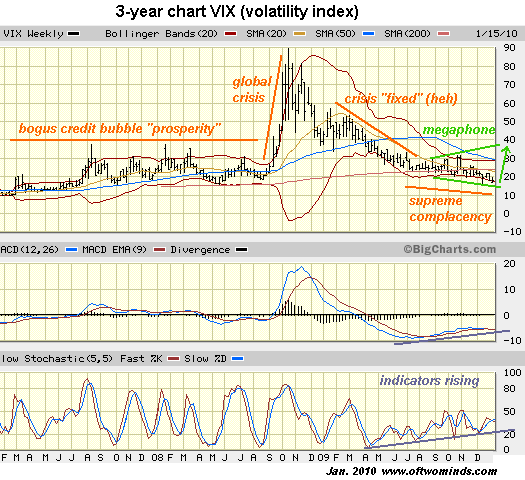 Meanwhile, the VIX has dropped to lows not seen since the era of bogus credit-bubble "prosperity," a sign of supreme complacency and confidence that "everything's been fixed and the new Bull Market is based on growth in GDP and rising profits."

Maybe, but if GDP is growing so robustly, then why are sales and income taxes still plummeting-- 7% in December alone?

If the "Bull Market" is actually based on propaganda and not the real economy--which is after all still shedding jobs--then the VIX could prove the old adage "low volatility begets high volatility." The "megaphone" pattern observed here earlier is still in place, and a sudden rise in the VIX would fit the pattern. 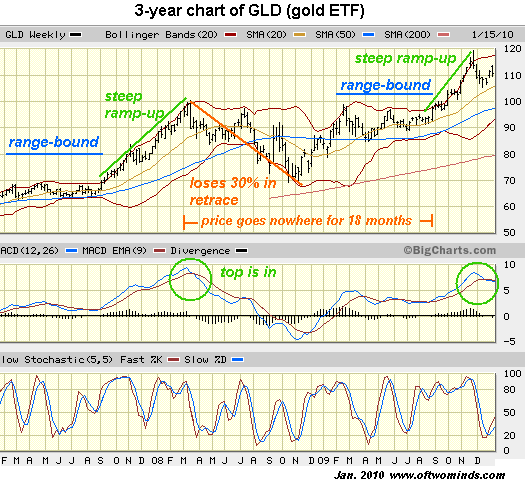 Perhaps, but as someone who values gold as an investment class, I have to point out a troubling large-scale pattern on gold. The price of gold tends to ramp up violently in a few months, attempt a consolidation and then correct as much as 30%. After the steep correction, the price noodles around for 9 to 18 months in a trading range, essentially going nowhere.

Clearly, the time to buy (more) gold is after it's almost finished its noodling around period and before it makes its next moonshot.

Given this pattern, it is well within norms for gold to fall 30% or so, which works out to a fall of $400 from $1,200/oz to $800/oz. I'm not saying this will happen, I am simply pointing out it has happened after previous steep ramp-ups in the price of gold. We should also mention that gold is overloved right now--a precarious place to be. 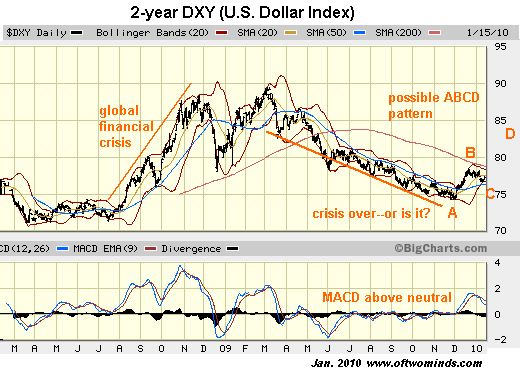 Many noted the inverse correlation between the SPX and the US dollar (DXY): when the dollar tanked in 2009, stocks rose. When global equities crashed in the 2008 meltdown, the dollar rose.

Since December, however, both equities and the dollar rose together. Some are suggesting the correlation has either weakened or reversed, but I suspect the rubber band is simply being stretched. The explanations for the correlation are all rather weak--the carry trade, U.S. corporations' overseas earnings rise as the dollar weakens, etc.

Perhaps the most powerful force is the element of risk. As complacency has returned to global markets, then the "safety" (a relative term, to be sure) of the U.S. dollar has little appeal, while higher returns in riskier investments have gained traction. The appetite for risk has returned with a vengeance over the past 10 months, and perhaps the risk which has supposedly fallen to near zero hasn't vanished--perhaps it's only been hibernating.

Should that situation reverse, and fear/risk aversion return, then the dollar might gain as demand for "safe" assets grows and desire to hold equities collapses.

It is striking that the dollar has reversed despite the supposed confidence reflected by the VIX and the MSM propaganda machine. It seems to be carving out a rising A-B-C-D pattern in which the initial leg up (A to B) is follwed by a correction (B to C), which is in turn followed by a more powerful thrust upward (C to D).

While it is possible that equities and the Dollar may rise together, the charts seem to reflect a bifurcated market in which some punters are extremely confident/complacent (as shown in the VIX and the SPX grinding higher) while others are distributing (selling) their equities (hence the flat MACD for months on end) and buying the "safety" of the dollar--as if they expect the "happy story" of global recovery to fall apart very soon.

As B.C. noted, there are also time cycles to consider. A 10-month long rally accompanied by a VIX dropping to multi-year lows suggests a turning point is increasingly likely, for the simple reason extremes in the VIX tend to foretell a reversal of trend, and no market runs up or down in a straight line for very long. This is simply a matter of probability.

We shall soon have a new forum on which to share thoughts, experiences and insights. Stay tuned!