The response to my weekly email subscription has been really gratifying--thanks to all who are participating. I've received a number of inquiries to give a little more detail about what's in the "exclusive" "Weekly Musings" emails-- a testament to the smartness (and skepticism) of my readers.

I think the the best answer would be to consider it a glimpse into my notebook-- where I jot down things that catch my attention, organize future themes, collect URLs that have intrigued me, and things that generally form the swamp of goo from which many of these blog pages originate. Definitely unfiltered, and possibly in some cases purely raw, but I thought it would be interesting-- and in some cases, very useful and valuable for many of my loyal readers to see the source of the dots which I connect in this blog.

Here is a sample item from last week's "Musings" which is the springboard for this week's theme: stories told by charts:

Graphics are changing the way we view information (via G.F.B.)

This 11-minute video clip exceeds my tolerance level for video (5 minutes) but it offers up some singular insights into the power of visual information in a globalized social media world. Displaying large amounts of data in a visually compelling fashion is one factor in an ongoing an information revolution, but the very attractiveness of these images also greatly increases their power to deceive/misinform.

Since I have long dabbled in charts and graphics on the blog, this clip brought all sorts of possible applications to mind. A visual representation of how much energy we each use annually (on average), for example: how much energy does our Internet usage consume compared to the jet fuel consumed by our air travel?

What's interesting is how charts, both static or video, can tell an information-rich story/sketch a narrative, and do so in a way which requires much less time to absorb than a text-narrative.

As noted above, this power to display an easily-grasped narrative also increases the propaganda leverage of graphics and charts.

One famous example of this was General Douglas MacArthur's careful choice of the photo of himself and Emperor Hirohito which was distributed to the Japanese people after Japan's surrender in 1945, which ended World War II.

The photo is formally arranged: the two are side-by-side, facing the camera directly with sober, mask-like expressions. MacArthur, hatless, his hands informally in his pockets, is wearing his standard Army uniform; he is a head taller than the Emperor, who stands stiffly in a formal Western suit. 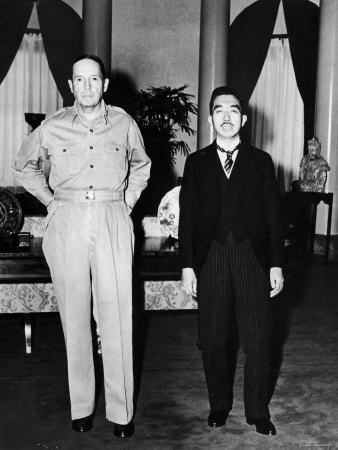 The image tells the entire story symbolically: the U.S. dominates Japan with a military might so powerful that it can do so from a relaxed slouch: Macarthur is in charge, not the Emperor, who has been reduced from god-like status to mere mortality. No aide-de-camps or other figures distract from this central narrative.

Correspondent Doug Walden recently submitted a large chart of the "Freedom-Tyranny Continuum." I post it here not because I agree with every point displayed--I don't--but because it is a fascinating visual depiction of political-economy information. 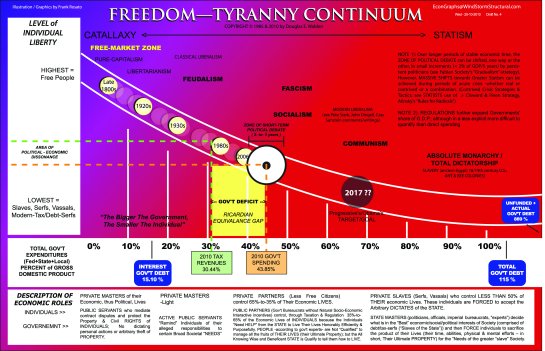 Click on the image above to open a larger version in a new browser window.

I will be posting other "chart stories" this week, though posting may be sporadic due to "system overload" (this is a one-man shop, etc.).