Why Fannie and Freddie Have Doomed Housing Prices, Regardless of Bailouts   (July 14, 2008)


If you got a penny for every word written during the past week about Fannie Mae and Freddie Mac, you'd be a millionaire, if not a billionaire. It is highly likely that no stone has been left unturned in this great torrent of words and analysis, but it seems two points have been generally ignored or under-emphasized:

1. Regardless of whatever bailout is proposed for Freddie and Fannie, interest rates and thus mortgage rates will rise significantly. Even if all the distressed garbage loans are fobbed off onto the taxpayers (as wrong as that would be), that won't put the bloom back on the U.S. housing rose. Is there even one person left on the planet who thinks debt based on the U.S. housing market is basically risk-free?

And what happens when risk is priced into debt? The interest rate must include a hefty, if not outrageously gigantic, risk premium. That's how 6% mortgages quickly become 9% or even 12% mortgages. Or how 30-year mortgages might simply vanish and the longest term you can find will be 15 years--at a stupendous premium.

2. Since Freddie, Fannie and Ginnie end up owning up to 75% of all mortgages originated in the U.S. housing market, their inability to sell new garbage loans to now-wary investors means 3/4 of the mortgage market has been impaired. Mortgage availability will contract most savagely.

Let's take a look at a chart that depicts the see-saw effect: 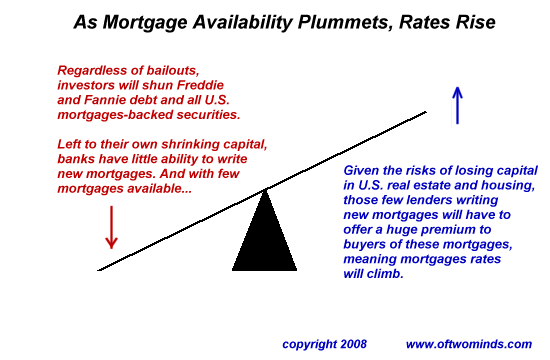 Recall that banks and lenders of all types and sizes are suffering from impairments in their capital. Whatever assets the banks have on the books are depreciating rapidly, essentially gutting their capital base and their ability to originate new loans.

Recall that capital requirements have been as low as 1%, meaning a bank need only retain $1 million in actual cash to write $100 million in loans. If those loans drop in value by 2%, the bank must raise cash or it is essentially insolvent.

As astute correspondent J.F.B. has noted many times before: how can banks make money in an environment of depreciating capital and distressed debt? The short answer is they can't: all the capital they're raising is simply bringing them up to bare solvency (at best; if all the off-balance sheet garbage is forced onto the balance sheets, then the majority would be hopelessly insolvent.)

So what happens to the housing market if rates skyrocket due to risk premium, and mortgage availability dries up? It tanks even further. As noted here many times, housing depends entirely on cheap, readily available mortgages. Once those two conditions go away, housing dies a slow, agonizing death. Prices have to fall--recall that a $600,000 mortgage at 6% is equivalent to a $300,000 mortgage at 12%--and buyers will find they cannot find mortgages without hefty origination points.

And without buyers, then the market freezes up, becomes illiquid. Few sellers will find buyers and prices will decline to the point that cash buyers appear. (Hint: that isn't $500,000, or even $300,000.)

The bond market seems to have been sniffing out this possibility for several years. Knowledgeable reader J.B. was kind enough to provide the following chart; though he notes a strong cyclical pattern which suggests ultimate yield lows in the 2011-2012 time frame, the triple-bottom I have indicated and the yield's obstinant reluctance to dip below the upper channel suggest to me we are close to breaking out of a 24-year downtrend in yields, and entering a 20+ year cycle of rising rates. 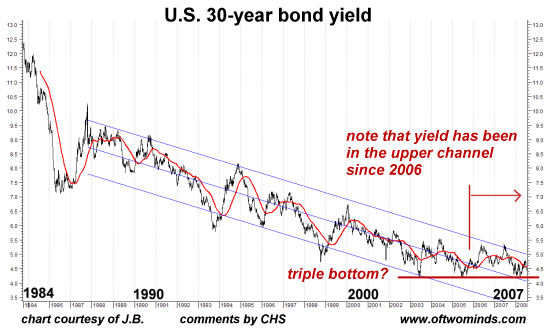 So while much heat and light are being devoted to past debt--who will suck up the enormous losses in Freddie's and Fannie's trillion-dollar portfolios--I am looking at the staggering effects their demise as providers of "low-risk" debt will have on the housing market in the future. If nobody's dumb enough to trust the U.S. housing market or the garbage paper being kited by Freddie and Fannie, then mortgage availability will simply blow away and rates will climb rapidly up to the point that investors are being amply rewarded for taking the grave risks of betting housing won't decline precipitously in the U.S.

Ironically, the "poker hands being called" will trigger the very decline in valuations everyone fears. Think about it. You're responsible for $1 billion of a pension fund's money; are you going to risk your capital on a huge gamble that U.S. housing has bottomed? On what evidence? Hope? Hope is what got us in this mess in the first place.

And recall that despite the implicit government backing of Freddie and Fannie, the market for mortgages is still private: you still have to con a private investor to part with cash to buy the mortgage or mortgage bond. And if nobody's dumb enough to give you cash for depreciating paper, then you still can't sell mortgages, regardless of any guarantee in the world except "You can't lose money because the U.S. taxpayer will buy every single mortgage originated in the U.S." Are we collectively going to approve that $10 trillion bailout?

Craig M. recommended this link to Nouriel Roubini's take on such a bailout, which is the U.S. government losing its AAA rating: Insolvency of the Fannie and Freddie Predicted Here Two Years Ago. What Happens Next? Or How to Avoid the "Mother of All Bailouts".

Is anyone who manages big money really dumb enough to believe housing can't fall another 15-20% or even more? I don't think so. Smart money will be demanding risk premiums large enough to protect against further declines in real estate values: huge down payments, big points (origination fees) up front and high interest rates.

This is slightly dated (2001), but this report from the Federal Reserve Bank of Atlanta shows how incredibly dependent the mortgage business has long been on Freddie, Fannie and Ginnie:

Back in the good old days of, say, a year ago, Freddie and Fannie were actually seen as beneficiaries of the subprime meltdown (heh): Fannie Mae and Freddie Mac enrich shareholders in subprime's shakeout (Bloomberg, June 2007)

Fannie Mae and Freddie Mac, which are U.S. government-chartered companies and the biggest source of money for Americans buying houses, accounted for 46.9 percent of all mortgage bonds sold through April, according to Inside Mortgage Finance, a newsletter.

Fannie Mae and Freddie Mac, which together own or guarantee about $4.5 trillion of residential mortgage assets, are offering the capital after foreclosures increased 62 percent in April from a year earlier, according to a recent report by RealtyTrac, which sells information on defaults.

Fannie Mae and Freddie Mac finance about 40 percent of the $10.9 trillion of U.S. residential mortgages. More than $6 trillion of mortgage bonds are outstanding, making it the largest debt market in the world and about 50 percent more than the amount of U.S. Treasury securities. The prices that investors pay for the bonds help determine the rates lenders charge consumers.

Back in 2006, after billion-dollar questions arose in their accounting, Fannie and Freddie were slapped with modest restrictions which shrank their ability to buy more garbage oops, I mean mortgages and mortgage-backed securities: Fannie, Freddie Retreat as Mortgage Bonds Mutate (9/6/06)

The companies accounted for 38 percent of mortgage-bond sales this year through June, down from a record 70 percent in 2003, according to data service Inside MBS & ABS. The bonds, which help determine rates homeowners pay on loans, have risen 51 percent since 2001 to $6.2 trillion, Bond Market Association data show.

They were losing market share just as a growing economy and low borrowing rates fueled a boom in housing. The amount of residential mortgage debt rose to a record $9.17 trillion last year from $5.57 trillion in 2001, according to the Federal Reserve.

So regardless of what bailout is proposed, we're still sitting on a $10 trillion powderkeg with about an inch of fuse left. I cannot repeat this often enough: with all the risks of further valuation declines now visible, who is going to step up and buy another couple trillion in housing debt? The taxpayers? No way. We're already on the hook for the $1 trillion+ losses in the existing garbage mortgage pool.

Again: who would be dumb enough to be buying mortgages or mortgage-backed securities with the sizzling fuse just an inch away from the powderkeg?

Of course not every mortgage owned by Freddie or Fannie is garbage (yet); but the question remains: how many mortgaged properties in the U.S. are truly immune from future valuation declines? How safe are even conventional 80/20 mortgages? What about all those markets which have declined 25-30% Even a conventional mortgage with 20% down in these markets is completely underwater.

But here's Fannie's own website to reassure you: Discussion of Credit Book of Business (rest assured it's all under control)

Several readers have recommended my esteemed blogger colleague Karl Denninger's clear-sighted analysis of the situation, and as a longtime reader and fan of Mr. Denninger I heartily concur: Fannie, Freddie, Banks and Government Debt.

Thank you, Carlos C. ($100), for your stunningly generous contribution to this site. I am greatly honored by your support and readership.