In yesterday's entry, Harun I. made use of the phrase 'bread and circuses,' which refers to ancient Rome's jaded citizens' hunger for handouts and entertainment at the expense of their political rights and liberties. Here is the Wikipedia entry: Bread and circuses:

In context, the Latin phrase panem et circenses (bread and circuses) is given as the only remaining cares of a Roman populace which has given up its birthright of political freedom:

... Already long ago, from when we sold our vote to no man, the People have abdicated our duties; for the People who once upon a time handed out military command, high civil office, legions - everything, now restrains itself and anxiously hopes for just two things: bread and circuses.

And what is American Idol, NASCAR et al. but modern-day circus, and what is the bailout of defunct mortgages and lenders but "bread" on a vast scale?

My longtime friend G.F.B. recently wondered if the entire presidential election is fundamentally a distraction on the level of entertainment/circus. This is not to say that there is no difference between the candidates; regardless of our biases and views, we can all agree that the U.S. would not be precisely where it is today had Al Gore been elected President in 2000.

But has any presidential candidate, winner or loser, actually spoken to the fiscal and moral consequences of depending on ever-greater borrowing for so-called "growth"? Back in 1992, independent candidate Ross Perot was widely mocked for referring to the U.S. budget deficit as the "crazy aunt in the attic," which ran counter to the Reaganomics fantasy that huge deficits "didn't matter."

Enough people supported Perot's "straight talk" that the Republican candidate, George Bush, lost the election that year. That political pressure for fiscal restraint led to the Clinton administration and the Republican Congress limiting spending via "reinventing government" and "The Contract with America," which coupled with an Internet-fueled growth spurt, actually created the illusion of Federal surpluses. (If the government hadn't spent the Social Security surplus, it would have still reported deficits.)

Since those brief (and spurious) "surpluses", the American electorate and governing class has become remarkably immune to any concern over deficits or borrowing, public or private. $400 billion deficits are now accepted as "normal," and spending nearly $300 billion a year on interest on the national debt--surpassed by only Defense, Social Security and Medicare expenditures--also elicits only yawns.

Th facile reason might well be 9/11--after that shock, the government rushed to "normalize" the economy with cheap, easy to borrow money. But as Harun noted yesterday, the reliance on low interest rates and deficit spending go back much further than 2001-- and even after the economy righted itself in late 2002, rates and liquidity were not tightened, they were eased even further.

The past two days we have examined the folly of attempting to reinflate/bail out the credit/debt bubbles the U.S. government agencies, elected officials and public have enabled. What few seem to realize is that the U.S. simply does not have the savings pool needed to cover trillions in housing/real estate losses, or to fund trillions more in new mortgages.

What we have foolishly taken for granted is the global savings pool which has enabled the U.S. to borrow recklessly, without consequences, until now. The apologists are quick to claim that 401K and IRA pension plans are America's true savings, and the negative savings rate reported in the media is bogus. But not every worker is socking away money in 401Ks, and those are retirement plans, not savings--there is a difference.

As the dollar plummets anew--80 on the DXY was widely viewed as "the line in the sand," and here we are at 71 and declining--everyone holding assets denominated in dollars is seeing their equity literally destroyed. (Chart courtesy of Harun I.) 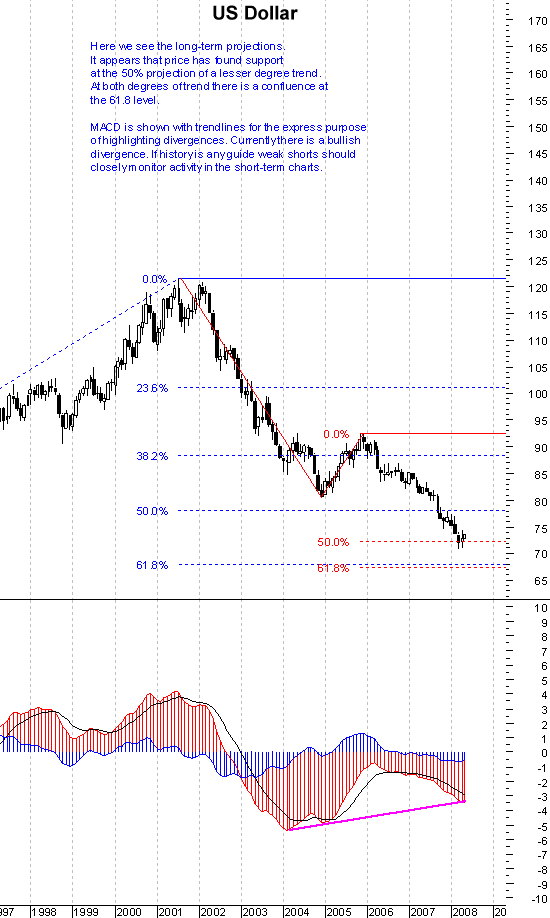 The poster child for a credit/debt bubble which is "fixed" by massive new borrowing for 15+ years is Japan. The problem with borrowing trillions in an attempt to reinflate the credit bubble or recapitalize the economy is that, well, you owe interest and principal--and so will your children and grandchildren.

As we see below, the Japanese central government draws an astounding 41% of its annual expenditures from debt (bonds), and even with interest rates at the absurdly low 1% level, the interest on that ballooning debt accounts for fully 22% of total expenditures and an astonishing 42% of tax revenues.

It seems self-evident that we as a nation have a choice: the Japanese model of two decades of crippling decline, or an immediate reckoning of losses and recapitalization via domestic savings. But even this is a false choice, for we don't have enough domestic savings to enable the sort of stupendous deficits the Japanese have been running for years. We must turn to the world economy to fund our borrowing (as we have for years), just as the global economy is sinking into a credit/profit/asset contraction of gargantuan proportions.

In the vernacular: ain't gonna happen.

So as we watch the two presidential candidates dodge and weave the hard necessity to renounce bad debt and take the losses, whatever and wherever they may fall, and the hard necessity to align government spending with actual revenues, we have a choice: shall we support the one who panders most and panders best, the one who promises us more bread and circuses, or shall we choose the one who most directly faces the reality that trillions have been lost and cannot be recovered, and who most directly states that it is not the taxpayers' job to "save" those who gambled on risky debt/financial instruments and lost.

The candidates want to win, of course, and they are acutely sensitive to the whim and will of the voters; if the voters (us) demand bread and circuses, the candidates will respond with pandering and corporate welfare and rousing cries for more taxpayer-funded giveaways to "victims."

But if we reject pandering, bread and circuses, then they will respond to that, too. The leaders are not actually leaders, they are followers of the public will. If we fail to will anything but farce, distraction, giveways and the entertainment of ersatz "debate," then our "leaders" will give us precisely that--bread and circuses--regardless of who wins the election.

And if pandering and denial are our collective choice, we will enter a decline that will make the Japanese "lost decade" look like fabulous prosperity.

Thank you, John H. ($20), for your generous contribution via mail to this site. I am greatly honored by your support and readership.