Knowledgeable reader Rainer H. recently provided two powerful arguments in support of the idea that oil has topped out and is set to decline. Rainer responded to my "head-fake" oil chart in which I predicted oil dropping in a global recession and then heading for the figurative moon ($1,000/barrel) once Peak Oil drove supply far below recession-reduced demand.

His counter-arguments are well-grounded in history and may well prove to be more accurate than my doom-and-gloom prediction. Here are his comments and a chart he submitted in support of the oil-will-decline thesis.

First, with all due respect I disagree with this whole Peak Oil thing! If it came to picking Elliott Wave Theory over Peak Oil Theory I will pick EWT anytime of the day. My bet is that Crude Oil will hit between $75-$50 USD before it ever hits anything close to $1000. On top of that Peak Oil has been beat to death by the public already.

All those smart crude oil speculators have stop loss positions built in and a Bullish Oil trader bragging about being bullish instantly turns into a seller when his stops get hit. Just like snakes and ladders the stops get taken out and a new trend is born. You can see the stop sweepers at work on any Intraday chart or higher by looking for the spikes.

When someone comes up with a hypothetical oil price number then all I have to do is plug in the Gold/Oil ratio presently at about 7-8 to one and you will come up with what the gold price will be at $1000/ brl oil price. I make this about $7000-$8000 Gold price. 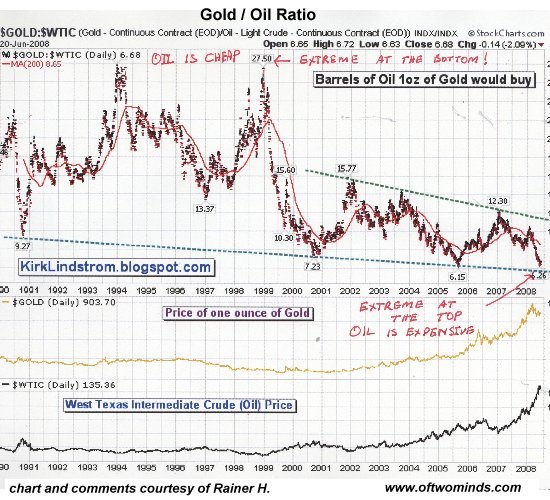 You are basically calling for a $8000 dollar gold price! Have you looked at the Commercial traders net short positions in Gold lately? Have you looked at the Market Vane report lately? The Market Vane Report I get weekly is one of the most important sentiment readings I can watch. When you get readings of 95% of the traders are bullish, this is extreme. This means there is nobody left to get in!

Is mankind really this stupid that they cannot come up with another fuel source? There are lots of ways and new technologies that can increase the supply of oil, totally by passing peak oil.

Another big source of oil is called "Coal Oil". South Africa has been running on "Coal Oil" for decades! Some of the figures I read is that the US has 248 billion tons of coal and it takes about 2 tons of coal to produce one ton of oil. The Coal oil alone can run the US for hundreds of years! China is talking about building coal oil plants.

Another big source of new oil is the Green River Formation oil play in the Midwest states. The shale oil deposits there are far bigger than anything in Saudi Arabia. They are also drilling below the Shale oil and they are finding oil deposits.

Another very big source of oil is the "Green Oil" production using "Green Algae" Algae Oil production is the hottest thing going right now and once production picks up it alone can replace all domestic oil needs. All you need for Algae production is some sunlight and lots of CO2. Algae just loves CO2. They are even breeding special strains of Algae to produce higher "hydrogen Content" in the Algae.

Thank you, Rainer, for this cogent analysis. Just to provide some further data for analysis, here are two additional charts, courtesy of frequent contributor Harun I.: oil/gold ratio (as opposed to the gold/oil chart above) and US dollar/oil ratio. 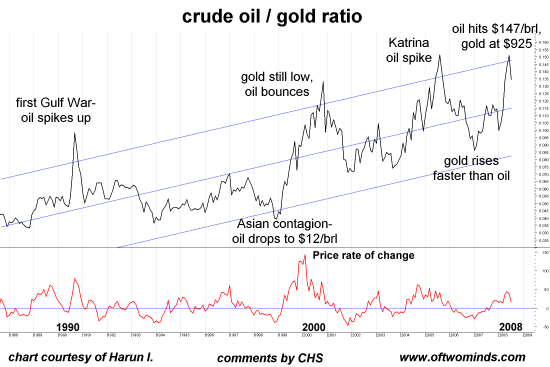 What I find noteworthy in this chart which is missing in the gold/oil chart is the very visible and long-term uptrend/channel. Here we can see that the recent spike in oil is still well within the channel, and that it was actually less extreme than the spike caused by hurricane Katrina a few years ago or the first Gulf War oil spike back in 1990-91.

This chart also illustrates how the ratio can fluctuate via one element rising and the other simply stabilizing. In other words, for the ratio to drop, gold need only rise, while oil can remain in the $125-$150/barrel range.

Furthermore, we must consider the uptrend, which suggests the oil/gold ratio could continue marching ever higher. What was once "extreme" then becomes average.

Lastly, consider that in terms of Rate of Change (ROC), the current ROC is well below the extremes recorded in 1999 as oil dropped to $12/barrel in the "Asian Contagion" financial crisis. In other words: while we as consumers may feel oil at $150/brl is an extreme, in terms of the oil/gold ratio it is well within long-term trendlines.

No discussion of oil is complete without considering the currency it is priced in globally, the US dollar: 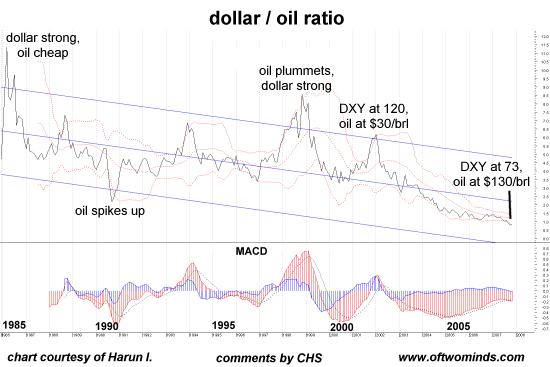 Here we see that oil at $147/barrel is still well within the long-term channel of the dollar-oil ratio. We must also note the long-term decline in this ratio, which suggests that the ratio can continue sliding ever downward without violating its long-term trendlines.

Both of these charts suggest oil could march higher without violating either long-term trend. If oil climbs to $200/brl and gold hits $2,000/oz, that would mean one ounce of gold would buy 10 barrels of oil--well within the range indicated on Rainer's chart.

Will the dollar reverse course and strengthen? That is the subject of another entry. For now, let's consider Peak Oil. While I agree with Rainer that other sources of energy are available, my sense is that the cost to develop them is staggering and the time needed to scale them up to replace 21 million barrels a day consumption in the U.S. and 85 million barrels a day globally will be long.

I see little evidence that "demand destruction" in the U.S. will make much of a difference in terms of global demand. As I noted in Saturday Quiz: Demand Destruction of Gasoline in the U.S. (July 12, 2008), a 300,000 barrel decline in gasoline demand in the U.S. is meaningless in a world where demand for diesel is still rising.

For every American who switches to a hybrid or stops driving a pickup in favor of the family sedan, there are 10 residents of China or India who are now riding a motorscooter instead of a bicycle. Their demand for a liter or two of gasoline just replaced whatever modest decline in demand the American chalked up.

I recently drove to Los Angeles, a trip of 375 miles. My (well-maintained) Honda Civic got 46 miles to the gallon, even with the climb up to the 4,000-ft summit of Tejon Pass and some stop-and-go traffic congestion in San Fernando valley. The trip cost me $37 each way. Even if oil doubled to $8/gallon, the $75 tab would be cheaper than flying. I saw little evidence of "demand destruction" on the freeways of LA, because the truth is there are few alternatives. Most people simply have to drive, regardless of the cost of fuel.

What we forget is that most stuff in the U.S. travels by truck. The railways are maxed out and it will cost billions to lay new track. In the meantime, everything moves by 18-wheeler.

At a truckstop on the way back from LA my wife asked a trucker about the mileage of his big-rig: 500-gallon tank, 5 miles to the gallon. There is simply no substitute for years to come to the demand for diesel.


Former Vice-President Al Gore recently challenged the U.S. electorate and "leadership" to replace foreign oil with home-grown electricity. Price tags for such an effort run from $1.5 trillion to $5 trillion; my own back-of-the-envelope figure for solarizing the economy was about $3 trillion, and that was not to replace transportation oil with electricity--that was just to replace oil-and-coal generated electricity.

Not only are there technical challenges, but I have to ask: in a nation with a near-zero savings rate, a nation burdened with horrendous debt, a nation facing staggering deficits in government spending, a nation which has misallocated trillions in capital which can never be extracted from the housing trap, a nation which faces financial losses in the trillions: exactly where will the $10 trillion needed to build an entire new energy infrastructure come from?

Let's not forget one other fact: cheap energy is gone. Shale oil costs about $70+/barrel to produce, as it requires prodigious amounts of energy to dig up and cook the oil out of shale or tar sands. Let's not forget solar, wind, tidal, etc. are all "competitive" with $100+/barrel oil, not $50/brl oil. That is, it costs a lot to replace the energy stored in oil. If you factor in the investment costs required to install solar, wind, algae, etc. and the new grid required to move all that energy around, it is not cheap.

In other words: the cost of energy from any source may well remain at or exceed the energy equivalent of $100+/brl oil.

There are 230 million vehicles in the U.S. Replacing them with higher-mileage or alt. energy-fuel-enabled technology will take at least 20 years. There are some 80 million buildings in the U.S. Lowering the energy use (increasing efficiency, insulation, etc.) of those structures will take time, too.

So while we move to alt. energies, slowly developing the capital, expertise and technologies to generate tremendous quantities of high-cost energy, what will we do in the meantime for energy? Oil is still "cheap" in many ways, easily transportable and high in energy density.

Maybe alternative sources of energy will be developed much quicker than I anticipate, but if so, the question remains: with what trillions, and from where, and at what cost? Neither money nor technology is cheap.

In trying to discern the future of energy consumption and generation, I hesitate to put much weight on any historical chart for a simple but profound reason: the permanent decline of cheap oil is a one-time event without precedent.

Thank you, Mary R.H. ($25), for your much-appreciated generous donation and kind words/contributions to this site. I am greatly honored by your support and readership.