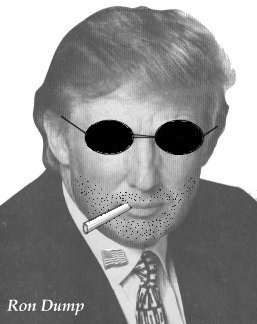 It's been a while since we checked in with trend-setting uber-investor Ron Dump, who was last seen pitching his "forget innovating products, innovate financial services" CEO seminar.

After laying low in his Bahamas tax shelter estate for much of last year, Dump has resurfaced--his "patriotic" lapel pin still firmly in place, just like the ones our beloved political leaders wear--to launch two new ventures which he describes as "huge, beyond huge, so galactically profitable even the Martians will be flocking in for a piece of the action."

The first business takes "creative destruction" to a new level, as described by the latest issue of "This Old McMansion": 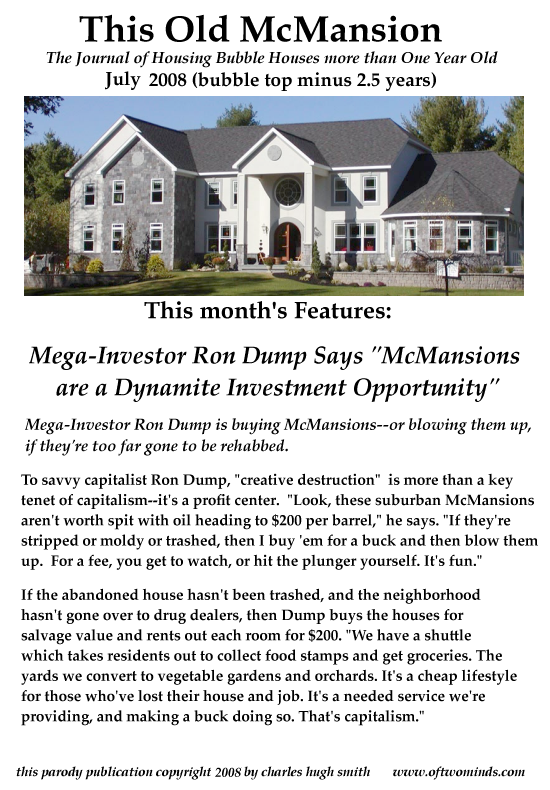 You gotta hand it to innovators like Dump--dynamiting McMansions is sure to draw thrill-seeking crowds seeking emotional closure on the housing bubble debacle, and the need for cheap tenement housing is sure to explode as millions more lose their houses and jobs. With rents rising in desirable cities, where better to warehouse millions of newly poor than abandoned McMansions in the distant exurbs?

His other venture is even bolder, if that's possible: chop abandoned SUVs in half and install recycled lawnmower engines into the hulks. Here is a visual depiction of the idea (with kind regards to Strawgold): 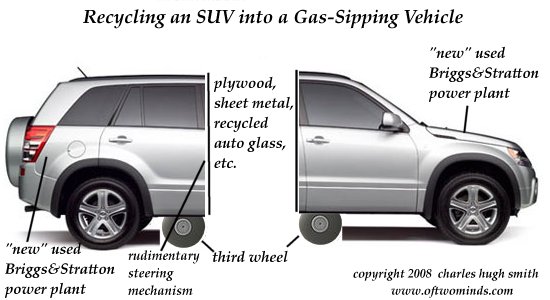 Dump waxes enthusiastically about the new venture. "Look, we have about 50 million more vehicles than we need, real gashogs nobody wants. Why sell them for scrap, when so few people can buy a new car anyway? We also have a bunch of unemployed blue-collar guys with nothing to do all day except watch TV, which is garbage. So get these guys a blowtorch, some old fan belts and other salvaged parts, and let them go to town on these millions of worthless SUVs."

Dump scoffs at the mechanical challenges of adding a steering mechanism to the rear half of an SUV, or stabilizing the front half with a small third wheel. "Listen, pal, we're talking about people with no transpo at all, zip, zero, nada, stuck in a crumbling McMansion in the boondocks without any rail service or even bus service. These people are crying out for some sort of affordable transportation, and so what if the steering wheel is now a stick, or the thing only goes 25 miles an hour downhill? The option is walking or bicycling, and with the roads going to Heck a bike ride can be bone-jarring. This way, you still get the comfort of a SUV seat and a nice soft ride."

With the three U.S. automakers heading for bankruptcy and even the Japanese automakers scrambling to retool their U.S. factories to make smaller, lighter vehicles, Dump is confident that "chopping and recycling" the tens of millions of existing vehicles is the real growth market for the decade ahead.

"I don't care what crap the TV pundits spout, unit sales of new cars will drop from 15 million a year to 5 million, tops. There's a big need for cheap transpo, and we're going to provide it in an ecologically sound way which will create tens of thousands of new jobs and spark all kinds of innovations. Instead of criticising me, the Mainstream Media should be calling me a hero. But to Heck with them, this is huge and I'm in on the bottom floor."

Note: the above is a reality-based parody.

Thank you, Wesley M. ($15), for your unexpected and generous contribution to this site. I am greatly honored by your support and readership.