The expansion of health insurance and government entitlements created "free money" and thus the explosion of healthcare costs. The solution is simple and "impossible": we all pay cash.

Here's why healthcare (a.k.a. sick-care) costs cannot be reduced; the entire system is based on vast pools of "free money." The corporate-America or union/government employee who goes to the doctor pays a few dollars for a visit and drugs; the "real cost" is of no concern. Ditto the "real costs" charged to Medicare and Medicaid.

The link between the "consumer" of healthcare and the provider has been broken for decades. There is no "free market" in healthcare--there isn't any market at all. We live in a Kafka-esque nightmare system in which "some are more equal than others" and hundreds of thousands of dollars are lavished on worthless tests, procedures and medications for two reasons:

1. because there's "free money" to pay the bills

There is a solution so simple and so radical that it is "impossible" (and of course you're reading it here): shut down insurance and all government entitlements, and return to the "golden era" of the 1950s when everyone paid cash for healthcare.

Here are the costs of childbirth as of 1952 at one of the finest hospitals on the West Coast, The Santa Monica Hospital: 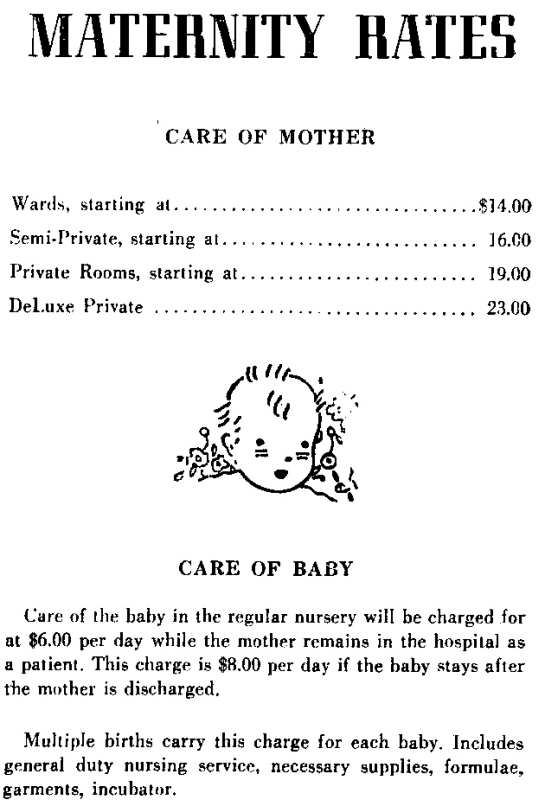 And here are the obstetrical rates: 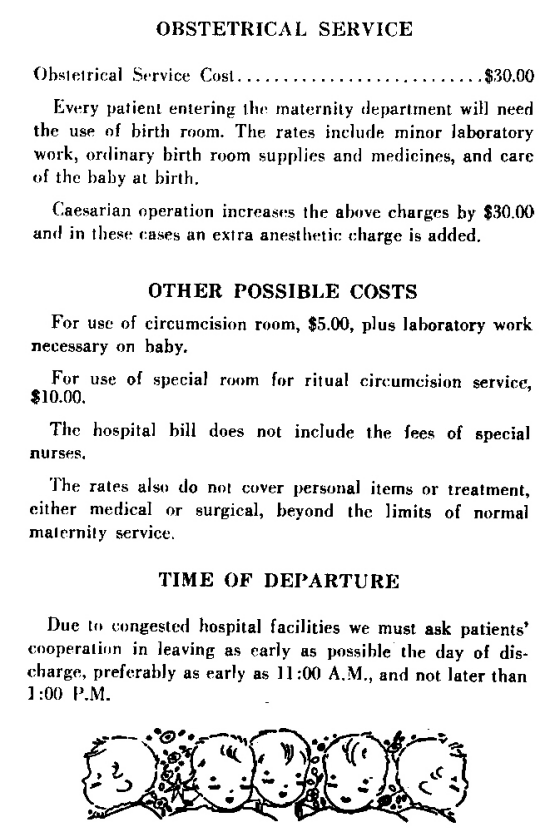 I know all the reasons why "costs had to skyrocket": we're getting so much better care now, right? Actually, as measured by death rates and any other metric you want to select, there is simply no way to justify a 40-fold increase (or is it 100-fold?) in medical care costs. The returns on all the "miracles of modern medicine" are in fact exceedingly marginal-- but nobody wants to talk about that.

In 1952, if something awful happened and a patient died, here was the response: "We're very sorry." Families weren't outraged; they expected people to die and interventions were not expected to be miraculous every single time. Doctor Kildaire and all his imitators on TV had not brainwashed the public into reckoning that if someone died, a mistake had been made. They also hadn't been brainwashed by the mental disorder known as "the American Legal System" into thinking that in every possible circumstance in life, there is liability, and the only question is where to pin it for the big bucks jackpot.

Stories about people suing doctors and hospitals for 5 times the value of a house ($1 million in today's money would have been $120,000 in 1952, when you could buy a nice house for $20,000) simply did not exist in the 1950s. The cultural mindset that someone somewhere must be at fault and it's a "right" to go after them did not exist. Since insurance was limited, there was no "free money jackpot" to go after, either.

I know you're probably outraged at the suggestion that "modern safety nets" of insurance and entitlements are the cause of our ills, but follow this idea through:

With no insurance or government program to bill vast sums, then every clinic, doctor and hospital in the U.S. would instantly go broke. Someone would pick up the pieces for $1 or whatever the auction price happened to be and start charging people $50 for a visit to the doctor--not a "co-pay" which was accompanied by a bill for $500 or $1,500 or $15,000 to an insurance company or the government, but $50 cash--that would be the total cost. People might decide they did not need to see the doctor every time they got the sniffles. They might ask the doctor if an MRI was really going to help diagnose their problem or if it was gilding the lily.

As for malpractice, maybe the clinics/hospitals would be non-profits. Go ahead and sue the bejabbers out of them--they have no insurance and no cash. Go ahead and win a huge settlement: you'll never collect because there's simply no money. The non-profit folds and another one buys the clinic for $1. With no giant pot of "free money" to pillage, the pillaging goes away. Hospitals which sought stupendous profits would presumably charge more, and hence would have fewer customers. It would be up to the consumer.

The solution to malpractice is information, not lawsuits. Based on my conversations with the M.D.'s who frequent this site, here are some simple policy/regulatory steps which would have very low end costs:

1. License all M.D.'s nationally so they don't need to go through the absurd waste of time and money being licensed in multiple states.

2. Make all information on clinics, hositals, surgeries, etc. public on the Web. Those doctors willing to take on the very ill will have more patients die than those who avoid the risky cases; it will be up to consumers to sort out the track record of the people who they choose to hire to attend to their health.

Something magical would happen to prices: they would drop to what people could afford to pay cash. Yes, those wonderful folks in the pharmaceutical industry could list their drugs for $10,000 a dose, but few would be buyers. Just as in other countries with no "free money" to tap, the price of that drug would quickly drop to $50. That, or the pharmaceutical companies can go bankrupt and let others fill the vaccum.

What would happen is simple: marginal care would vanish because few would be willing to pay for it. The cost of an MRI in China is a tiny percentage of the cost of an MRI in the U.S., and the machine and training of the technicians is the same; so why does it cost 25 times more for an MRI here? Because there's a pot of "free money" available to tap.

If the entire system collapsed and everyone paid cash, the cost of an MRI would be $100 or so, regardless of any other conditions. Or, the owners of the MRI machines could declare bankruptcy, sell the machines at auction and let someone else provide the service to those who decided it was worth the expense.

But what about the "poor people" who can't afford medical care now? Well right now they have to stand in line at emergency rooms--the most wasteful, inefficient system possible. Even "poor people" can afford a few dollars--there's endless excuses provided yet how many "poor people" have cell phones, eat costly fast-food, do costly illegal drugs, etc. etc. Everybody has choices; we're not all deranged, and for those who are deranged, then clearly the government will have a role in their care when it exceeds the capacity of their family or if they have no family.

Everybody's got an excuse in our current system, and perhaps that's why it is morally and financially bankrupt. The U.S. (and certainly not Santa Monica) was not a Third World nation in 1952; people did not feel their healthcare was deficient or poor. There was simply no money to pursue marginal returns except perhaps for a few millionaires seeking exotic treatments. Fine, it's their money; most died right along with the rest of us and at about the same lifespan.

As for "overall health" of the populace: what with the "diabesity" epidemic out of control due entirely to lifestyle changes, it's hard to say we've gotten 50 times healthier as a result of our healthcare costs rising 50-fold.

When it comes right down to it, the current system is based on this premise: the average American is too dumb to figure out healthcare for themselves and so we need a gigantic structure of "experts" to figure out what should be done and what it should cost. It's not even really "insurance" because everyone gets old, ill and then dies.

This has resulted in the most brutally inefficient and even cruel system possible, one in which the very elderly are milked for hundreds of thousands of dollars of "healthcare" in the last days or weeks of their lives while tens of millions get no care at all except at the emergency room. Since no one takes responsibility for their own health or healthcare costs, then people take poor care of themselves and thus many of our ills are self-inflicted. People save little to nothing for emergencies because they've learned to expect someone, somewhere, to pay for their healthcare. (It's a "right." Really? At whose expense? The Chinese who buy our debt?)

I know, I know--going to a market/cash system is "impossible." But the irony is that's where we'll be in a few years, regardless of what anyone thinks or wants: "healthcare" in its present incarnation will bankrupt the nation just as surely as the sun rises.