Is the Dow Jones Industrial Average rising in a manipulated rally or is it heading to new highs at 15,000?

Correspondent Peter B. is wondering why no one in the mainstream media is speaking to the obvious manipulation of the stock market:

I have been watching the markets(specifically the Dow Jones Industrial average) for a while and the last month has been very interesting. And yet I haven't heard any commentary on the blindingly obvious. For the last 8 trading days (11 on the Nasdaq), the market has gone straight up. The markets "never" just go up, let along straight up. Therefore this is "impossible" and can only happen in a manipulated circumstance. Likewise, several weeks previous to this, the markets tracked sideways for 5 trading days. The markets are never static or regular. A market doing the things that it is at present is no market at all, it is effectively insane - disconnected from any objective reality. That cannot be a good thing and yet I have heard no comments about it at all, everyone seems to be avoiding looking or seeing.

Excellent topic, Peter, thank you. The answer provided by the MSM is unequivocal: what manipulation? We're in a gigantic Bull market!

Charles Lemonides, chief investment officer with ValueWorks, says there's plenty of upside left, thanks to improving fundamentals. "When you have better economic conditions and really, really compelling valuations; and you're bumping up against the top end of a range its sort of a good recipe for breaking through that range and going significantly higher," he says.

By "compelling valuations," do you mean a PE of 116 on the S&P 500, when PEs at historical lows are around 6 or 7? Is a New Depression really "better economic conditions"?

Shall we be polite and observe that there is a considerable spectrum of opinion on the stock market's future trend?

Is the market being manipulated? To answer that, we might ask: but aren't all markets always being manipulated? And the answer is yes: the gap between those who know something the rest of the players do not know has always been exploited. Thus the trader in 1700 who knew an overdue Spice Trade ship would soon arrive in Amsterdam would be able to buy options on that ship's cargo value (zero if the ship sank, astronomical if it arrived safely) at a low cost due to the rest of the market being ignorant of the ship's whereabouts.

What's different about this standard exploitation of the knowledge gap is that the trading desks of major firms are now in collusion with the government and with the market exchanges. Goldman Sachs' "front-running" scheme of making trades milliseconds ahead of other trades required the collusion of both the exchanges and the toothless, corrupt "watchdog" agencies of the U.S. government.

The Federal Reserve and the Treasury have many tools besides collusion to boost a zombie stock market to new heights: flooding the markets with new liquidity, lowering discount rates to make money cheap enough it can chase high-risk stocks, and of course outright purchasing of futures and similar direct manipulations.

Then there's the stock-in-trade of market manipulation: phony accounting. Today Ford announced a $2 billion "profit" as a result of accounting trickery--yet the headlines scream "profit" as if the ailing automaker actually manufactured and sold vehicles at a profit.

Exploiting insider knowledge is the game plan not just of the stock market but of globalization. Economist Joseph Stiglitz, loathed in the halls of power for questioning the status quo, made the case in his book, Globalization and Its Discontents

Joseph Stiglitz predicted the global financial meltdown. So why can't he get any respect here at home? (Newsweek)

The work that won Stiglitz the Nobel in 2001 showed how "imperfect" information that is unequally shared by participants in a transaction can make markets go haywire, giving unfair advantage to one party. The subprime scandal was all about people who knew a lotlike mortgage lenders and Wall Street derivatives tradersexploiting people who had less information, like global investors who bought up subprime- mortgage-backed securities. As Stiglitz puts it: "Globalization opened up opportunities to find new people to exploit their ignorance. And we found them."

The same can be said of the stock market. For context, here are two charts, courtesy of frequent contributor Harun I., which I published earlier in the year. I have updated the first to show that the current rally has essentially run to the 38.2% fibonacci projection around 8900-9000, which coincidentllay marks the January 2009 high water mark of the Dow (9.060 or so).

The market manipulators would dearly love to goose the Dow above this mark, as that would "signal a new Bull Market." 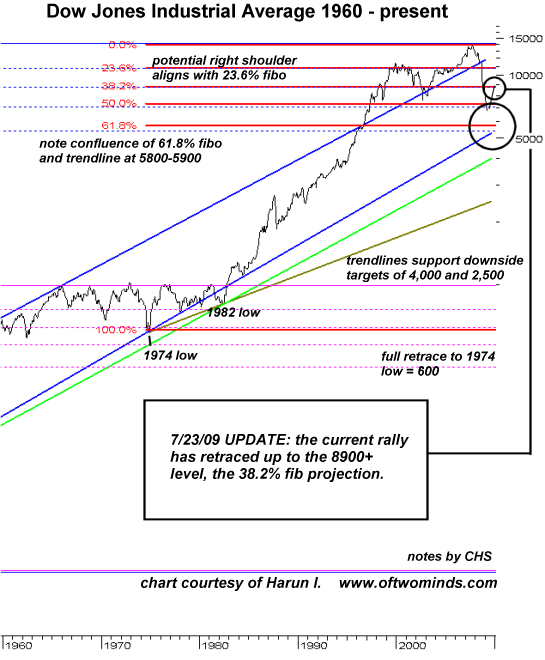 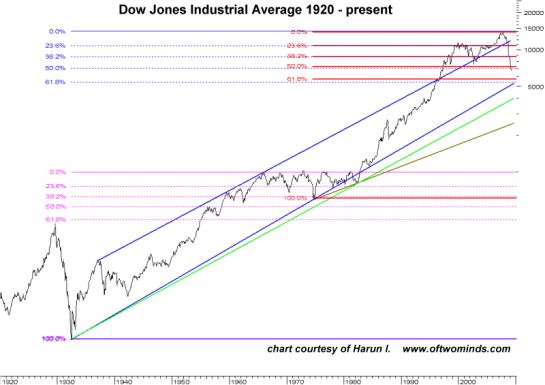 Can the market really make new heights as the economy implodes? As I type this, the players have boosted the Dow to the much-desired 9,000 level. Is this the start of the widely heralded New Bull Market?