Chinese citizens have poured their life savings into speculative real estate. This is not just misallocation, it is an inescapable capital trap.

China's citizens have few options for investing their immense savings. Chinese households are prodigious savers: China boasts a savings rate of 38%, fully ten times that of the U.S. But Chinese savers have few choices on where to invest their money: they can either leave it in a savings account which draws 2.25%, less than the inflation rate of 3.1%, or invest in real estate or domestic stocks.

The money pouring into property has created a worrisome asset bubble in housing, which rose 12.4 percent year-on-year in May, according to China's National Bureau of Statistics.

Chinese authorities' attempts to cool the housing market have so far yielded little result. With no other choice of where to put their savings other than domestic real estate and the volatile Chinese stock market (the Shanghai Stock Exchange Composite Index is down more than 21 percent this year), then there is little wonder why both the Chinese stock market and housing market have both experienced massive bubbles.

Despite the general mood of optimism fueled by rising property prices in China, history suggests that all bubbles end badly. The bubble in Chinese stocks certainly did; the Shanghai Index has fallen over 55% from its late-2007 peak.

The restrictions which effectively funnel China's vast savings into savings accounts that don't even match inflation or into speculative asset bubbles in stocks and real estate boosts the risks of serious losses for Chinese savers and investors, many of whom have relied on the savings of three generations to buy investment homes.

The key problem is that owning a few flats, purchased with cash, is perceived as equivalent to a savings account. But property is not like cash; it is illiquid, and it deteriorates to zero value if it is not well-maintained. This is especially true for highrises, which are the primary residential building type in China.

If the elevator stops working and is never repaired, what's the market value of a flat on the 12th floor?

Speaking of elevators, there is no need for an elevator to reach the 12th floor in this building: it fell over and is flat on the ground. 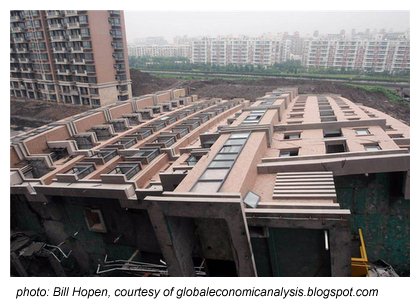 While the quality of construction has risen over the years in China, it suffers from various shortcuts and a cultural blind spot to the need for consistent maintenance. I addressed this issue in China's Towers and U.S. McMansions: When Things Fall Apart (Literally) (April 14, 2010).

I think people in China, for obvious reasons, don't often think long term. People are more worried about things that may happen tomorrow or in the next two or three years, than they are about what may happen in 50 years. But at some stage in the future, people will start to think more about the long term.

The quickly built but cheaply made buildings in Beijing will not literally fall down, but will deteriorate. Wall paint will peel and elevators won't work. Buildings will become uncomfortable because they will not have been properly maintained. That's when people will start to realize they've paid a lot of money to buy a place in the Central Business District and they've paid management charges, but nothing works and everything looks really poor. But the developers will probably be long gone by then, so I'm not sure what people will do.

Many buildings in Beijing are built with the cheapest materials available, which tend to degrade quickly. This is a worryingly common phenomenon. There are many buildings here that appear as if they are 10 or 15 years old, but are really just five years old. That's a little bit sad.

I have a 75-year-old apartment in New York, but it's still in great condition. You don't see that here. Fast and cheaply built apartment complexes dominate the property market here and there will be future consequences for this. And it might be apartment owners who end up paying them.

The apartment owners won't have any money to do so because they make $8,000 a year and paid $200,000 for their apartment. Here is Jim Chanos in BusinessWeek:

They (China's leadership) are on this treadmill to hell because 50% to 60% of GDP is construction. And if they stop construction, you'll see GDP growth go negative quickly. That's not going to happen because in China, people are rewarded at almost every level of government for making their economic growth numbers. The easiest way to do this: put up another building. So they're really hooked on this sort of heroin of real estate development.

The perception seems to be that China will grow out of this situation. But the problem with that argument is the real estate being built is not for the masses. This is not affordable housing for the middle class. This is high-end condos in major urban areas and high-end office buildings. Just to give you an idea, right now construction costs in China are starting to hit $100 to $150 per square foot in some cities. That doesn't sound like a lot by Western standards, but it means a condominium basically presented to you with no floors, no walls, no appliances costs the average Chinese two-income couple $100,000 to $150,000 U.S. That Chinese two-income couple in their 30s probably makes combined $7,000 or $8,000 a year. You do the math. Even if they were making $10,000 to $15,000 a year, they couldn't carry a $150,000 condo. This is very similar to someone making $40,000 in the U.S. at the height of our bubble buying a $600,000 or $800,000 house. We know how that ended.

You get rough concrete walls for your $150,000--no finished walls, no plumbing except stub-outs, no wiring except the panel box, no interior walls, and concrete floors. Even in China, where labor is still quite cheap, constructing your dwelling will cost a lot of money--$50,000 is a good ballpark number but it would be easy to spend more.

So the apartment costs 25 times the household's gross income. For a U.S. household making $40,000 a year, that is the equivalent of buying a $1 million condo.

The after-market for new flats in China is near-zero. Very few investors are interested in an "old" flat when there are thousands of brand-new ones available. The net result of this strong preference for new buildings and the widespread practice of owning mutliple units for investment is that there is virtually no market for residential properties that are even a few years old. Turnover in Chinese residential real estate is extremely low, on the order of 1% or less annually.

That means all residential properties in China are fundamentally illiquid; if you want to sell your three flats, there are few buyers. Should several million owners wish to sell their flats in a short time frame, the supply would completely overwhelm the feeble demand.

Dumping hundreds of billions of yuan into illiquid, mostly luxury dwellings is a catastrophic misallocation of capital in a country with an average per capita income of $3,000 per year. But that gross misallocation of capital is only part of the problem: since the vast overhang of luxury flats is illiquid and cannot be sold, these "investment properties as savings" are a black-hole capital trap: the invested capital cannot be turned back into cash.

Once the cash has been dumped into the black hole of illiquid real estate, it cannot escape; as with physical black holes in space, there is an event horizon beyond which the capital cannot be recovered. In China's real estate market, that is the moment when the buyer's funds are transferred to the developer.

This trapping of China's vast private capital in illiquid, rapidly depreciating investment properties will have far-reaching negative consequences going forward. When the time comes to transfer their "savings" back into cash, owners will find that their flats are worthless due to deterioration and/or the inability to find a buyer at any price.

All these luxury flats are speculative; many are empty and will never be inhabited. When the citizenry finally understand that the Central Government cannot stop prices from falling, or provide a deep, liquid market for re-sales, then panic will take hold, just as it does in the collapse of every bubble.

Unfortunately, investors in China will discover too late that luxury flats are not equivalent to cash in savings accounts, for the money only flows one way near a black hole: over the event horizon and into an inescapable capital trap.

Though many in China see foreign machinations at the root of every problem China faces, the real estate bubble/capital trap is entirely the result of domestic policies of the Central State. As the citizenry realize their savings have vanished down the black hole, authorities will be unable to plausibly blame foreign "hegemony."


Editor's note: Alerted by a Kindle reader to the gray text in Survival+: Kindle version, I fixed this error and uploaded the corrected file. Thanks to the reader who notified me, the Kindle version's readability is now enhanced.

To the long-suffering subscribers to oftwominds.com: To the question, what the heck am I getting for my $5/month contribution other than the usual swill I could get for free, I now have an answer: completely random special reports when I feel there is some outstanding opportunity to challenge your thinking on an important financial topic. These reports will only be available to subscribers and those who have made outrageously generous contributions to the maintenance of the site ($100 or more annually). This will be my way of occasionally offering a token of appreciation to the hardy souls who subscribe/ contribute despite the inconsistent quality and overly-eclectic topic selection of the site. There may only be one such special report issued a year; it is a random "thank-you for your support," not a monthly or quarterly report.

I should also mention that the suggested subscription rate will nudge up to $10/month in January 2011. As always, the site remains free, and any subscription is a voluntary donation in support of the site.