The usual debate about what's in the cards, deflation or (hyper) inflation, assumes the market or the Federal Reserve/Treasury will be the definitive factor. The more fruitful analysis starts with asking what benefits the Financial Power Elites who influence the process of governance. 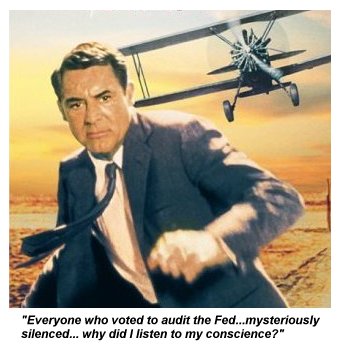 I have annoyed a great many readers over the years without intending to do so, and I risk doing so once again by invoking the term the politics of experience, which is the very core of the Survival+ critique.

Why is an analysis of the political nature of our experience so important? Because it sheds a unique light through the subtexts and smokescreens deployed by the status quo to mask the way specific policies benefit politically powerful players. By asking cui bono-- to whose benefit?--we can parse out why deflation or mild inflation is in the cards and hyperinflation is not.

Who benefits from high inflation? Those with debts to pay. Debts get easier to pay if inflation eats up 10% of the debt's purchasing power every year. If income and debt remain unchanged in nominal terms but income retains the same purchasing power, in five years of 10% annual inflation, the debt will have effectively been slashed by 40%. 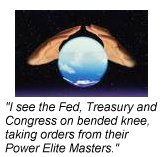 Take a $100,000 mortgage and a $100,000 salary which is roughly indexed to inflation. At a 10% annual rate of inflation, the salary will rise to $161,000 while the debt, though nominally fixed at $100,000, has declined to $59,000 in terms of what the sum will buy, i.e. its purchasing power. With a high rate of inflation, those owning the debt as an asset (the lender) suffer a massive 41% decline in the value of their asset while the debtor can pay off the debt with "cheaper" dollars.

So who benefits from inflation? Debtors. Who suffers dramatic losses? The owners of debt/cash. And who owes trillions of dollars in debt? the Federal and local governments, of course, and the average American household owing a mortgage, student loans, auto loans and credit card debt.

Who is sitting on $8 trillion in cash? Some insurance companies, mutual funds and pension funds--so-called institutional investors--are sitting on piles of cash, but a significant chunk of the cash is owned by the top 1% of households who own the vast majority of all assets--liquid and fixed--in the U.S.

Please see The Stock Market As Propaganda (March 10, 2010) for the sources and facts.

Since 91% of stocks are owned by the Plutocracy, the much-ballyhooed rise in the stock market as proof the recession is over is perception management/ propaganda.

The stock market isn't about building middle class wealth, and the middle class seems to have finally figured that out. The equity market is all about concentrating wealth and managing perception: if the top 10% is doing well, then the bottom 90% are supposed to feel better about the whole thing, too, even if they are poorer by every financial metric.

While debt loads are heavy in many of the 117 million bottom 90% households, cash and other liquid assets are concentrated in the top 10% and especially the top 1%.

So if high inflation is bad for the Power Elites who own 75% of the productive assets of the nation, and this same Power Elite wields unassailable influence over the processes of governance (Congress, the Fed, the Treasury, etc.), then why would they allow the Fed and the Treasury to inflate away their wealth?

The standard analysis sees the Federal government acting in its own interests, and as a major debtor, it is assumed the Central State will actively promote high inflation as a way of reducing its monumental debt load.

The flaw in this thinking is obvious: why would the Power Elite which controls Federal policy allow its wealth to be destroyed just so the government's own debt load would be reduced? That makes no sense. In fact, as I suggested in The Con of the Decade Part II (July 9, 2010) and The Con of the Decade Part I (July 8, 2010), it is in the interests of the Power Elite to buy Treasury bonds once interest rates rise. The last thing the Financial Plutocracy would want is to see its trillions of dollars in Treasuries diminished via inflation.

The last thing the Power Elite wants is high inflation. Remember this and you hold the keys to the Kingdom: inflation only benefits debtors, not the owners of the debt, for whom that debt is a treasured asset. Deflation is anathema to debtors and a free gift of additional purchasing power to those holding cash.

The typical analysis focuses on the horrendous debts owed by the nation and its citizenry, but the politically important focus is to look at who owns all that debt.

Much attention is paid to the $900 billion of Treasury bonds owned by the Chinese, but this is really only a small slice of the trillions of debt owed by governments, companies and households in the U.S.

Here is a key question: how much political influence do debtors wield in the U.S.? How many Congresspeople are (in effect) in indentured servitude to mortgage holders, those owing student loans or even to corporations with big debts? I would reckon the number of "captured Congresspeople" owned by debtors to be near-zero.

How many are influenced by owners and/or servicers of debt? Virtually all of them. Check in with any expert in finance--for instance MIT professor Simon Johnson--and you will find that the heavily touted "financial reform" is all smoke and mirrors; Johnson stated flatly, "The big banks won."

The deflation-inflation question boils down to politics, not the markets or what might be in the best interests of the Central State. The Central State is beholden to those who influence the machinery of governance via political contributions and armies of well-funded lobbyists.

So-called "progressive" lobbies like public unions could care less about deflation or inflation; all they care about is maintaining their share of the tax revenue swag. That leaves the field wide open for those who own the debt and the cash/liquid assets.

As I explain in Survival+, the Savior State and the Financial Plutocracy are best understood as a partnership, but by no means an equal one. If the Elites running the Central State cross the financial Power Elites, their days in power are numbered.

Since the Financial Elites (and China, too, if reports are to be given credence) are in short-term Treasuries rather than the long end, then a whiff of inflation does them little harm. But deflation does them no harm and offers a very pleasing lagniappe of additional purchasing power as cash and other liquid assets increase their purchasing power (that is, cash buys more goods and services next year in deflation than it did this year).


Editor's note: Alerted by a Kindle reader to the gray text in Survival+: Kindle version, I fixed this error and uploaded the corrected file. Thanks to the reader who notified me, the Kindle version's readability is now enhanced.

To the long-suffering subscribers to oftwominds.com: To the question, what the heck am I getting for my $5/month contribution other than the usual swill I could get for free, I now have an answer: completely random special reports when I feel there is some outstanding opportunity to challenge your thinking on an important financial topic. These reports will only be available to subscribers and those who have made outrageously generous contributions to the maintenance of the site ($100 or more annually). This will be my way of occasionally offering a token of appreciation to the hardy souls who subscribe/ contribute despite the inconsistent quality and overly-eclectic topic selection of the site. There may only be one such special report issued a year; it is a random "thank-you for your support," not a monthly or quarterly report.

I should also mention that the suggested subscription rate will nudge up to $10/month in January 2011. As always, the site remains free, and any subscription is a voluntary donation in support of the site.