Facebook will never be very profitable, for it is a utility which will never be able to charge its users. Its free functions are more valuable to marketers than its advertising, hence it will never generate big ad revenues.

Why am I not surprised to read that Facebook has the same customer satisfaction ratings as hated cable providers and the I.R.S.?

A new study by ForeSee Results and the American Customer Satisfaction Index finds that U.S. consumers regard social media sites Facebook and Myspace as lowly as they regard cable providers, airlines and the I.R.S.

Facebook is in essence a utility like cable providers, but with one important difference: it can't charge its users. Users view Facebook as a free utility, and tolerate it because it's free.

Even global corporations prefer its free functions to actually paying for adverts. In a dynamic peculiar to the Web, Facebook's very ubiquity as a platform for free marketing and networking make those features much more powerful than paid advertising. Thus advertisers will inevitably be drawn into exploiting the free aspects of Facebook rather than pay a premium for adverts which are ignored. 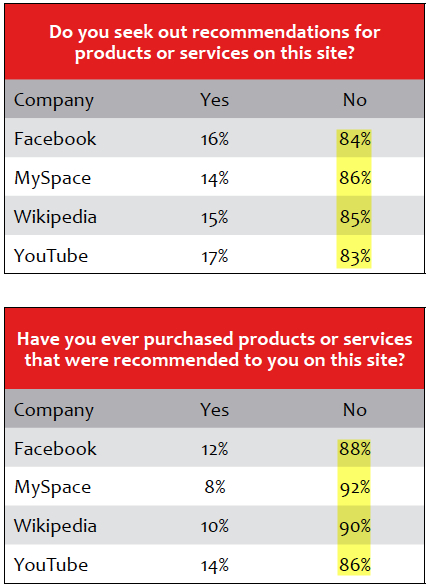 The big hype in social media is exploiting the trust implicit in "friending" for profit. This will degrade the very trust the marketing seeks to exploit. So not only is Facebook unable to charge its users or charge a premium for adverts when its free services are so much cheaper and more effective, the "platform" itself will intevitably be degraded by the relentless counterfeiting of "friends," "likes," etc. which have created its supposed "value" as a platform.

As the chart above illustrates, most Web users disregard banner adverts, and this poses a problem to both the social media companies and their potential advertisers: how can they break through the marketing clutter which most users tune out? If social media companies fail to offer adverts which actually work for their advertisers, then they won't be able to charge premium rates for ads.

Facebook collects significant revenues from purveyors of online services and games such as Zynga's FarmVille, but the big money is in advertising--a field that both Twitter and Facebook are still exploring.

Facebook is attempting to make use of its vast user base in tailoring ads which are not just contextual to the content but to their social context.

When somebody writes about their mortgage on their blog or Facebook page, then the search engine will place an advert for mortgage rates on that page: that's contextual placement.

The social-context ads, which Facebook introduced about a year ago, are based on data it collects on the "likes" and networks of friends of its users. These social-context adverts appear on the right side of a user's homepage, and along with the ads are the names of any of the user's friends who previously clicked that they like the brand or advert being displayed. Users can then click a button to add their "like" to the ad or brand.

The basic idea is to enable the gold standard of marketing: word-of-mouth. Despite all the studies, metrics, and innovations, successful marketing campaigns are still largely based on good old word-of-mouth. Thus the hope for social media companies and their advertiser alike is that the global networks of friends and colleagues assembled in Twitter, Facebook and other social media leaders can be used to spark successful word-of-mouth campaigns.

Two challenges have emerged to this "stimulate word of mouth" strategy: one is the inherent ambiguities in tracking the effectiveness of any such campaign, and the second is that marketers and promoters are busy exploiting the trust and loyalty which are the foundations of social networks.

The metrics of online media is so important to the Web that an industry has arisen to fulfill that mission, and a professional conference, the International Conference on Online Media Measurement, was recently held in Lisbon, Spain.

One attendee was David Tiltman, a journalist who has covered the field for years. Tiltman concluded that the industry has no standard metric to measure "buzz" (word-of-mouth) or effectiveness and thus advertisers are bombarded with terms such as "engagement" and "conversation" rather than meaningful metrics.

A number of companies have sprung up to measure the "buzz" created by ad campaigns on social networks. According to Tiltman, "When one delegate asked five different word-of-mouth measurement companies to track his Superbowl ad, he got five different responses. These services sell themselves as tracking tools, but actually they are hugely reliant on human input to categorize brand mentions on social media."

In other words, counting friends or clicks is not a very useful metric.

One way marketers seek to influence social network users is to inflate the number of "friends" and Twitter followers by purchasing thousands of friends and followers online.

They also deploy Sponsored Tweets and paid referralsusers are paid to re-tweet Tweets promoting some brand or advertto create what is in effect a fake word-of-mouth campaign that will supposedly ignite a real word-of-mouth buzz.

This dilution and exploitation of social networks may well cause users not to trust any marketing they see on social networks, which would lower the value of social media to advertisers and marketers.

Tiltman described a conversation with a big-name advertising client who was wary of such a metric-free, easy-to-game environment: "Without a proper currency online that allows some sort of comparison between media, he cannot advise heavy spend in digital."

Companies deciding between traditional advertising campaigns which funnel revenue to the social media companies like Facebook and "viral" word-of-mouth campaigns waged via Tweets and inserting product placement in conversations between friends have little to go on.

"It fundamentally comes down to why people are there on social networks. They are not there to read our ads. They are there to talk to each other," says Scott Monty, the respected head of social media at Ford Motor Company.

Rather than spend millions on traditional ad campaigns displayed on Facebook, Ford uses the site's free options to assemble networks of fans who share photos and stories about their Ford vehicles online.

The net result: potential advertisers will simply use the free tools these networks offer to market their products and services, leaving the social-media companies with little big-dollar advertising.