All markets, even quasi-manipulated ones, eventually succumb to supply and demand. The fundamentals of U.S. housing are simple: massive supply, falling demand.

The theme this week is following the consequences of simple supply and demand. The U.S. housing is completely out of balance: supply is monumental and rising, and weakened demand is falling.

Mike Larson of Weiss Research recently said, "Demand has fallen off a cliff in the wake of the tax credit expiration, with pending sales falling by the biggest margin ever to the lowest level ever."

Absent the tax credit, where will new demand come from? As the FDIC showed back in 2006, everybody who could afford a house--that is, those were not in poverty and who were creditworthy--already owned a house. This is the underlying reason why homeownership was maxed out at 64%.

A massive credit bubble boosted ownership to 69%, and now the bursting of that bubble is not only taking down the 5% who would never have qualified before the bubble, but the 10% of owners who are now marginalized by excessive debt and/or declining household income.

In effect, the entire effort to "save homeownership" is doomed because those losing their homes cannot afford them. This may sound absurdly "obvious," but that's the tricky part of how the politics of experience constructs and defends the ecology of power: massaging away what is "obvious" and erecting a "new obvious" is how power is maintained and extended.

Meanwhile, the supply of homes for sale or in default marches ever higher in all price segments.

To the shock of those analysts who claimed that higher-end homes were holding up better than the rest of the market, the delinquency rate on investment homes where the original mortgage was more than $1 million is now 23 percent, and a staggering one in seven homes over $1 million is in default. The posh Beverly Hills zip codes have seen prices decline by 31%.

We are all subprime now.

Unsurprisingly, lenders are worried that many of the 11 million homeowners who owe more than their house is worththat is, the 24% of homeowners who are "underwater"-- will walk away from their mortgages, especially if the real estate market rolls over again. Such an increase in strategic defaults would burden lenders with even more unsold homes-- the "shadow inventory" because lenders don't always list a newly foreclosed home for sale immediately.

This shadow inventory could reach as high as 7 million homes by some estimates; other analysts reckon it will take 103 months (about 8.5 years) to clear this gigantic inventory of foreclosed, distressed and defaulted homes.

Consider a fact that might be considered staggering in an environment in which "obvious" isn't quite so manipulated: the total number of vacant dwellings in the U.S. increased to a record 19 million in the first quarter of the year, up from 18.9 million in the fourth quarter. As new homes continued to be constructed, the housing inventory rose last year by 1.14 million to 130.9 million, while occupied homes increased by 1.07 million to 111.9 million.

The Census Bureau reckons about 4 million of those vacant housing units are vacation or second homes. Even if millions more of these vacant homes are in undesirable areas few or suffering from severe structural issues, that still leaves well over 10 million vacant dwellings in the U.S.--a truly monumental overhang of supply.

This inventory of vacant and/or defaulted dwellings is not static: as this chart illustrates, the inventory of defaulting loans reverting to Fannie Mae, Freddie Mac and the FHA is rising. 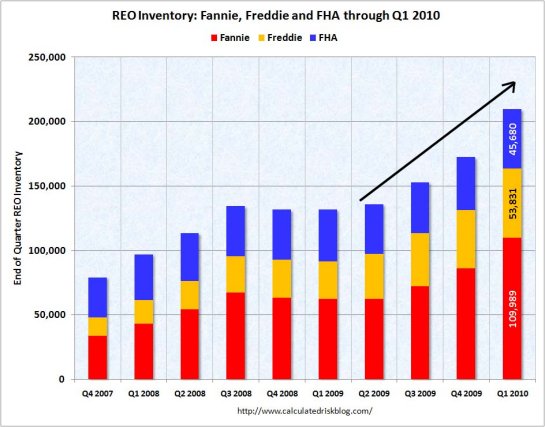 Then there is the looming surge of mortgage re-sets which will continue through 2012:

Given the imbalance between supply and demand, some housing observers are issuing forecasts of 50% declines in housing values.

As I have noted here many times, the intervention in the nation's mortgage market by the Federal Reserve and the Federal government via its GSEs Fannie and Freddie and its housing loan agencies FHA and VA, is absolutely unprecedented in size and scope.

Government-backed loans accounted for 99%, or $1.5 trillion, of mortgage securities in 2009. Banks and other private firms have issued a mere $15 billion. In addition, the Federal Reserve and Treasury have spent nearly $1.25 trillion buying those bonds to support the housing and broader credit markets. "The government is literally plowing trillions of dollars into the U.S. mortgage market to keep it afloat," says Guy D. Cecala, publisher of Inside Mortgage Finance.

And what has been the result of this complete Federal/Fed absorption of mortgage risk? A very modest blip up in home valuations, in certain highly desirable areas of the nation. This is marginal returns writ large: 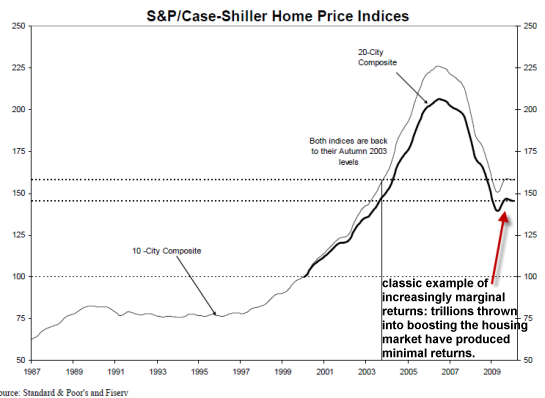 The Federal Reserve's exit from buying mortgages (if in fact it has actually ceased propping up the nation's mortgage market) will eventually cause mortgages to either rise in cost and/or become less readily available. Some analysts see this unprecedented Fed intervention in what were once largely private mortgage markets to be a development with highly negative consequences going forward.

It is an understatement to say that the Fed, the Federal Housing Administration (FHA) and the government-sponsored housing agencies, Fannie Mae and Freddie Mac, have not managed mortgage risk very well; FHA problem loans have risen to 24% of all loans originated in 2007, and taxpayers face $1 trillion in losses on Fannie and Freddie alone in the years ahead.

The U.S. housing market is one defined by a rising supply and faltering demand, and a total dependency on a mortgage market propped up by government or quasi-government agencies which have shown poor risk management in service of sustaining or reinvigorating an unsustainable credit bubble.

These stupendous government interventions have simply staved off the consequences of the supply-demand imbalance for the past two years. At some point these interventions will fail and the returns on the investment will go negative: all the trillions of dollars committed to propping up housing prices will fail to boost prices at all.

At that point public support for the prop-job will evaporate and the market will finally get a chance to clear the imbalance between supply and demand.


Thank you, readers and contributors: As a result of your readership and support, oftwominds.com is now a Page Rank 6 site. This may not seem like a big deal, but the Google Page Rank is a basically impossible to "game" measure of influence: not just the number of visitors or links, but a measure of link-ins, scope and reach of content, etc. I am honored and humbled to reach PR 6. Special thanks to Mary for suggesting the cool "Page Rank history" graphic in the right sidebar.

Order Survival+: Structuring Prosperity for Yourself and the Nation and/or Survival+ The Primer from your local bookseller or from amazon.com or in ebook and Kindle formats

. A 20% discount is available from the publisher.