Will the Stock Market Crash Before the Mid-Term Elections?
(July 19, 2010)


If history is any guide, the U.S. stock market will continue falling right into the November elections, decimating any Democratic argument that their party has energized the economy. Given this potential for an electoral drubbing, we can expect massive intervention to prop up the market.

Will the stock market tank heading into the 2010 mid-term election? History suggests yes, but my contrarian sense has some doubts.

Correspondent/analyst B.C. recently posted a chart on his excellent weblog Imperial Economics which shows that historically, stocks decline in the second year of presidential terms: 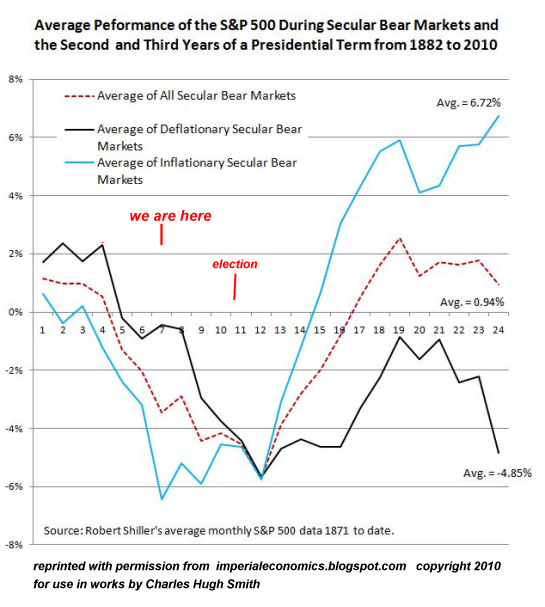 A second chart maps the Nikkei stock index from its 1989 bubble top, the Great Depression-era S&P 500, the NASDAQ dot-com bubble and pop, and the Shanghai stock index's 2007 peak and decline. Once again, this chart suggests that the 2010 election will occur in a stock market trough:

The black line is the NASDAQ, which peaked in early 2000 (around month 115) and hit bottom in March 2009 about nine years later (around month 225). It topped out in late April 2010 and has been sliding since. If it tracks the other historical indices shown, it will decline for another 36 months (mid-2013).

None of this is carved in stone, of course, but it is an interesting correlation to consider.

Meanwhile, the U.S. economy is tanking. B.C. kindly offered up this chart of the ECRI's WLI growth rate, which is dropping to recession levels. 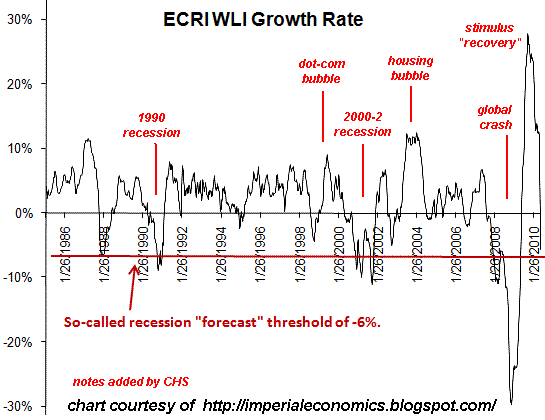 This is the backdrop for either a mini-crash or a full-blown crash of the stock market--something which occurred with alarming regularity in the last Great Bear Market, and even earlier Bear markets, around mid-term elections.

On the other hand, the Obama Administration and the Democratic Congress have faithfully carried Wall Street and the "too big to fail" money-center banks' water since taking office in 2009. Treasury Secretary Geithner, Federal Reserve Chairman Ben Bernanke, Wall Street and the big banks have gotten everything they wanted, with only modest window-dressing of "reforms" for public consumption.

While the Democratic lackeys did the heavy work, the Republican toadies were content to run interference for the bankers, proclaiming their resistance to any reform which would place a burden on business as usual. (Not to Repub obstructors: exactly what were the consequences to the U.S. economy of the financial deregulation you lauded so warmly over the past decade? It crashed.)

Just as gasoline prices magically subside right before elections--at least they did during elections when Republicans held the White House and the majority in Congress-- I have to wonder: what's the point of being able to print hundreds of billions of dollars if you don't goose the stock market to help out your political lackeys in their hour of need?

Don't the Democrats deserve some small consideration from the Fed, the Treasury and Wall Street for providing them everything they wanted in a difficult political environment? Does the Fed really care if the Republicrats or Demopublicans are in the majority? Perhaps they prefer some form of stalemate, as this leads to a comfortable deadlock in which no meaningful regulatory legislation gets passed.

As it stands, the Democrats face a potential wipeout in November. If the stock market crashes in July, August and September, that would seal a Democratic defeat of potentially epic proportions. If I were in the Fed (or Treasury), and my compliant political lackeys were facing an electoral defeat of epic proportions, then I might conclude that a crashing stock market might be a wee bit more disruptive than would be good for the status quo.

Look how bearish and choppy the market looks now. If there was ever a market issuing a high, keening plea for massive intervention to stave off a collapse, it's this one: 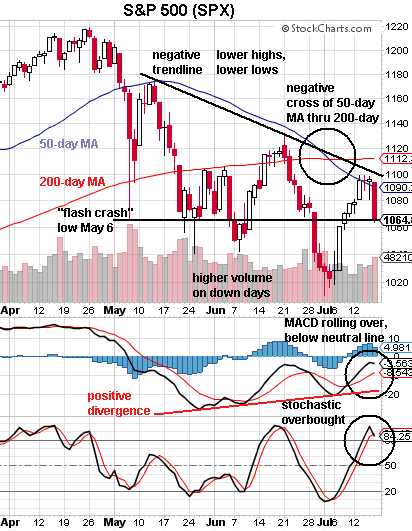 This is one ugly chart.

About the only bullish technical here is a mildly positive divergence in MACD, which is trending higher even as price declined to new lows. But divergences can continue for quite some time, and that one factor is not much of a bulwark against the tide of bearish technicals.

If I were in the Power Elite tasked with saving the Democrats from a complete rout in the November elections, I would choose to intervene right here, during the low-volume days of summer when intervention has more bang for the buck. I would also choose to intervene right here for technical reasons; if the market is allowed to notch a lower low and break the 1,000 level, then that would very likely trigger a cascade of selling that would be tough to stop.

A much better strategy would be to flood the market with futures buying to drive it up to a marginally higher high--that is, above 1,100. Technically, that would break the downtrend line and create the illusion (if nothing else) of a new uptrend.

Right now would be the perfect time to jab a big fat needle in the market because sentiment is almost universally bearish. Hobby Bears are piling in, grinning with delight at the prospect of such an "easy" trade (piece of cake profits, just go all in short!), while weak long hands are folding their cards and selling.

Nothing would stun this market more than a nice little 50-point rally in the SPX that forced overly-confident shorts to cover. Countering a massive wave of selling is almost impossible, but if the Powers That Be can nip this decline in the bud, so to speak, and force Bears to cover their shorts, then a more orderly decline can be arranged after the election.

Is it really too much to imagine Geithner et al. getting private calls from the White House along the lines of, "Guys, we could really use a hand here with the stock market." After all, propping up the market as a proxy for the U.S. economy has been the strategy all along, and the worst time for the strategy to collapse in a heap is right before the mid-term elections.

The key target, if it were my job to engineer a rally that would last longer than a few days, would be the 1,110-1,130 level of the SPX. Juicing the market above those levels would cause all but the hardiest Bears to cover, and it would trigger gigantic waves of black-box buying as the key levels of resistance would be broken.

If you could print unlimited sums and intervene at will in the market via proxies, how hard would it be to engineer a 50-point rally in the SPX in low-volume July? If you waited until the market fell to new lows, it would be too late and the momentum would gather on the downside. SPX 1,040 to 1,060 is the Rubicon; now is the moment to call in the legions and defend the market with everything you have.

We know intervention is a reality, and we know these key technical levels are in danger of being breached. Put those facts in an election context which is looming as a disaster for the party in power and you get a scenario which should give overly enthused Bears pause.