The roots of suburbia extend deeper into Cold War policy than most of us know.

The built environment (roads, railways, structures and towns/cities) is integral to any understanding of energy, resiliency, fragility, society and the economy. Any discussion of energy consumption must include the fact that roughly half the energy consumed in the U.S. is used to heat and cool buildings. No discussion of transport or economic strength is integrated without an understanding of rail and seaports, and their vast efficiencies.

To mention one example out of hundreds: the construction and marketing of distant suburbs (exurbs) as the ultimate extension of the suburban lifestyle has strained the American family to the breaking point via crushingly long commutes; wage-earners have no time to spend with their children because their waking, productive hours are spent getting to work, working and then crawling home exhausted.

Thus the built environment has a direct causal effect on divorce rates, teenage alienation and the "bowling alone" isolation and ennui that characterizes so much of American life.

A long-forgotten, underappreciated aspect of encouraging widely dispersed suburbs was rooted in Cold War defense against nuclear attack. Planner/correspondent Tom Christoffel alerted me to this fascinating connection between military/defense policy and the effective abandonment of cities in favor of suburbs in the poast-World War II era. Here are Tom's comments:

This is an unrecognized if not forgotten history of the roots of sprawl in the U.S. as a defensive measure. The outcome of the defense was similar to that of the attack it was meant to survive - a cratering of the cities.

Although incorporation of the automobile into city design began early in the century, it has been since the 1950s that American housing, retail and employment sites  the business campus, have been designed for the automobile. Distances are unwalkable and very often there are no sidewalks to connect buildings.

There are very few cities where owning an automobile is optional. Jurisdictions are cities in name and legal structure only. New urbanism is simply an attempt to accommodate the car.

There are many reasons for this. I was employed as a regional planner from 1973 to 2008. The physical landscape looks densely built, but household size is low, auto use is high, and effective densities continue to drop.

Stewart Brand has some positive things to say about cities. Few Americans do. They fear density, but do not understand that was built into the cake of the 1950s Cold War.

Few people are aware of the extent to which Federal policy and spending favored suburbs and auto-centric development in the 1950s, 60s and beyond. New housing could have been promoted within cities; indeed, in the college town I live in, dozens (I haven't counted but very likely it is actually hundreds) of low-density single-family homes from the Victorian era were torn down in 1945-60 and replaced with high-density, 2-and-3 story apartments. Suburban development was not "required" solely by pent-up demand for housing.

In ways too numerous to recount here, Federal spending favored suburban sprawl and thus underfunded urban centers, effectively abandoning them to benign neglect except to tear great chunks out of the urban core to accomodate new 8-lane freeways--a form of "city-cide" in many cases as the new freeway gutted the fabric of neighborhoods and commercial districts.

Tom followed up our email "conversation" with this enlightening commentary on related topics:

When I started my education in planning in 1971, I learned that much of the design of cities had to do with defense and security. Walled cities were made obsolete by cannons. 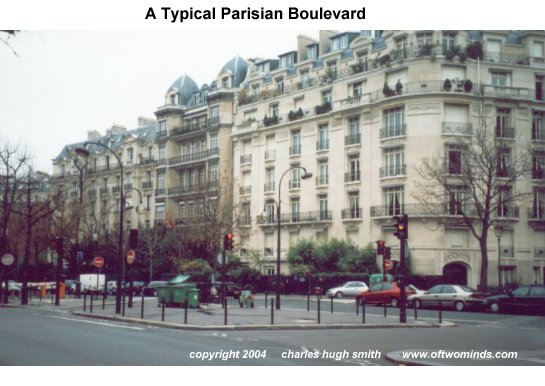 The boulevards of Paris designed by Baron Haussmann were intended, in part, to allow the army to isolate rebellion in sectors of the city. That was something the crooked streets that the cumulative growth of the city did not allow. Ultimately that served the government, the people and their city. 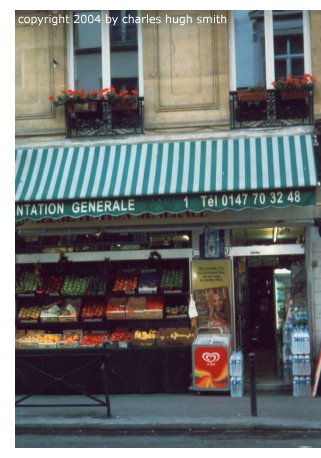 Heres another Paris factoid. The Eiffel Tower was to be taken down after the world fair. The police had mounted communications antennae on it and therefore wanted it kept up. It was perhaps then the first cell tower. The Eiffel Tower and Space Needle, it seems, became predictive of our future landscape.

Defensible boundaries are part of human settlement patterns because they are necessary. There needs to be internal security as well. Jane Jacobs observed how that was done by the people on the streets in the neighborhoods of NYC.

Now there are many places where it isnt safe to be a pedestrian  the auto/SUV is also urban armor.

In a city, where there are people on the street, it is generally safe  alertness is required. In small towns, people tend to know who they are seeing, so a lack of people is not frightening.

1) Community precedes cooperation.
2) Community is how life solves all problems.
3) Security is the primary purpose of community.

Security was a concern at the end of the war  fear of a Nuclear Pearl Harbor  a surprise attack over the poles. They just didnt think through the full impact of a dispersed population.

While the shift is often attributed to white flight, it wasnt until the 60s that court ordered school desegregation began to happen. By then  sociologists already noted the negative impact of the suburbs on women  stay at home mothers with no local family, as had been the historic pattern. The song Mother's Little Helper by The Rolling Stones, 1966, was "a little yellow pill." There was also a lot of alcoholism in women, though the psychiatrists didnt catch it at the time.

Today people leave suburbia for more land  five acres and a riding lawn mower in the Shenandoah Valley or in the Piedmont along route 29 on the way to Charlottesville. They think they are getting privacy, but only more isolation. As they age and want EMS there in five minutes, the service cost goes higher because the population density is so low. Add more stations, a smaller population served. A found a comment like this from a Florida County administration in a news report.

I dont have a solution  but unless the true intent of dispersion (aka sprawl) is recognized, we wont be able to adapt.

The move to suburbia served many interests, such as the land speculators which, in total, have led to a misallocation of capital in the U.S. to housing and personal transportation. You cant build an economy on that, but Ive not found anyone saying that.

In the mean time the U.S. has become more anti-city. Notions of urban and metropolitan, mushy terms because they bring together a host of services which have no common administration, whereas an incorporated city  the municipal corporation under the laws of the State is the government of the people. Its purposes are different than those of counties, which are units for law and order  a Court, Sheriff and deed books for recordation of land transactions, etc.

Consolidations and mergers take time and may be opposed because people like their local identity. Much can be accomplished with functional regionalization of services that respond to economies of scale. Regional communities of communities are emerging in my view and the observation of this is the purpose of my blog. Having a common umbrella regional name that people can work under is important. Then groups can align.

As we work for a better human civilization however, it appears that the money changers have come to be in control. Ive been trying to understand the issues and causes for the past three years. Michael Hudson has been a source of an historical perspective on how we got to where we are today: Michael Hudson archives. It includes some of his Guns & Butter interviews with Bonnie Faulkner if you are familiar with that.

Thank you, Tom, for a fascinating precis on civil defense and urban/suburban planning. As energy security trumps "defense" against nuclear attack, then the reliance on dispersed-population/autocentric policies needs to be re-thought.