If the economy continues declining into late October, there may be two landslides in the making: the stock market and the presidential election.

There is nothing particularly partisan about this possibility; people who vote tend to vote their pocketbooks, and a re-election campaign that boils down to "hey, it's not as bad as The Great Depression" is unlikely to inspire great loyalty in voters who are already culturally predisposed to tire quickly of presidents, wars and a tanking economy.

If the economy and stock markets are both slip-sliding away, the opponent need only be "not the incumbent" to win.

Presidents facing re-election in deteriorating economic conditions find their support in the critical non-partisan middle is a mile wide and an inch deep. A recessionary economy acts like a drought on that shallow lake of support, and when it dries up then the incumbent loses, and often loses big.

Let's consider the critical backdrops of the economy and stock market: household income and corporate profits. Market bulls like to tout rising profits as the reason the market can keep climbing higher in a global recession, but before we get too euphoric let's recall that the earnings of 90% of American households have been flat since 1970.

All those fabulous profits were built on two now-crumbling edifices: astounding levels of household debt and a declining U.S. dollar that boosted the critical overseas profits (40% of all profits) via currency devaluation. Now that the dollar has broken out of a multi-decade downtrend and has been rising for a year, those tailwinds have turned into headwinds.

I have yet to read even one market bull who has considered the negative impact of the strengthening dollar on overseas profits. That is a fatal flaw in their argument for ever-higher profits and stocks.

Can the top 5% push corporate profits into the stratosphere?

Do trees grow to the sky? Corporate profits have risen at geometric rates. Does a recessionary global economy and a debt-crushed, declining-income 90% of households support the bullish claim that profits can soar to the moon? 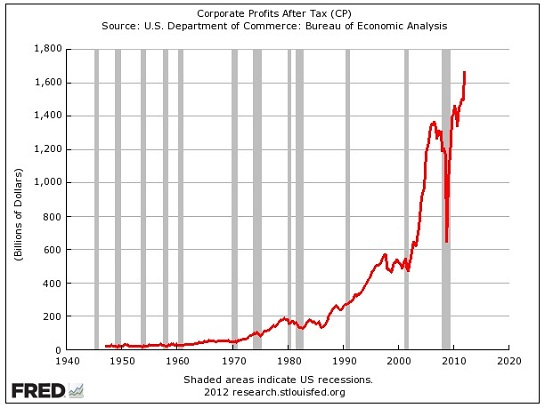 Here's a chart of the ECRI's Weekly Leading Index courtesy of dshort.com. I have marked it up to show the megaphone top pattern and the downtrend since 2007 of lower highs. This is unambiguously bearish. In effect, trillions of dollars in stimulus, bailouts, subsidies, giveaways and backstops have simply slowed the deterioration. Every time the economy threatened to sink into recession, another "save" was pulled out of the magic hat.

Once again the economy is on the edge of recession, only this time there are no more "saves" in the hat except QE3, and that can't be unleashed (and the sugar high won't last long) until 1) the market tanks and 2) the election is over.

When systems that have failed are not allowed to fail because of resistance by vested interests, the inevitable implosion is only delayed. Please consider this chart from Tony at Macro Story, who kindly shared this comparison chart of the S&P 500 (SPX) for 2011 and 2012. Tony counted a remarkably similar 16-point pattern in the two charts, and offered this commentary:

"First let me explain the basis for why the following may happen. The model analyzes market stress such as a selloff that was somehow averted. When such price action is averted, it is only done so temporarily. It does not eliminate the stress. And the more such events happen the greater the stress built into the system. For example, if you study the flash crash of 2010 or the July 2011 selloff, prior to that a number of opportunities for markets to correct were averted. For whatever reasons, the downside price action needed to cleanse the system was not allowed. The end result is the stress became too great and the downside movement was very explosive. (emphasis added by CHS)

The best example I can share with you is the detailed analog of the current market and that of 2011 over roughly the same time period. As a reminder there is more than just candlestick patterns but rather levels where price hits within the model. Those are levels used to identify such stress as referenced above."

Thank you, Tony. If the stresses that have been countered since December 2008 with endless rounds of interventions, threats/promises of QE, etc. can no longer be constrained, then the bottom could be much lower than most technicians and pundits expect.

Some analysts have been claiming that presidential election years are strongly bullish. Longtime correspondent B.C. separated election years in secular Bull markets from those in secular Bear markets, and reached a considerably more Bearish conclusion.

Bullish analysts consider 1,180 SPX a remote possibility. SPX 880 is not on their radar. Since nobody knows what will happen tomorrow, much less in October, all this is merely "food for thought." But confident Bulls might want to look ahead a year and study B.C.'s chart for the first year in a presidentail cycle.

Once again, if we separate secular Bull and Bear markets, the oft-touted Bullish trends for the election year and first year of the presidential cycle vanish.

If stocks start cascading in a landslide the enfeebled, failed Fed cannot stop, the sitting president may face a landslide as well.