The consequences of Euroland austerity are far-reaching and not euphoria-friendly.

The global markets seem to be trying to believe six impossible things before breakfast. The line is taken from Alice in Wonderland:

"Alice laughed: "There's no use trying," she said; "one can't believe impossible things."

"I daresay you haven't had much practice," said the Queen. "When I was younger, I always did it for half an hour a day. Why, sometimes I've believed as many as six impossible things before breakfast."

Longtime contributor Michael Goodfellow recommended this excellent analysis of global trade, the euro, China and the U.S.: Dont misread the trade implications of the euro crisis for China (Michael Pettis)

In pondering the points raised in this article, I settled on Six Impossible Things the global markets are trying to believe before breakfast:

1. That the austerity and resultant reductions in southern European trade deficits will have no consequences in Europe. As Pettis demonstrates, every country in the world cannot run a trade surplus or deficit; the two balance out. Thus as the stupendous current-account (trade) deficits of Greece, Spain, et al. shrink under their forced austerity, then someone else's trade surplus must shrink.

That would be the trade surpluses which have been propping up the domestic economies of Germany, The Netherlands, Sweden, etc.

3. Germany, China and other mercantilist, export-dependent economies will simply sell more to other nations running deficits to make up for the fall in southern Europe's imports. That wouldbe the U.S., the world's largest importer and the dumping ground for the past decade of the world's exports.

Take a look at this chart and notice that a significant percentage of the U.S. trade deficit is due to importing petroleum. Minus out the oil imports, and we see that the U.S. imports have fallen considerably. 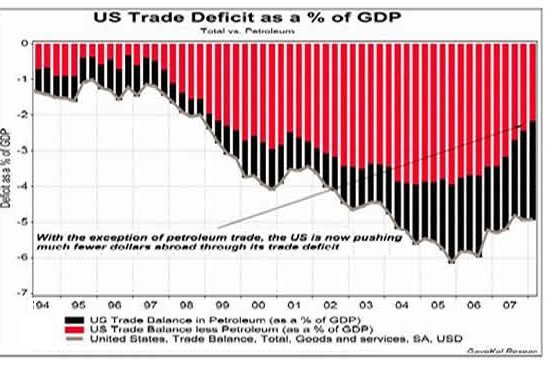 Not only that, but U.S. policy pursues the goal of expanding exports to reduce the trade deficit. Desperate exporters might find the global market for their goods has shrunk, which means their domestic economies are vulnerable to a slowdown in exports. Note how U.S. imports have fallen in the Great Recession: 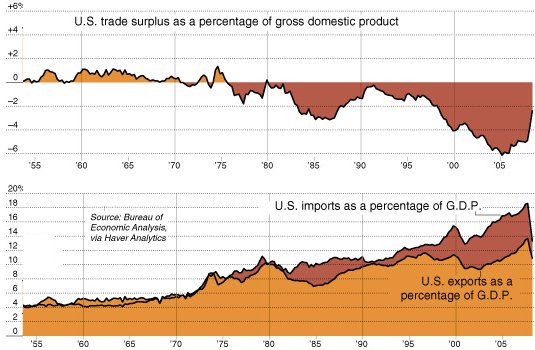 4. Tariffs will set everything right. Many voices are calling for stiff tariffs against all Chinese-made goods in the U.S.--conveniently overlooking, it seems, that most of the stuff labeled "made in China" comes from factories owned by U.S. European, Japanese or Taiwanese firms.

But never mind that; the real; issue is that the World Trade organization rules prohibit essentially arbitrary tariffs. Wanting to reduce one's trade deficit is not considered a valid reason to impose 28% tariffs.

5. the Eurozone will be able to borrow hundreds of billions of euros on the bond market without any consequences to global interest rates or risk premiums. Despite all the propaganda released every time some sucker buys Greek or Spanish bonds ("You see? The risk is gone, investors are snapping these up at low yields, Everything's fixed now"), it seems some bond auctions have almost failed, and the value of Greek bonds continues to decline.

So what happens to bond yields when the demand for cash exceeds the supply of suckers willing to buy bonds with low yields? Yields go up--not just for Greek and Spanish debt but globally as the competition mounts for cash.

6. China will continue to buy U.S. Treasuries, enabling low interest rates in the U.S. forever and ever. Not only have the Chinese central bankers made it clear they think $900 billion or so in T-bills is more than enough, as Pettis explains, their only hope of halting the slide of the euro against the dollar (and hence against the Chinese renminbi) is to start buying euros in quantity to put a floor under the euro.

Even China doesn't have large enough current account surpluses to fund the gargantuan debts being floated by the U.S. and the eurozone.

Bonus Impossibility: The U.S. dollar will implode and the euro will stabilize at 120 to the dollar. With austerity requiring not just laying off tens of thousands of government employees, selling off government assets and a mass reduction in lifestyle along with stiff tax increases, but a wholesale realignment of euro-style State Capitalism, what are the odds that southern European populations will take all these losses in stride?

What are the odds that the Germans will watch their exports plummet with equanimity and that they will gladly pay even higher taxes to bail out the Club Med economies even as their domestic economy falters along with exports?

Who will be the first to jump the euro ship--the Germans or the Greeks? There are powerful arguments for both to bail out. Once it comes down to self-preservation, it is difficult to see any nation sacrificing itself on the altar of the euro.

Yes, all currencies may well fall against gold, silver and oil, but within the basket of currencies, those betting on euro strength really are trying to believe the impossible not just before breakfast but even before the coffee has finished brewing.

But make no mistake  if southern European trade deficits decline, someone somewhere must bear the brunt of the corresponding adjustment. The only question is who?

The consequences will ripple out not just through current accounts but through foreign exchange rates, bond yields, and domestic economies and politics.