Teasing apart the various forces acting on the price of gold reveals the complex financial character of the yellow metal.

That gold is in a long-term uptrend is undeniable. But the price movements on the way up have been significant. The news is "gold hits a new high." (Never mind adjusting for inflation; that doesn't fit in the headline.)

Is now "a good time to buy"? Potential buyers of gold have a built-in self-interest in buying at troughs rather than peaks.

As a result, it would be beneficial to attempt to parse out the forces or cycles which lead to troughs in the decade-long uptrend.

As always, please read the HUGE GIANT BIG FAT DISCLAIMER below to refresh your awareness that nothing on this site is investment advice, it is only the freely offered meanderings of an amateur observer.

Is gold in semi-bubble territory, set for a dramatic decline, or is it ready to continue on to $1,350 and beyond this summer?

Let's start our investigation by noting that gold is a relatively small player on the global investment scene; the total value of tradable gold is estimated at $5 trillion.

Compare that with a global GDP of $58 trillion and a market value of publicly trade shares of around $60 trillion.

Unlike stocks and bonds, gold is intrinsically limited in quantity. It also has industrial/dental uses, and is considered a traditional store of value in the two most populous nations on Earth, India and China. In terms of investment strategy, Gold is widely viewed a "flight to safety" in times of volatility and as a hedge against inflation.

Despite its long-term uptrend, gold has suffered sharp swings in price in the past two years that defy simple explanations.

To wit: Gold suffered its sharpest recent decline right when the global financial meltdown peaked in late 2008, falling about 35% from its peak. That is a non-trivial decline.

Wait a minute. Wouldn't gold have surged in a "flight to safety" during the financial crisis? Why would it plummet 35% along with other much riskier assets?

I see four forces acting on the price of gold. Acting in opposition at times and in concert at other junctures, these forces make a mockery of any simple explanation of gold's wild price action. Hence my phrase "Trickster Gold."

Let's look at the four forces acting on gold and see if we can use them to make sense of recent price action: 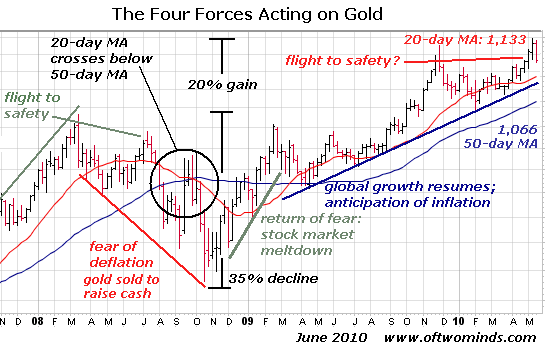 In early 2007, strong global growth drove up fears of inflation, giving gold a boost as a hedge against rising inflation. As the global financial system started looking vulnerable, gold slipped along with inflation fears.

When the global credit crisis began building in early 2008, gold rocketed as investors fled risky assets for the "safe haven" of gold.

Then, as fears of a contagion receded, so did gold's price from above $1,000 per ounce down to $750/ounce in early September 2008. We might also attribute some of this decline to a recognition that deflation might be the danger rather than inflation.

A few weeks later, Lehman Brothers collapsed, and the "flight to safety" drove gold almost $200/ounce higher in a matter of days.

But by October, gold had crashed to the $680/ounce level, a 35% decline from its peak in March.

What happened to the "flight to safety"? While speculation of central bank manipulation is an ever-present possibility in gold markets, investors desperate to raise cash to meet margin account and other debt requirements may have sold gold precisely because it had retained its value in the global meltdown of financial and real estate assets.

That gold tends to hold its value ironically makes it an attractive asset to be sold in times of need. Consider India, where gold and silver are traditionally favored as hedges against inflation. With food inflation running at 16% now in India, families hard-hit by sharply rising food costs may not be able to afford to hold a gold hedge permanently.

The same phenomenon may also be present in financial crises. When stocks plummet and margin calls must be met, then asset managers might be tempted to sell the assets which have held up the best--in some cases, that would be gold--to quickly raise cash to either make interest payments or reduce debt.

At this point it's worth recalling the relatively small size of gold in the universe of assets. In a world of unlimited leverage and debt, $1 trillion in debt is small percentage of total debt outstanding. But $1 trillion in gold is fully 20% of the entire tradable value of all gold.

Thus any dumping of gold to raise cash to pay off pressing debt that is pressingly due and payable would exert an outsized influence on the price of gold.

Anticipation of deflation was potentially another factor. Gold's value as a hedge declines somewhat in deflationary periods; U.S. Treasuries or high-quality corporate bonds paying some yield become more attractive when deflation is at work, at least to those funds and players who need some yield.

As global growth resumed in Spring 2009, then the "flight to safety" trade in gold gave way to the "hedge against inflation" trade, as traders anticipated resumed global growth and heavy government stimulus might stoke the fires of inflation. As confidence on global growth strengthened, gold gained about 20% from its previous high in March 2008.

When global stock markets dipped in November 2009, then gold responded in see-saw fashion by spiking up. Amidst the recent stock market turmoil, gold responded by hitting a new high--perhaps as a result of the re-emergence of the "flight to safety" trade.

All this suggests that gold's short-term price swings depend on the global financial situation. If deflation is once again foreseen as a risk, and cash must be raised quickly to pay down debt or make interest payments, then recent history suggests gold could swoon as it did in late 2008.

If global economic growth resumes, then gold's long history as a hedge against inflation suggests the current uptrend could continue unbroken until the next global financial panic occurs.

To assume new highs will be reached on a "flight to safety" ignores the lesson of 2008: gold is subject to losing a third of its value in short order if a liquidity crisis forces players to sell anything in their portfolio that still has value to raise desperately needed cash.


I would like to call your attention to Congressional Candidate (Virginia 6th District) Jeff Vankes Balanced Budget Proposal as a practical step forward in the quest for a sustainable economy.