Obama's "good cop" routine has masked the reality that his administration has followed the same policy paths in finance and geopolitics as "bad cop" George W. Bush.


I finally understand the fundamental analogy of American politics, and of course it's drawn from film/television: good cop, bad cop. You know the scenario: Bad Cop enters the room and recalcitrant suspect/perp gazes up in hostile, stony silence.

Bad Cop "softens up" the suspect/perp with a "we're going to kick derriere and take names later" speech and then moves on to hardnosed "persuasion:" It'll be a lot easier on you if you cooperate, tough guy, but if you want to play tough, then fine, play tough; we'll play tougher.

After a round or two of this, Bad Cop appears to lose control and is either restrained from assaulting the suspect/perp or goes ballistic in a spittle-flecked tirade a few inches from the suspect/perp's face which communicates this sobering message: "You think you're crazy? Well, I'm crazier."

The suspect/perp is delighted to find a reasonable person in this hellhole cell, and with a few additional reassurances from Good Cop, proceeds to spill his guts.

Boost American "boots on the ground" in Afghanistan? Ditto.

Give even more power to a hopelessly opaque, venal, destructive Federal Reserve? Ditto.

Foist off simulacrum reforms of the finance and banking sectors as "real reform"? Ditto.

Maintain the American presence in Iraq, regardless of announced "troop withdrawal deadlines"? Ditto.

Loudly proclaim programs to "save the American homeowner" which end up aiding a mere handful of the millions losing their homes? Ditto.

Announce bailout after bailout, all in the name of "saving jobs" even as it would have been cheaper to simply pay hundreds of thousands of people to stay home or go out and have a good time? How many jobs were saved by giving AIG $150 billion? Some of that money will flow into the gargantuan bonuses of Goldman Sachs employees, but that's also what happened when Bush and Paulson held the reins of power.

The number of jobs created or saved with that $150 billion is miniscule compared to what that money could have funded (say, 100 immense solar-power plants).

Back in April I speculated that perhaps Obama had a secret plan to discredit the investment banker cabal and thus undermine their vast political power and reach: Obama's Secret Plan (April 22, 2009)

Alas, like all hopes for genuine, fundamental reform via the political process, this now seems like a foolish bout of wishful thinking. With the "backstops," guarantees, loans and outright direct investments in the banking sinkhole now totalling $13 trillion (the entire GDP of the nation and 1/3 of its total net worth), there is no way Obama can extricate himself from this deep of a pit except to devalue the dollar, which will have horrific consequences far beyond the banking sinkhole.

Let's consider Iraq--the military/Empire misadventure Obama opposed in the election, an opposition which helped him win the presidency. Yes, a "deadline" of American withdrawal has been announced, but such a timeline was already in the works before Obama was sworn into office. Since U.S. casualties are down in Iraq, the conflict has slipped from the news entirely except for brief coverage of suicide bombs which kill scores of Iraqi civilians (lesser bombs and casualty numbers are simply "noise" that's ignored).

In other words, as far as the general American public is concerned, the war is already over. The only people who still care what goes on in Iraq are the people whose family members are still serving there in the U.S. Armed Forces and various subcontractors with lucrative construction or security contracts.

This seems to suit Obama and the Empire just fine. In fact, it's ideal for both: the American presence slips out to secured bases far from the media limelight and Iraqi civilians, fulfilling the strategic goal of the war from the start: regional dominance. 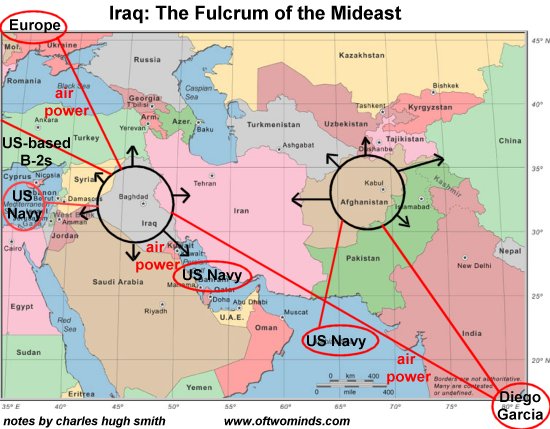 1. The strategic value of Iraq and Afghanistan is rather obvious. If you want to control or influence the mideast, then by all means take the center, Iraq; and if you want to extend your influence all the way to China, Pakistan, Russia and India, then take Afghanistan, too.

Even as someone who sees the war as a catastrophe I am awed by the sheer ambition of the war's planners and respectful of the strategic implications of how it plays out from here.

A cursory glance at the map offers a staggering array of strategic advantages to controlling or influencing Iraq and Afghanistan. Even to an amateur these pop off the map:

2. We know about the oil, but what else is in play strategically? It's about the oil, of course, but beyond that observation lies a wealth of other factors, such as denying that oil to others who you might want to influence. Just choke off the Straits of Hormuz and a world of leverage suddenly opens up.

Put another way: The U.S. never had to "win" the war to gain strategically; it only had to deprive Iran, Syria and Russia a cost-free sphere of influence/satrapy. It has accomplished that at, in terms of Empire, a rather low "cost." All the power-projection assets were already in place: naval strike forces, bases in Europe and Diego Garcia, etc.

Even more ironically, the oil-thirsty major power with the most to lose from U.S. domination of the region--China--ended up funding the war's financial costs via lending the U.S. $1.5 trillion at stupendously low rates of interest. That, ladies and gentlemen, is Empire writ large.

Knowledgeable correspondent B.C. and I have been discussing Iraq and China in some depth recently. As B.C. noted in a recent email:

China is about 30-50 years late to the auto-oil growth model.

Extrapolating China's ~6-10% trend growth of demand for oil, given the presumed peak production (supply) of 85-87M bbl/day, and assuming an indefinite production plateau (realistic . . .?), China's demand will reach that of the US by '20-'21 (that of the US and Eurozone by '29-'30), and China will consume the entire world's supply of oil by the mid- to late '30s.

Chinese May oil consumption up 6% year over year

Given the choices of alternatives to cheap oil the world has today, there is simply not enough time between now and the mid- to late '10s to implement viable alternatives to allow current rates of remaining relatively cheap oil consumption and GDP growth for the West and China-Asia to continue, albeit now with the world GDP contracting.

Needless to say, the US and the West cannot allow China's growth and consumption to approach anywhere near what we in the West consume for a host of obvious reasons, thus China faces an imminent day of reckoning at which point its growth trajectory is quite likely to decelerate abruptly and "unexpectedly", and thereafter crash violently.

It is within the context of the emerging global resource constraints and a no-growth trajectory that a breakdown of trade and diplomatic relations and resource wars often occur. Iran, Iraq, Syria-Israel-Palestine, Pakistan, Mexico, Georgia, North Korea, and Afghanistan are all areas of increasing risk of instability or chaos, suggesting that the risk to "globalization", i.e., Anglo-American empire, is rising with each passing day.

Can the Anglo-American imperial military successfully fight wars on multiple fronts? The Middle East, Central Asia, AND Asia-Pacific? Napoleon and Hitler failed to successfully fight two-front wars. And the Romans eventually succumbed to rising costs and diminishing returns to funding a multi-decade, multi-front defense of empire.

B.C. also made these observations on the U.S. strategic interests in Iraq:

The invasion of Iraq was part of a larger strategy to (1) secure the Mideast oil fields and shipping lanes; (2) encircle and contain Iran; and (3) a forward front against any designs by Russia and China for future moves against Central Asian and Mideast oil supplies.

Recall Hitler's aim in the 1930s to invade, occupy, and colonize Russia, Ukraine, and Belarus as a resource colony of the 1,000-year Reich. Well, Germany accounts for 25% of the Eurozone economy and a disproportionate share of the area's exports.

But the Eurozone is becoming increasingly dependent upon Russia for natural gas supplies, including at least 30% of Russia's exports going to the Eurozone. With Russia's population declining, the country nearing the peak production plateau, and growth likely to be slow or worse, the Eurozone's energy security could someday be at risk.

Thank you, B.C., for these insightful comments and links.

As a result of these energy and geopolitical realities, China has been forced to seek long-term oil contracts with Venezuela (also a major exporter to the U.S., and within the U.S. sphere of military influence established by the Madison Doctrine) and various unstable kleptocracies in Africa--regimes which may prove to be not the most reliable allies or suppliers.

Imagine for a moment if the roles were reversed: The U.S. loans China $1.5 trillion in low-yield loans, money which China used to establish military influence over the heart of the Mideast oil region, forcing the U.S. to seek oil from marginal suppliers a half a world away and from unsavory, profoundly unstable kleptocracies.

No one can say how long any oil-dependent Empire can last, but we can safely assume that the Empire which controls access to most of the world's oil will outlast all others--at least until the oil being exported declines precipitously.

Thank you, Cudick A. ($50), for your astonishingly generous contributions to this site. I am greatly honored by your support and readership.