The California economy and thus its state government are imploding like a star in its death throes. California's fiscal crisis will destroy the fantasy that the U.S. economy is "recovering" and "stocks are a buy."

That the state of California is a fiscal mess is not news, but the full extent of its implosion has been masked by a complacent and complicit media fearful of telling the truth.

Buried in this bland "press-release passing for journalism" story is the ugly reality: Democratic leaders say they're close to budget deal.

The Democrats' plan includes $1.9 billion in new taxes to help close the $24.3 billion deficit. The Democrats' proposal - which includes $11.4 billion in actual cuts to state spending, according to Democrats - is not nearly enough to solve the crisis. The rest of the proposal closes the gap with revenue accelerations, fund shifts and fees.

By comparison, the governor's plan included $15 billion in cuts to state spending. He also proposed billions in fees and one-time solutions, including a $48 surcharge on all residential and commercial property insurance. In addition, the governor wanted to borrow nearly $2 billion from local municipalities, which the Democrats rejected.

Talk about Tweedledum and Tweedledee parties: the only difference between the two parties is the degree of their reliance on accounting trickery, new taxes and fees and what is essentially fraudulent shifting of revenues and expenses to mask the shortfall.

As if that transparent reliance on slight-of-hand wasn't enough--note the Democrats' plan cuts $11 billion, raises $2 billion is taxes, and then buries the other $12 billion through fraudulent accounting, while the Repubs are hiding "only" $8 billion via tricks-- take a look at this chart and read the state Controller's report. Then you'll understand that the state's "leaders" are chasing a ball downhill: by the time they finish crafting a phony budget which satisfies the state unions and their other special-interest overlords, the deficit will have grown from $24.3 billion to $25 billion--on its way to $30 billion. 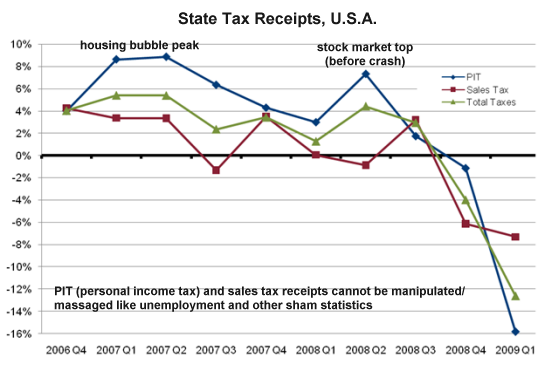 The chart is from a report (submitted by correspondent Dan K.) which has spread throughout the blogosphere (but not the MSM): April Is a Cruel Month: Personal Income Tax Revenues Portend Deepening Trouble for Many States (Nelson A. Rockefeller Institute of Government)

Here is a report from the California Controller: Statement of General Fund Cash Receipts and Disbursements April 2009

Anyone who thinks the downtrend in tax receipts will suddenly reverse course should step away from the flickering screen of fantasy and re-enter reality. Personal income taxes bring in almost half of all California tax revenues; us plebian residents pay modest income taxes while high-income folks pay about 10%. Let's consider what generated all the big income which generated all the big tax revenues:

But wait, there's more: structural changes are gutting Hollywood, the music industry, tourism and the vaunted tech industry--the last props left now that the FIRE economy is reduced to cinders.

Meanwhile, as those paying huge taxes go broke, downsize or simply pack up and leave, the Democratic "leadership" refuses to consider even a 5% pay cut for the state work force. Question for both parties' "leaders": where do you think you're going to find $8-$12 billion to fill the shortfall you're masking with tricks? Do you really think the FIRE (finance, real estate, insurance) economy will roar back from the ashes and generate $15 billion in new tax revenue in 2010?

May I introduce a strange new concept, reality, to your calculations? Count on another $10 billion shortfall in 2010, not a $10 billion windfall.

The transparency of their desperation to cling to the status quo is breathtaking: do they really expect the bond market to accept that a $25 billion deficit has been "resolved" with $11 billion in actual expense reductions, $2 billion in new taxes and $12 billion in accounting tricks?

Who is willing to bet money (i.e. give California cash) that the state will not add to the remaining $12 billion deficit for this fiscal year with another $10 billion next year, and so on until the state finally defaults?

Apparently not the Obama administration. As beholden as the Obama administration is to the unions and Democrats of California, they can discern the end-state of bailing out California: any bailout of the Golden State would be followed by 49 other requests for bailouts (as if the $787 billion "stimulus" package wasn't already a bailout of the states.)

Even more dispiriting for the "leaders" of California, the realists in the Obama White House recognize that bailing out California in 2009 will require bailing it out in 2010, 2011, 2012, etc. A state which refuses to deal with a $25 billion deficit has no track record to suggest it will tear itself away from fantasy and political cowardice in 2010 or indeed, any year.

The bond market might just decide enough is enough and refuse to lend money to California to paper over its $8-$12 billion deficit for 2009. Then the state will have no choice but to default on some of its obligations. The clock is running, as the state controller has said that California will run out of cash within 50 days.

If you look at the trendline in the chart above, that appears to be an overly optimistic assessment. I would hazard a guess of 30 days, max, before implosion.

What do you reckon will happen to the "green shoots" stock market rally when California defaults on its obligations? Even with all the manipulation and propaganda of Wall Sreet and the MSM in full play, I doubt the rally will be able to shirk off the default of California. Maybe the "players" will realize the jig is up, and their rush to the exits has a name: crash.


A few classics in case you missed them:

The Future of Life E.O. Wilson

Beyond Oil: The View from Hubbert's Peak

The End of Oil: On the Edge of a Perilous New World

Twilight in the Desert: The Coming Saudi Oil Shock and the World Economy

Our Stolen Future: How We Are Threatening Our Fertility, Intelligence and Survival

On the demographic time bomb about to explode:

Fewer: How the New Demography of Depopulation Will Shape Our Future

On collapse of advanced civilization:

A realistic appraisal of alternative energy:

Our previous lists of hot reading and viewing can be found at Books and Films.

Thank you, Jim S. ($20), for your most generous (multiple) contribution to this site. I am greatly honored by your support and readership.