The rot in China's economy is deeper than inflation and malinvestment. 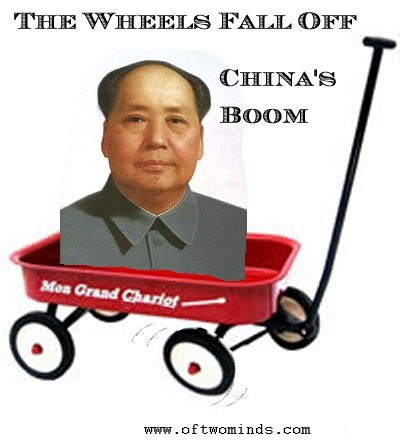 Despite their many differences, the economies of China and the U.S. share a number of key traits: both are corrupt, rigged, crony-Capitalist, rely on phony statistics and propaganda and operate with two sets of rules: one for the Elites, and another for the masses.

Given these similarities, it's no wonder that the wheels are falling off both economies.

There are some key differences, of course, which will make the crashing of China's boom all the harder. China's leadership likes to do things in a big way, and so its campaign of "extend and pretend" over the past three years has been unprecedented.

This isn't just the consequence of a Command Economy overseen by a Central State; the "extend and pretend" boom was fueled by stupendous borrowing by local governments and private enterprise as well.

This flood of money has severely distorted China's economy, yet the imbalances are now normalized. The system and players have now become dependent on this level of stimulus, so withdrawing the distortions would have negative consequences. Yet allowing the flood of investment to continue will unleash higher inflation, which is already triggering social unrest: Chinese Street Vendor Dispute Expands into Violent Melee.

Thus China's leadership faces the same impossible conundrum as Bernanke has in the U.S.: Your Pick, Ben, But One Goes Off the Cliff (April 22, 2011).

When a system become this precarious and imbalanced, it can best be modeled by stick/slip destabilization: blaming the last grain of sand that destabilizes the entire pile for the collapse is to ignore the real cause: the entire system is unstable.

Here are a few factors which are widely misunderstood or discounted by the mainstream financial media.

1. Over-reliance on property speculation for profits. What if 60% of IBM's annual profits were earned from real estate speculation? Would this strike you as a sound company and economy? Yet that is the case for Lenovo in China: The Boom And Bust Of China's Rise (Zero Hedge):

Recently Liu Chuanzhi, the Chairman of Lenovo and the iconic figure of Chinese manufacturing, faced a serious dilemma while asked why of Lenovo Groups profit in 2009 60% came from asset investment and only 40% came from manufacturing. He said when the typhoons come, even a pig can fly in the sky. Everybody is profiteering from this. Why cant we? The typhoons refers to the property frenzy and the easy ways to make money.

Roubini said investment was already 50 percent of gross domestic product. Sixty years of data had shown that over- investment led to hard landings, he said, citing the Soviet Union in the 1960s and 70s, and East Asia before the 1997 financial crisis.

Add one part unlimited ability to borrow to one part crony capitalism and one part command economy and you have a toxic cocktail of incentives to build things which make little sense financially or functionally.

China's second and third-tier cities are littered with sprawling (and empty) sports facilities, municipal complexes, university campuses, etc. which have been built for two reasons, and two reasons only: so local governments can meet their "growth targets" and local officials and their cronies can reap gargantuan profits.

The photos of empty cities are only the tip of the iceberg in terms of housing:

In the absence of official statistics, Caijing cites and estimate that an astonishing 50-70% of new apartments sold between 2007-2010 have been purchased by speculators and are now standing empty.

Two factors further distort the West's understanding of Chinese real estate. The markets in Beijing and Shanghai are different from those in second and third tier cities; talking about Beijing real estate is like talking about Manhattan property: extrapolations based on thin slices of Elite real estate are bound to be wrong.

Many know-nothing Western pundits repeat the tropism that China's rural population will soon fill up all those empty towers and cities. What they don't understand is that perhaps 10% of China's population can afford to buy a home, even in third-tier cities nobody in the West has even heard of. Most workers in China make $200 a month or less. Buying a condo for $100,000 is out of the question.

3. The Central Government is a domestic paper tiger. The West marvels at the seemingly powerful grip of the Communist Party and the central government's functionaries on the nation, but this control is akin to a radioactive substance: it decays very quickly with time and distance from Beijing.

When it comes to social compliance issues such as ordering people to wear masks in public and closing down cities threatened with epidemics, the central government's authority functions well.

But when it comes to actually controlling local government, Beijing's level of control is near-zero. This can only be understood by having sources within local government; talking to Chinese yuppies in fancy hotel bars and Beijing officials will never get you close to the way things actually work in China: the real action is all at the local government level.

4. Local governments have an impossible dual mandate: growth at any cost, to maintain employment and social stability, but rein in the financial sources (debt) that fund the quick-and-easy "growth": real estate development and grandiose infrustructure projects.

There is no way out of this double-bind. The Central Government recently took $400 billion of bad debt off local government books, but this is simply more "extend and pretend": the local governments have no other way to meet aggressive growth targets except more malinvestment funded by borrowed money.

5. Local government is hopelessly, intrinsically, deeply corrupt. Authorities are constantly claiming to be strengthening the rule of law, but "rule of law" doesn't mean the same thing as in does in the U.S. and Europe: ( Social Signs Point China to The Rule of Law.

"A focus on stability without the rule of law can turn social management efforts into ingredients for social control and repression. And that can lead to vicious cycles of injustice."

Scrape away the Communist rhetoric and social engineering-speak, and China is culturally still Confucian, meaning that authority trumps any set of rules. The judiciary and courts in China operate only until they become inconvenient to a ruling Elite. At that point the ruling is overturned, the case is buried or dismissed, etc.

As noted above, the rubber hits the road in China not in Central Government edicts but in the opaque machinations of local government, and local government makes up the rules as it goes along, placating various crony Elites and Powers That Be at any given moment.

If anyone thinks the citizenry isn't angry about systemic corruption, then they've been spending way too much time with Chinese yuppies in fancy bars and dissembling officials.

6. Much of the "growth" and profits have come from ruthless exploitation and predation. The civil unrest that is igniting all over China is partly a result of continual, grinding oppression and predation by the local Elites. Thugs push around poor vendors--is this your idea of "rule of law"? How about pushing peasants off their land for luxury condo developments?

This sort of exploitation by local authorities and their cronies draws a ho-hum response from the Western media; corruption and predation has been normalized--unless you're the one being pushed off your land and given a pittance in compensation.

7. Income disparity is extreme in China. With much ado, high-speed train lines have been constructed at break-neck speed. But as our young Chinese friends complain, the ticket prices are out of reach of the average worker: Bullet train ticket prices set:

It's nice to have all this fancy infrastructure, but at best 10% of the populace can afford to use it.

8. China excels at building new things rapidly, but fails at maintenance. For the past 30 years, the mindset has been: tear it down and build a replacement. Buildings that are barely 20 years old are routinely torn down in China and replaced with much grander structures.

Unfortunately, this mindset doesn't support the sort of painstaking maintenance required to keep high-speed trains operating over the long-term. In Japan, crews go out daily to inspect the Shinkansen bullet train rail lines, hundreds of kilometers of track.

There is precious little evidence that China has the cultural and institutional infrastructure to maintain the hudnreds of kilometers of high-speed lines that have been built. It all works well when new, but how about in five and ten years?

9. The dilution of truth and fact have poisoned the culture. The same can be said of the U.S., of course. China: Truth, Rumors, and a Basket of Fruit:

But recognizing the true source of the illness-the consistent, deliberate misuse of truth for political purposes-is out of the question, for the moment. So authorities will continue racing around in an attempt to shore up the existing system, in which lies will now be accepted as truth and truth be defamed as a lie.

"The absolute refusal to believe the truth of anything, no matter how well it may be established. In other words, the result of a consistent and total substitution of lies for factual truth is not that the lies will now be accepted as truth and truth be defamed as a lie, but that the sense by which we take our bearings in the real worldand the category of truth versus falsehood is among the mental means to this endis being destroyed."

10. The wealthy Elites are not committed to staying in China to work out a more equitable and sustainable future.

12. The strange brew of crony Capitalism and Command Economy creates a market nobody believes in. The distrust in central management and profits based on the current 'extend and pretend" borrowing binge is visible in the Shanghai stock market: 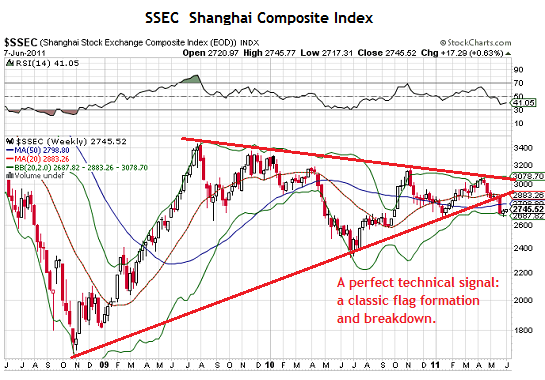 Reforming the Status Quo would require reining in local government and remaking it. There are no mechanisms to do so. That is China's problem in a nutshell, and why the wheels are falling off the "extend and pretend" boom.