The global economy is undeniably sliding into an ever-deepening recession. When will the stock market reflect economic reality, and when will it finally hit bottom?

If we pursue the line of inquiry established by Chris Martenson’s recent call to Buckle Up--Market Breakdown in Progress, we come to these basic questions: when will the market reflect the fundamental weakness of the global economy, and when will the market finally hit bottom?

First, we have to stipulate that the correlation between the real economy and the stock market is tenuous at times. According to the National Bureau of Economic Research (NBER), the widely recognized designator of recessions, the most recent recession began in December 2007 and ended in June 2009. Fully six months into the downturn (June 2008), the S&P 500 stock market index was still resiliently hovering around 1,400. The market did not break down until September, 2009, the tenth month of recession.

A mere three months after the market bottomed in March 2009, the recession ended (as determined by the NBER).

Clearly, the correlation between market action and the underlying economy is weak.  While many would declare the stock market is a “lagging indicator” of recession, even that may be overstating the connection. If we have learned anything in the past three years, it’s that weakening the dollar to foster the illusion of rising corporate profits, central bank monetary easing (QE) and central state borrow-and-spend stimulus can goose the market higher even as the underlying economy remains weak or recessionary.

Properly inflated with cheap liquidity, the stock market could continue rising even as the real economy (as measured not just by profits but by employment, household earnings and tax revenues) sags into recession.

Indeed, some have argued that the emergence from recession in June 2009 was largely illusory, the consequence of counting debt-funded spending as part of GDP.  (By this thinking, all we need to do to avoid recession is borrow and spend $10 trillion a year forever. That this course is artificial and unsustainable doesn’t enter into the calculations.)

If recessions were defined by real household incomes (i.e. adjusted for increases in the consumer price index), then the real economy is clearly still recessionary: household incomes slipped 3.2% in the December 2007 - June 2009 recession, and then fell another 6.7% in the two years from June 2009 to June 2011. This drop in inflation-adjusted income is almost 10% (9.8%), a staggering decline in a supposed “recovery.”

The point here is that the real economy could slip further downhill while monetary/fiscal “juice” keeps the stock market buoyant.

Another line of thought suggests that Global Corporate America has effectively decoupled from the American economy: corporate profits could continue rising, powering the stock market higher, even as most of America stumbles along in declining-income recession.

The conventional thinking, however, is that eventually the stock market will have to reflect economic reality, both domestically and globally, regardless of how much juice the Fed injects into the market.

That possibility becomes intriguing when we consider the Economic Cycle Research Institute’s (ECRI) call on September 30, 2011 that the U.S. was entering another recession.  The ECRI reiterated their position in March of 2012. The ECRI argues that the U.S. is entering an era of more frequent recessions as a result of 1) declining trend of economic growth and 2) increased cyclical volatility.

Though the mainstream financial media has treated the ECRI call as an outlier, this following chart (courtesy of frequent contributor B.C.) suggests the call may well be as prescient as ECRI asserts: 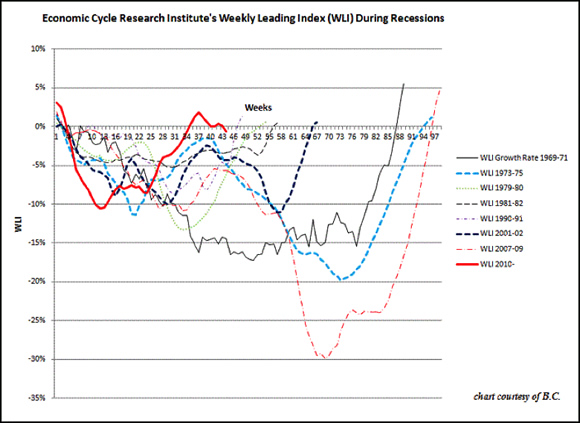 This chart displays the current post-recession Weekly Leading Index (WLI)--the ECRI’s proprietary measure of economic activity—with seven other postwar recessions, all plotted from the start of each recession. This enables us to examine the history of each recession from an “apples to apples” time perspective.

While each recession occurs in a unique set of circumstances, it is nonetheless striking that the current recession (WLI 2010, in solid red) tracks the sharp 1973-75 downturn, the 2001-02 “soft patch” and the 2007-09 recession rather closely in time if not in amplitude.

If history offers scenarios rather than predictions, it is interesting to note that if the current downturn follows the timeline of the relatively modest 2001-02 recession, the ultimate bottom lies out another 15 weeks.

If the present weakness tracks 1973-75, the bottom might be roughly 30 weeks ahead, while the 2007-09 recession offers a pattern that suggests the final low in the WLI might be reached about 20 weeks out.

The next chart displays the annual change in the WLI over several recessions. Since the present so evidently tracks the three recessions noted above, these downturns are the ones displayed: 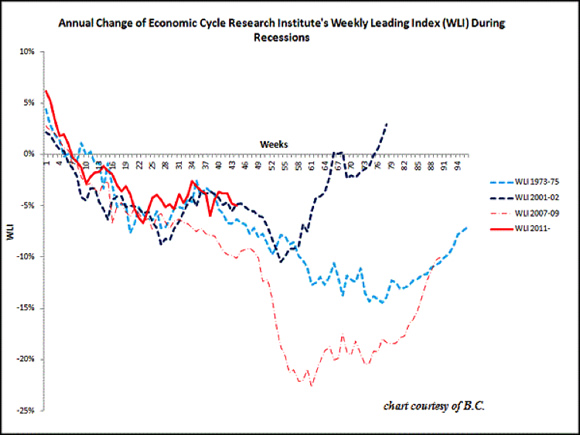 Once again, we see that the final troughs in previous recessions are still ahead by between 10 and 30 weeks.

The ECRI famously reports that they have never missed identifying a recession nor made a false positive (i.e. called 10 of the last five recessions). While it is certainly possible to question their reports or challenge the validity of the WLI as a useful indicator, their record is nonetheless impressive and should not be dismissed as an outlier.

The substance of these charts is clear: the U.S. economy is rolling over into another recession, and the bottom of that recession lies 10 to 30 weeks in the future.

What About the Stock Market?

As previously noted, the stock market’s tops and troughs do not correlate closely with the peaks and valleys of the underlying economy, as depicted on the above charts by the WLI.

Since the closest modern analog we have to a deflationary, deleveraging economy supported by massive central bank and central government intervention is Japan between 1989 and the present, let’s turn to B.C.’s chart of the Nikkei stock index between 1985 and 2003 overlaid with the S&P 500 (SPX) U.S. stock index starting from 1995 to the present.

To make the comparison “apples to apples,” the indices have both been plotted as a percentage of their highs, and each index has been adjusted against the trade-weighted currency (yen and dollar). To insure that currency fluctuations haven’t skewed our understanding of the index’s history, the Nikkei has been plotted both adjusted to the yen (red line) and to the dollar (blue line). 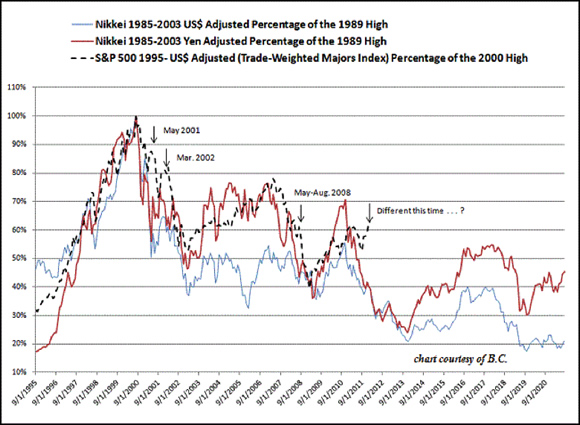 Plotted in this fashion, we see that the two indices, though based in different economies, have traced uncannily similar histories from their respective peaks.

We can see the sharp recoveries in the SPX in 2010 and 2011 when the Federal Reserve responded to market declines with massive quantitative easing (QE) programs.

Will the Fed continue to support the U.S. market with QE programs every time it sags? Will QE always work as well as it did in 2010 and 2011? If the history of the deflationary-era Nikkei is any guide (and we should recall that Japan’s central bank has provided unprecedented monetary easing while the central government has borrowed and spent unprecedented sums on fiscal stimulus), the bottom could be a year away.

In Part II: Predicting the 'When?' & 'How Far?' of the Next Market Decline, we will explore in-depth the technical indicators of both the U.S. and global markets that support the probability that a lot of downward motion lies ahead before we see the ultimate bottom in both the economy and the stock market.

This article was originally published on Peak Prosperity (formerly ChrisMartenson.com) where I am a contributing writer.

GARDEN SEED SPECIAL--10% OFF ALL EVERLASTING SEEDS--all seeds are organic.

Here is a snapshot of Everlasting Seeds' zucchini coming up in my little urban garden a week ago. This wonderful variety produces all the way into autumn. (ES-seed beets are visible in the foreground.) 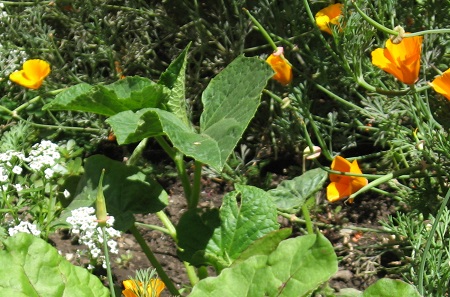 My gardening style aims at maximizing opportunities for pollinators and birds, so I let California poppy and alyssum volunteers flower alongside vegetables, and I let plants that produce abundant seeds for birds (chard and kale) go to seed. As a result, our little garden is always busy with pollinator insects and birds. It is a delight to simply watch Nature at work.

So for goodness sake, if you don't have even a single veggie planted yet, order some Everlasting Seeds today and get planting. The rewards are immense.