The "head-fake" decline in oil prices have decimated the budgets and geopolitical dreams of Venezuela, Iran and Russia. Who might gain if oil prices decline even further? 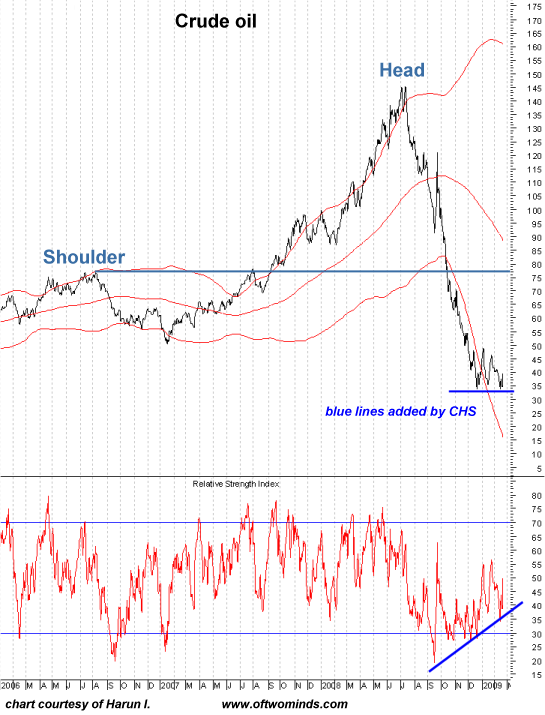 In the first, we see oil has indeed plummeted in a "head-fake" of temporary surplus. How long the head-fake lasts depends more on how much production is lost due to depletion, underinvestment and reluctant cuts than how quickly demand rises; for with a deep, prolonged global recession just sinking its fangs into the global economy, there is little evidence to support the notion that demand will recover quickly.

In the second chart, we see how price (in dollars) has fallen back to a trading range between $35-$45/barrel. Previous gluts/demand drops in 1986 and 1998 took the price of oil down to the $12/barrel range. Is that possible in a world which is already experiencing peak production?

Before answering, let's consider who has the capacity to flood an already glutted market and survive the final collapse of price. Saudi Arabia, Kuwait, the Gulf Oil states and Iraq come to mind: the first three due to their low production costs and reserves of cash, and Iraq because it can always count on the U.S. to provide whatever funds are needed to get through a rough patch of low oil prices.

And now let's tote up who will very likely not survive a further downleg in oil prices: Venezuela, Iran, Russia, and perhaps Nigeria and the West African oil exporters. By most published accounts, Iran and Venezuela require oil prices to stabilize around $80/barrel to fund their various welfare states and geopolitical ambitions (nuclear and otherwise). If oil falls to $20/barrel or lower and stays there, then their welfare states and costly geopolitical plans both implode.

For its part, Russia has already burned through several hundred billion of its once-impressive reserves of foreign currency reserves in a vain attempt to support the ruble. Very little has been heard recently about Russia's grand geopolitical ambitions and "alternatives to a unipolar world," etc. etc. because they rode in on a wave of high oil revenues.

If that wasn't bad enough news for Iran, Russia, and Venezuela, then let's consider a chart of the "fallen, heading to zero" U.S. dollar:

Much to most commentators' surprise, the dollar has staged an impressive rally. Yes, it's a fiat currency, etc., but nonetheless as chartists we have to be alive to the possibility that for whatever reasons might be in play, the dollar appears to be forming a reverse head and shoulders pattern which would then suggest a near-term drop to about 80, followed by a sustained run perhaps all the way back up to 120.

Speaking of head and shoulder formations, oil itself looks like it may be tracing out a huge head and shoulders. If so, we can expect oil to shoot up shortly to the $80/barrel range, forming the right shoulder, at which point a second downleg (as the global Depression worsens despite all the fiscal stimulus) could take it all the way down for a re-test of the $12 low in 1999.

Yes, this is a contrarian view. Well, maybe the dollar will tank to zero in the near future, but with the euro under pressure and talk of dismantling the EU suddenly appearing in The Economist, and the Asian exporters in a severe Depression, it may well turn out the dollar is looking pretty sound in comparison to all the other currencies. Even the mighty Swiss franc is exposed to all sorts of nastiness in Eastern Europe, and the draining of tax scofflaws' accounts is also a blow.

So why would Saudi Arabia, Kuwait and the Gulf Oil states launch a quiet assault on oil prices? Take another look at the map above. Note the long border Saudi Arabia shares with Iraq, and then note the proximity of Saudi Arabia to Iran.

Now consider what's at stake in Iraq for the Saudis: would they prefer a peaceful state with the minority Sunnis sharing power (however uneasily) with the Kurds and Shi'ites, or would they prefer an ascendent Iran dominating a satrapy Shi'ite state in Iraq?

Now I am not an expert in the mideast or Islam, but it's not exactly a secret that Iran's mullahs hoped to establish their Shi'ite nation as the leader of the global Muslim community of nations. To the conservative Saudi protectors of the Sunni faith and the holy city of Mecca, these ambitions of the Shi'ite Iranians are not exactly welcome.

In the Christian world, the closest analogy might be the 100-year war in Europe in which being Protestant or Catholic in the wrong place at the wrong time would have cost you your life.

Expansionist Russia is not exactly on the Gulf oil exporters' list of favorite friends, as Russia has supported Saddam, the Syrians and a host of other thorns/potential enemies of the Saudis.

As for Venezuela, the financial implosion of the Chavez regime will simply be a lagniappe.

Why would the Saudis do the U.S. a favor by essentially eviscerating the regimes of Russia, Iran and Venezuela? Here's the point: they wouldn't be doing it for the U.S., they'd be doing it for themselves and the Sunni world. The Saudis most pressing geopolitical goal is eliminating the threat of Iran's quest for dominance of the Muslim world and the central mideast. To the extent that Russia has been delighted to support the Iranians, then in the Saudi view they also need to be crippled/impoverished as quickly and completely as possible.

The Saudis are certainly grateful that the U.S. helpfully removed Saddam from power and acted to create a buffer state between Iran and the Sunni states. They must also be secretly delighted to see "democracy" and a free press slipping like a colorless dangerous ether across the Iraqi borders to Syria and Iran; who wouldn't be delighted to have the sole superpower sitting between oneself and an implacable, ancient and unpredictable enemy?

Based on all this, I expect oil to rebound this summer (for whatever stated reasons) to the $80/barrel level or so, concurrent with a sharp Bear Market rally that blows the doors off all the Bears' hotrods. Then, as the euphoria that everything is on the mend takes hold, the markets will reverse as the bad news resumes. Oil plummets in a new downleg (perhaps helped along by production increases from the Gulf) along with global equity markets.

Interest rates rise, bonds get walloped, and confounding everyone, the U.S. dollar continues its ascent. The oil head-fake is getting more interesting geopolitically by the hour.


NOTE: My apologies to all correspondents--February was unfortunately a "lost month" in which even a minimum presence was a challenge. In the past few days I have taken on a completely mad writing project, obsessive, consuming, an idiotic gamble like all the rest: an ebook entitled "Survival +." (Like "Canal +" only not a global media empire.)

"Survival +" was the theme of a series posted last June, and astute correspondent Unix Ronin suggested I turn it into a book. With a terrible compulsion I have taken on the project, with the goal of serializing it here starting on the first day of spring, March 20. Please excuse the silence of madness in the interval....