In a yin-yang unity, assets will continue deflating as the speculative credit bubble pops (yin) even as prices for FEW resources (food, energy, water) start to rise as demand exceeds supply (yang).

People seem drawn to the deflation-inflation duality, as if deflation precludes rising prices. Perhaps we should look to the Asian model of yin-yang unity for clarity.

Readers often ask me if I am in the deflationary or inflationary camp, and I have to answer "both and neither."

Recall that I have a degree in Comparative philosophy (combining studies of both Eastern and Western traditions), so the idea that two diametrically opposed forces, characterized as yin and yang in Chinese philosophy, could create the unity of the Universe seems common-sensical to me rather than "impossible."

So how could we experience deflation in assets and increases in prices for the FEW resources (food, energy, water) and services such as "healthcare" (a.k.a. sickcare), government and "higher" education? 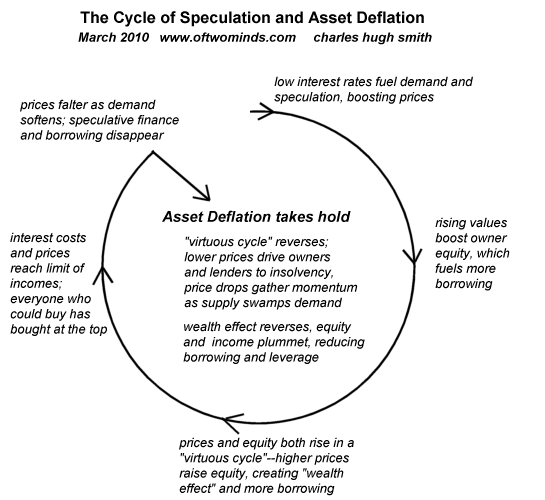 Even as assets deflate in value as collateral, income and credit contract, other factors will drive prices higher for non-discretionary goods and services.

Though global demand for materials such as copper and oil will decline as the global economy's bogus "recovery" fades, demand will eventually exceed supply as prices fall. Perhaps this sounds paradoxical, but as prices for raw materials decline, producers close mines and mills and put off investing in new production for two reasons: the absence of cheap credit and the unprofitability of bringing costly new sources online.

Recall that all the easily accessible stuff, be it copper, oil, gold or timber, has already been extracted/pillaged, so costs for new production going forward are intrinsically high.

This is how supply can decline even faster than demand, causing prices to rise even as asset deflation causes equity, capital and credit to contract.

Though massive global overcapacity of commodity goods such as electronics, furniture, clothing, etc. will put downward pressure on those prices as the global "recovery" melts into Global Depression, eventually even these prices may rise as factories close and rising energy costs increase manufacturing and shipping costs.

When oil hit $149/barrel, the cost of shipping goods from China to the U.S. outstripped the cost advantages, and news reports of firms moving production back to North America became common.

How could demand for essentials exceed supply on a global scale? In one word: malinvestment. On a global scale, there has been an unprecedented massive misallocation of capital into non-productive property assets such as empty cities, empty highrises, empty malls and empty McMansions, and stupendous diversion of potentially productive capital into State and private Elites via corporate welfare, bloated State expenses (unsustainable pension contributions and entitlements, inefficient brueaucracies staffed with overpaid technocrat Elites, etc.), transactional churn, Wall Street fraud and embezzlement, lawsuit/legal churn, etc.

Meanwhile, those services which are controlled by the State and the cartels which have captured the levers of governance are free to raise prices regardless of other conditions, as befits monopoly. "Healthcare" will continue rising in cost until the State finally admits its insolvency, the price of "higher" education will continue rising as governments everywhere are forced to push more of the costs onto students, and all governments will increase taxes in a desperate attempt to raise enough revenue to keep funding the pensions and perquisites of public Elites and those parasitic contractors who have but one "customer": the State.

With assets, income and tax revenues all in decline, the "weath effect" is stuck in reverse: borrowing and leverage are both crimped because there is no collateral or income to support them except for central governments, and their stupendous borrowing to fill the void of declining private credit will soon cause interest payments to crimp all other government expenditures.

Then there are the unfortunate, inescapable consequences of demographics: there are not enough workers to support the retirees entering the pipeline of entitlements and dependency, not in Europe, not in the U.S., not in Japan and not even in China.

The under-investment in the petroleum industry is global; stories abound about crumbling oil infrastructure in Iran, Venezuela, Mexico, etc. Theocracies, plutocracies and socialist governments alike have pumped their oil to support their Elites and placate their restive masses with welfare, and diverting that precious swag to investing in future production has been set aside or given lip-service.

Then there are conditions which humans may influence but which we cannot "fix", such as drought, depletion of aquifers, soil degradation, disappearance of glaciers which feed the major rivers of Asia, etc. etc. etc.

So that's how yin and yang form a unity: asset, income and credit contraction/deflation and rising prices due to large-scale supply/demand imbalances which traditional market and State forces cannot repair due to catastrophic mal-investments and the self-serving policies of public and private Power Elites.

For more on these large-scale forces which are at work beneath the propaganda and "nascent global recovery" headlines, please look at these books (if you haven't already read them):

The Future of Life

Fewer: How the New Demography of Depopulation Will Shape Our Future

The Third Chimpanzee: The Evolution and Future of the Human Animal

Beyond Oil: The View from Hubbert's Peak

The End of Oil: On the Edge of a Perilous New World

The Misbehavior of Markets

Dirt: The Erosion of Civilizations

Plows, Plagues, and Petroleum: How Humans Took Control of Climate

The Road to Serfdom

Age of Propaganda: The Everyday Use and Abuse of Persuasion

And the requisite shameless plug for my own book: Survival+: Structuring Prosperity for Yourself and the Nation