Total credit in the U.S. has surpassed household net worth. We are insolvent.

Total credit in the U.S. has surpassed household net worth. Without getting too fancy--even without counting the gazillion dollars of derivatives floating around, and all the off-balance accounting tricks of the banks, etc.--this is the definition of insolvency (debts exceed assets). 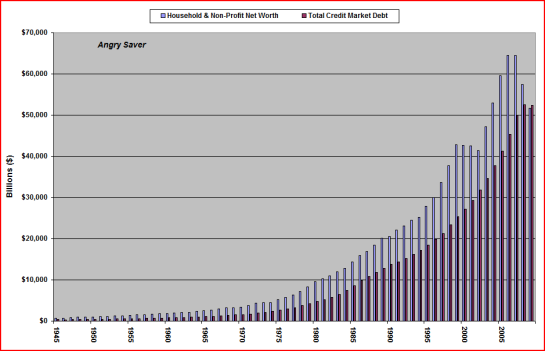 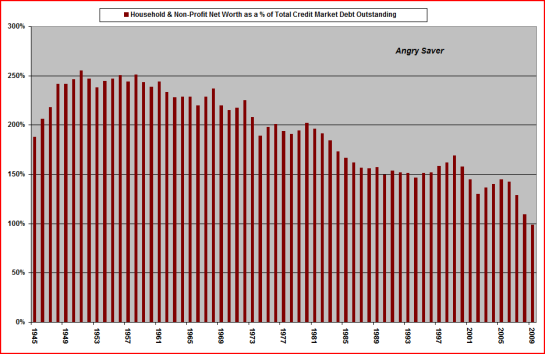 In the new eCONomy, "Extra Credit" isn't what it used to be! Maybe that's because "credit" is a warm and fuzzy name for DEBT!

With all the financial propaganda that's spewed about by the MSM, it's very easy to lose sight of the big picture. With that in mind, I wanted to share two of my charts with you.

The two charts compare two broad and distinct measures over time - total credit market debt and total household & non-profit net worth. I was trying to show the broadest debt/wealth picture possible and avoid comparisons to GDP. In general, I think the focus on GDP (basically spending) misses the point - the excessive level of debt in the system. Admittedly, it's an imperfect comparison based on imperfect measures, but very telling nonetheless (imho anyway).

Hopefully the following will help clarify the charts. All data is from the Fed's Flow of Funds tables.

Total credit market debt is a measure of ALL issued debt in the system including state, local and federal government debt, household debt (mortgage, consumer, etc.), non-financial business debt, financial debt and foreign debt. Social Security Trust funds debts of ~ $ 5 trillion are NOT included as they are not marketable and explicit debts of the U.S. Government.

Though not all-encompassing, Household and non-profit net worth is a broad and widely recognized measure of a nation's net wealth, including real estate, plant, equipment, stocks, bonds, etc. Wealth/resources such as national parks are not measured/included.

(Off topic - the debt creators and wealth extractors are already scheming to transform these types of shared and generally free wealth into rental streams. Beware! The last thing we need is for banksters and CONgress critters to transform existing and shared wealth into yet more unproductive debt. Grrrrrr!)

Our credit system is primarily based on collateral. So in a way, the charts show how much collateral has been monetized and is available for monetization at a given point in time. It's a dynamic system affected by many factors such as interest rates and credit policies.

As a point of reference, at the end of Q1, 2009, household net worth was only 92% of total debt and falling fast! Is it any wonder Bernanke started quantitatively (dis)easing and CONgress suspended mark to market accounting rules in March of 2009? If a nation's issued debt exceeds the total net-wealth of its citizens, exactly where is the collateral for more lending? Is it wise to preserve trillions in unproductive and fraudulently issued debt? Is it wise to allow a few members of the Fed to imbue so much un-earned wealth and power to the issuers and holders of said debt?

So much for being the wealthiest nation ever. Financial innovation? Please. A pyramid of ponzi debt.

In some circles, when the debt of a nation exceeds the wealth of the nation's people, it means insolvency. Yeah, yeah, I know, it's a check book system....we owe ourselves...financial debt is double counting. Bah! Hogwash!

For numerous reasons, our actual financial situation is much worse than shown in the charts. For one, assets values are still very rich on a historical basis, though low rates do offer support for current values. For another, the total debt numbers do NOT include the ~ $5 trillion in trust fund debts for social (in)security, etc. For yet another, tens of trillions of future medical and retirement liabilities are not included either.

I could go on and on about competitiveness, demographics, wealth distribution, etc., but there's no need.

As I see it, we don't just have a wealth distribution problem, we have TOO MUCH DEBT relative to our wealth.

Maybe it's just me, but I find it very troubling that our Government is willing to explicitly guarantee Wall St. bank debts and trillions in fraudulent Wall St. credit, but they won't explicitly guarantee entitlements that people have been paying taxes into for decades. Hank Paulson's recent op-ed in the WSJ claiming we had to get a handle on entitlements should be a wake up call for the majority.

When a Wall St. operative like Paulson wants to "address" entitlements, it likely means the majority are about to be short-changed. I'm not making a judgment about whether or not we can afford all of the promised entitlements. The point I am making is that the opinions of Paulson and all the other Wall Street bailout recipients should be viewed very critically.

Credit creation in a fiat system is a privilege. Used wisely, credit can increase output without inflation. Under the stewardship of venal bonus seeking bankers like Paulson, the credit creation privilege was used to extract wealth rather than create wealth. The Fed and their policy of inflation enabled Wall Street to skim trillions from Main Street.

Decades of reckless credit creation, bubbles and shams. Cui bono? Hank Paulson and Wall Street. Why would anyone value their opinions?

As always, comments and criticisms are welcomed.

Thank you, Angry Saver, for an excellent explanation of your sobering charts.

I know there are quibbles to be made about the balance sheet represented here. Some will no doubt claim that Muir Woods, the Hoover Dam, the Strategic Oil Reserve, etc., are worth trillions, but this is a pointless "feel-good" exercise because the Federal government is not selling Muir Woods, the Hoover Dam, and the Strategic Oil Reserve. (Local governments are however rapidly selling or leasing their parking meters, toll roads, etc., in a desperate attempt to raise enough money to fund their pension obligations for the next six months.)

The salient fact is that all public debt is a liability against taxpayers who have to pay interest on that debt. The only "real" thing about the trillions in public debt is the $450 billion the taxpayers spend on interest every year (and that's just Federal debt, not state and local government bonds debt).

Even if someone were to conjure up $20 trillion in government-owned assets ("get your world-class global Empire right here!"), as Angry Saver noted, you would also have to include the future liabilities of Social Security, Medicare/Medicaid, Veterans Administration benefits, etc., which are conservatively estimated at $60+ trillion.

And then there's the little matter of the $1.6 trillion Federal deficits piling up every year until Doomsday.

I think a very strong case can be made that the real estate, stock and bond assets of the U.S. are grossly overvalued, and once interest rates rise to more typical levels (as they most assuredly will) then an easy $10 trillion will be instantly shaved off the bloated valuations of all interest-rate-sensitive assets, which include real estate, stocks and bonds.

Given the absurd overvaluations currently hidden by "marked-to-fantasy" assets in bank balance sheets, I would guess we're actually $5 trillion in the hole right now, were all assets instantly marked to market.

It is tiresome indeed to hear the constant exhortations of the Status Quo and the MSM touting more debt as the solution to our "growth problem." Garsh, do you think the "growth problem" might be causally linked to the "debt problem"?

We're bankrupt, Baby. The travesty of a mockery of a sham can be extended for a time (at least until the November elections), but it cannot be extended indefinitely.