The widespread view of cities as parasitic consumers of rural food production overlooks the tremendous quantity of food which could be grown (or was once grown) in cities. 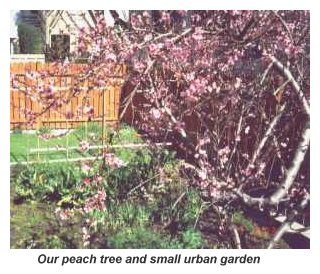 A common "Survivalist" scenario foresees cities imploding into heavily armed and utterly ruthless warring gangs within a few days of the supermarket shelves being emptied by hoarders. This view overlooks the long history of food production within cities, stretching back thousands of years, and the fact that pre-petroleum "modern" cities such as Paris supported populations in the millions with a mix of urban-grown food and horse-drawn (or human-powered) carts and river barges of food from nearby sources.

I cannot recall the source (my excuse is information overload from the huge array of sources I read) but it seems that about 1/3 of "modern" cities' food supplies were until rather recently provided by urban gardeners, small-scale egg/fowl production, etc.

For an overview of precisely how large, complex cities functioned in the pre-petroleum age (circa the foundation of modern capitalism, not be confused with the crony-cartel simulacrum we suffer from today), I recommend the three-volume masterwork by Fernand Braudel, Civilization & Capitalism, 15th to 18th Centuries:
The Structures of Everyday Life (Volume 1)
The Wheels of Commerce (Volume 2)
The Perspective of the World (Volume 3)

It is not inevitable that cities are hopelessly unsustainable, it is poor planning, ignorance and incompetence on the part of city agencies and the lackey politicos who are owned by real estate developers and other Protected Fiefdoms.

For a taste (pun intended) of just how productive a network of small urban gardens can be, please consider The Urban Homestead: Your Guide to Self-sufficient Living in the Heart of the City.

There are ample opportunities for creative approaches to growing more food in cities. Here is but one exploration in the pages of Scientific American (check out the November 2009 issue at your local library).

Granted this is a "high-tech" scenario, but the principles laid out--using gray water, solar arrays on buildings, greenhouses for year-round growing, etc.--are common-sense and potentially applicable to the abundant "crop" of abandoned buildings dotting the American urban landscape.

I can attest to the insane quantity of food that can be grown on a postage-stamp urban garden (our own, a 15' by 18' dirt patch around our peach tree) and the stupendous yields which can be gathered from urban orchards (we have two fruit trees, and they supply multiple households).

This is important: now is the time to order your seeds for the coming growing season, and please check out the catelog of this site's longtime supporter, Everlasting Seeds. Everlasting Seeds has supported oftwominds.com for well over a year, and it has a special offer for veterans of the Armed Forces--an acknowledgement which means a lot to the proprietor of Everlasting Seeds and to me.

I just ordered my seeds from Everlasting Seeds, and I think you'll enjoy looking at their offerings. If you're a small urban gardener like myself, then you might consider giving away some seeds to friends, as a way of encouraging them or aiding their own gardening efforts. Every order will be helping a small business doing good work for the betterment of the nation and its residents.

I have been growing vegetables since 1969 (in the red earth of Lanai, Hawaii, in my junior year of high school) and the satisfaction is not describable in the language of a consumerist/media-distorted culture such as the U.S.

Tommie over at one of my favorite blogs, Freedom Guerrilla "gets it": growing even one tomato plant in a pot is a revelation. Is there any wonder that hardened prison/jail cons find previously unknown satisfaction, purpose and healing in gardening and caring for pets? Animal husbandry and agriculture's roots run deep in all of us, as do hunting, fishing and collecting food (gathering).

In aggregate, there are significant swatches of open land in cities which are completely underutilized. There are rooftops which are unused which could support growing boxes. So-called "Third World" cities--so often looked down upon by spoiled first-world residents-- often have robust and sophisticated urban and/or suburban suppliers of food, especially fowl and fish which can be grown in small-scale environments.

When fish and animals are grown in large-scale industrial operations, it is an environmental catastrophe: the staggering quantities of animal waste are a pollutant, the antibiotics used to suppress the spread of disease in an unhealthy monoculture setting are detrimental to the animals and those who eat them, and so on. Small urban plots supporting a few chickens (or a small suburban pond for fish) are healthier all the way around.

Cities need not be entirely dependent on some distant oil-dependent industrial production of grain and factory-meat. That choice is one based on ignorance of what is possible, ignorance of how cities fed themselves a mere 120 years ago (never mind 500 years ago), and a gross misunderstanding/ incompetence on the part of Fiefdom-Elite dominated city officials and urban residents.

We in the so-called "First World" could learn quite a lot from our own past and from successful, innovative "Third World" cities.

The Geography of Nowhere: The Rise and Decline of America's Man-Made Landscape (James Howard Kunstler)

The City in Mind: Notes on the Urban Condition (James Howard Kunstler)

Streets for People: A Primer for Americans

The Death and Life of Great American Cities

The Works: Anatomy of a City

Books on the industrialization of food production in the U.S. and the consequences:

The End of Overeating: Taking Control of the Insatiable American Appetite

The Omnivore's Dilemma: A Natural History of Four Meals

Rats in the Grain: The Dirty Tricks and Trials of Archer Daniels Midland, the Supermarket to the World

The Informant: A True Story

Self-Sufficiency/Gardening, much of which can be applied to urban/suburban zones:

When Technology Fails: A Manual for Self-Reliance, Sustainability, and Surviving the Long Emergency

Gardening When It Counts: Growing Food in Hard Times

The Urban Homestead: Your Guide to Self-sufficient Living in the Heart of the City

It's a Long Road to a Tomato: Tales of an Organic Farmer Who Quit the Big City for the (Not So) Simple Life

Five Acres and Independence: A Handbook for Small Farm Management

Food Security for the Faint of Heart

A Nation of Farmers: Defeating the Food Crisis on American Soil

The Humanure Handbook: A Guide to Composting Human Manure

Rainwater Collection for the Mechanically Challenged