Depending on debt to fuel nominal growth leads to an economic death spiral.

Sometimes one chart says it all. Here is a chart of the S&P 500 (a broadly based measure of the U.S. stock market) in a ratio with total consumer credit, courtesy of frequent contributor Chartist Friend from Pittsburgh.

Charted against consumer credit, the S&P 500 (SPX) collapsed after the 2000 dot-com bubble burst and has been tracing out a descending channel since then. 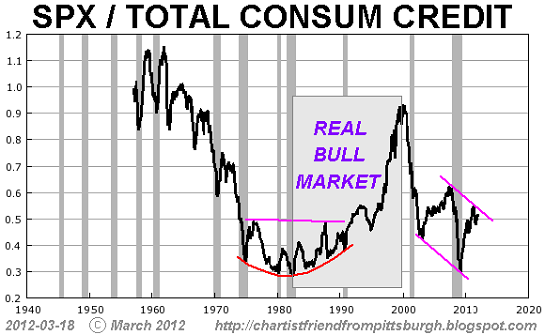 A funny thing happens when you price the stock market in something other than itself, say gold or the PPI or in this case Total Consumer Credit Outstanding. You wind up with a depiction of the market that is sometimes very different from the headline-nominal performance number. The following chart shows that in the 80's and 90's we had a real bull market, one based on production and innovation that was able to outperform the growth of credit in the economy. Excessive borrowing wasn't needed during that time. Now we're borrowing like a drunken shopper, and all we can come up with are centrally planned consumer-oriented bubbles.

What we see very clearly in this chart is the dramatic spikes created by credit bubbles--the housing bubble in 2001-2007--and massive Central Planning intervention: The Federal Reserve's expansion of money supply and constant injections of liquidity into markets and the Federal government's $6 trillion bailout/stimulus debt binge since 2008.

The critical feature of each credit bubble is that the SPX responds with less vigor to each dose of credit. This is the classic downtrend--lower highs, lower lows.

This is the chart of a death spiral. Here is one way to understand the dynamics revealed in this chart: when depreciation of productive assets (factory tools, software, refineries, etc.) outstrips new investment in productive assets, then output, income and profit decline. (Note that building McMansions in the middle of fields and pumping hundreds of billions of dollars into overseas adventures are not productive investments, they are mal-investments.)

Once the cost of servicing all that new debt outstrips increases in income, then there is less money available for productive investment. Debt service and mal-investment thus set up a positive feedback loop, a.k.a. a death spiral.

The housing bubble created over $5 trillion in new debt to service while it produced effectively zero new productive investment (housing is ultimately a form of consumption).

The Fed's injections of liquidity via trillion-dollar purchases of toxic mortgages and Treasury bonds does not funnel money into productive investments--all it accomplished was to further incentivize speculative churning and financialization to enriched the few at the expense of the many.

So sit back, tighten your seatbelts and enjoy the death spiral ride, brought to you by the Federal Reserve and your elected servants of the financial Elite. Now that the latest credit bubble is popping, the market will roll over and continue tracing out the down-channel until it hits zero: the next credit bubble won't spark a rally at all, it will simply spark implosion.

For more on the dynamics of financial fraud and credit bubbles, please check out:

Money from Nothing: A Primer on Fake Wealth Creation and its Implications (Part 1) (March 12, 2012)

Money from Nothing: A Primer on Fake Wealth Creation and its Implications (Part 2) (March 14, 2012)