The feedback of failure, loss and defeat is our most helpful teacher.

I want to praise horrendously costly lessons, as those are the only ones we really learn from. We hype the value of "book learning" and give lip-service to "learning from others," but in real life we really only learn the truly valuable lessons from painful defeats and costly losses.

Without the feedback of failure, loss and defeat, we learn little. Indeed, winning, gain and approval are the most dangerous forms of feedback, as they nurture hubris and false confidence.

I just re-learned a horrendously costly lesson the past few months: the stock market has little to do with the the "real" economy. Like many others, I failed to heed my own advice, and the tuition to learn (or re-learn) this lesson is high. (Nothing that a half-gallon of ice cream, a box of Ho-Hos and a night spent weeping in a closet couldn't fix, fortunately, and no, I did not kick the dog, cat or parrot).

Strained levity aside, this is a very important lesson, and one that we've had numerous opportunities to learn. For example, the "real" economy was already faltering in 2007, but the stock market powered on for an entire year on Federal Reserve injections of false confidence ("subprime is contained," etc.) and rabbit-out-of-the-hat monetary tricks.

Once again we are experiencing that same interesting divergence between the real economy and the stock market and various indicators. The Economic Cycle Research Institute (ECRI) has courageously maintained its call for recession, even as the mainstream media relentlessly touts a variety of positive official indicators.

If we scrape away the hype, manipulation, questionable guesstimates (long live the Birth-Death Model!), etc., there are only a few things that eventually matter: household income of the 99% (the 1% may own most of the wealth but they don't prop up much of the real economy), corporate profits and the relative strength of the U.S. dollar, as a strong dollar crimps overseas profits of U.S. corporations.

Most of the other indicators are either gamed (unemployment rate is down because tens of millions are no longer counted and as Karl Denninger observes, we've run out of people to fire), open to false positive interpretation (if the economy is adding so many jobs, why are income and tax receipts down?) or based on questionable data (should "owners equivalent rent" really be the largest component of consumer price index?).

Here is a snapshot of household income. If job and GDP growth are so strong, why is income declining? If income drops, people have less money to spend or leverage into more debt. The incomes of the bottom 60% topped in 2000 while that of the top 40% doubled-topped in 2007 at the height of the housing bubble. Everyone's income has been declining since 2007.

Corporate profits have been on a tear since the 2009 bottom, but as I have noted many times, much of this strength is the result of a much weaker dollar that massively boosted the 40% of profits that flow from overseas sales.

If incomes are down, sales cannot rise for long on the back of leveraged debt, and rising input costs (for example, oil) put profits in a vise of stagnant sales and rising costs.

None of that matters to the market. Many observers believe the market is responding not to the "good news of recovery" but to central bank monetary stimulus "easing," and there is certainly abundant evidence for that as global markets took off in late December as central banks unleashed an estimated $2.5 trillion in free money into the system.

There may also be some complex knock-on effects of deleveraging going on that are boosting equities.

Regardless of the many inputs, the fact remains that the stock market is not reflecting any doubt about the recovery or profits. Today's sample headlines say it all:

Financials due for a rebound?

Buy the retailers on dips

Magazine covers often capture the extremes of hubris that mark market tops. Thus famous covers caught the housing bubble top in 2006, the 1982 stock market low, and so on.

The Atlantic's sainting of Ben Bernanke on its current cover may mark the top of the Fed chairman's influence--and the top of the market he has goosed to new highs. While The Atlantic did everything but draw a halo over Ben's head, I would characterize Mr. Bernanke as a tipsy teen with his foot mashing the accelerator pedal to the floor, supremely confident in his ability to navigate the careening car.

In Bernanke's case, the intoxicant is hubris, and man, there is nothing like a hubris high.

The problem with mashing your foot on the monetary accelerator pedal is that the market now depends on accelerating money supply for its "juice," and any lessening of that pedal-to-the-metal is now perceived as "tightening." 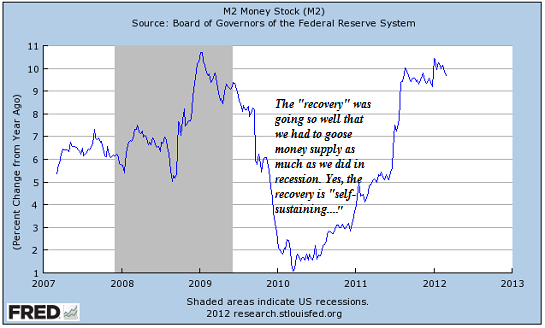 Hubris--"a loss of contact with reality and an overestimation of one's own competence or capabilities, especially when the person exhibiting it is in a position of power"-- leads inevitably to retribution and ruin. Why is this so? Because we learn nothing from winning and success except to do more of what we're already doing. Then comes the inevitable over-reach and unintended consequences.

The Fed chairman has been playing a comical public-relations blame-game recently in which he chides a spendthrift Congress for running huge deficits via selling Treasury bonds. Who has been buying those Treasuries in the hundreds of billions of dollars? the Fed. Talk about handing the junkie a full needle and then lecturing him on the dangers of addiction.

Who lowered interest rates to zero so the cost of ballooning deficits is absurdly low? The Fed. So Bernanke is both the enabler and pusher of Federal debt, and the tsk-tsk taskmaster telling the world that deficits are unsustainable and inflation is not his fault.

Let's agree to meet here a year from now in mid-March 2013 and see how Bernanke's policies have played out. Though Ben is drunk on hubris, his fans see only brilliance in his weaving and acceleration. But we're all in the car, too, and though nobody in what passes for the "intellectually rigorous" mainstream media seems to think it possible, a big "unintended consequence" tree might just jump out in front of Ben's Hubris Express.

That will give the nation a horrendously costly lesson, and perhaps we'll actually learn something from it. We seem to have learned precious little from Ben's four years of saintly success in goosing markets and PR to new heights.