If This Is Such a Strong Economy, Why Does This Chart Look Recessionary?   (March 2, 2012)


Is the U.S. really a post-oil economy?

One way to gauge the real economy is to look at charts of the GDP, wages, household debt and the price of oil; another way is to correlate all of these on one chart. The following chart (courtesy of frequent contributor B.C.) plots these four metrics thusly: GDP/(wages/household debt)/price of oil.

What pops out of the chart is what happens when oil spikes higher or declines. In 1973, the first oil shock sent the economy off a cliff. Conversely, when oil fell to $12/barrel in the late 1990s while wages were rising strongly, the plotline peaked, reflecting a strong economy.

In 2008, oil spiked to $140/barrel in 2008, household debt reached record heights and wages began stagnating, and the economy fell into a sharp recession. When oil plummeted back to $40/barrel in early 2009, the plotline spiked up.

When oil prices and household debt are high while wages stagnate or decline, the economy sinks to recessionary levels. 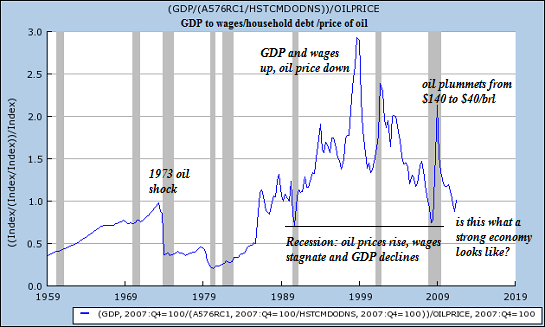 This chart utterly discredits the economics profession and those who claim that the post-industrial economy ("deindustrialization" and "financialization") is not oil-constrained and the service economy is what the rest of the world should adopt as the normative standard at $100+/barrel oil.

The current plotline is hovering just above the recessionary levels of late 2008. Does this reflect a strong economy, or one that is weak? If oil keeps climbing, what will that do to a visibly weak economy?

The Bulls are convinced that the U.S. has decoupled from the rest of the world and from the price of oil. This chart makes the opposite case: the price of oil matters, especially when wages are declining and household debt is elevated.