The conventional view is that the U.S. economy is "growing again" and the market is "cheap." Sounds like the perfect setup for a crash in 2010.

U.S. GDP rose by 3%, corporate profits are leaping and stocks are cheap based on forward earnings. A stock market crash appears "impossible"--unless you look beneath the ginned-up numbers at the real economy.

A reasonably grounded place to start exploring the idea that the U.S. stock market could crash in 2010 is John Kenneth Galbraith's classic book, The Great Crash 1929.

"Indeed the temporary breaks in the market which preceded the crash were a serious trial for those who had declined fantasy. Early in 1928, in June, in December, and in February and March of 1929 it seemed that the end had come. On various of these occasions the New York Times happily reported the return to reality. And then the market took flight again."

As the market recovered in late 1929, the bullish faith that the "market would always bounce back up" that had driven the market to new heights in 1929 remained firmly in place. Few participants in the 1929 crash anticipated a Depression; rather, most saw the market's quick recovery as clear evidence that the economy and market were both sound.

But the reality was different: the U.S. economy and stock market were both riddled by fundamental problems which had been masked by the Bull market euphoria.

"There seems little question that in 1929, modifying a famous cliche, the economy was fundamentally unsound. This is a circumstance of first-rate importance. Many things were wrong, but five weaknesses seem to have had an especially intimate bearing on the ensuing disaster. They are:

1. The bad distribution of income.
2. The bad corporate structure.
3. The bad banking structure.
4. The dubious state of the foreign balance.
5. The poor state of economic intelligence.

"Had the economy been fundamentally sound in 1929 the effect of the great stock market crash might have been small. Alternatively, the shock to confidence and the lost of spending by those who were caught in the market might soon have worn off. But business in 1929 was not sound; on the contrary it was exceedingly fragile. It was vulnerable to the kind of blow it received from Wall Street."

Let's take a look at a chart of the 1929 crash. Despite the hoopla about "Black Thursday", October 24, 1929, it is clear that the market "crash" was actually a rather drawn out affair. 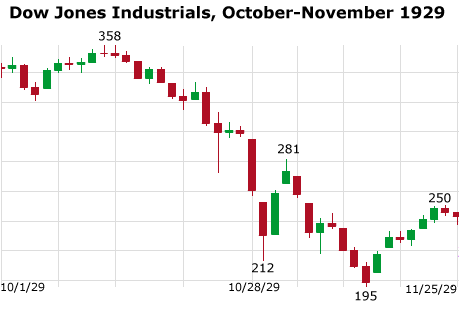 The actual top had been made a month earlier on September 3, 1929--381-- having risen sixfold since the start of the decade.

A "crash" is not a momentous one-day drop--it is the realization that the house of cards is finally collapsing under the weight of reality.

2. The bad corporate structure.
CHECK. The operant phrase of our era is "off-balance sheet."

3. The bad banking structure.
CHECK. Simulacrum reforms change nothing. U.S. commercial banks generated over $22 billion in profits from derivatives trading in 2009, even as the Federal Reserve nationalized the home mortgage market and shoveled money into the banks via loaning them unlimited funds at 0% interest and paying them interest on their deposits at the Fed. The U.S. banking sector is rotten to its very core.

4. The dubious state of the foreign balance.
CHECK. Imports slumped in 2009 but are once again outracing exports; the U.S. current account deficit is both unsustainable and structural.

5. The poor state of economic intelligence.
CHECK. Official data is manipulated propaganda--phantom jobs are created by the "birth-death model" which is based on prosperous times, not recession, to name but one fraud. Corporate earnings are flim-flam based on pro-forma earnings and other trickery. GDP "grows" yet the source of the growth is Federal government borrowing--so is squandering borrowed money "growth"?

The entire system of "economic intelligence" is like a dryrotted shack held together with soggy Chinese drywall: it is all artifice, lies, half-truths, manipulation and propaganda, aimed at propping up the "confidence" which is the essential fuel for a top-heavy stock market built on sand.

Could the stock market crash? Based on Galbraith's five causes of Depression, the answer is clear: yes, it can.