In a classic Marxist set-up, Capital is free to exploit labor because labor is in surplus.

The fundamental dynamics of the U.S.-China trade partnership--certainly the biggest economic story of this generation--boil down to "capital exploits labor." I am well aware that this sort of quasi-Marxist analysis is supposed to be passe in the era where young nerds can start billion-dollar enterprises in a garage or dorm room. Capitalism is a priori "win-win," as all those workers in China are getting ahead while our youth launch $50 million IPOs of social networking Web 2.0 companies.

But if you scrape away the high-gloss propaganda and myth-making, then the fundamental dynamic is definitely Marxist: American capital jettisoned American labor as a costly hassle in favor of cheap, no-hassle Chinese labor.

Since Capital's best buddy in the whole world is the Central State and its proxies, i.e. the Federal Reserve, then the Central State and the central bank (the Fed) smoothed over the exploitation and furthered the consumer economy by inflating a credit-housing bubble. Since 60% of American households own a home, this enabled the increasingly impoverished "middle class" to borrow trillions of dollars in "free" money that could be spent--surprise!--on the new imports from China that filled the shelves of big box global retailers everywhere.

Allow me to illustrate this dynamic by deconstructing two recent stories in the Mainstream Financial Media: 'Superjobs': Why You Work More, Enjoy It Less (WSJ.com) Businesses expect a lot more out of their employees these days...

Taco Bell and the Golden Age of Drive-Thru Operational innovations at restaurants like Taco Bell rival those at any factory in the world.

The first piece describes in clinical fashion how U.S. capital is ruthlessly exploiting labor, demanding more work for little to no additional pay. The underlying dynamic here is purely Marxist: capital encourages over-supply of labor, which then drives the value of labor down. Competition for the few jobs available makes desperate wage-earners willing to put up with exploitation and insecurity because the options of escaping the cycle of centralized Corporate value extraction are insecure and risky.

Global Corporate America fosters a surplus of labor in the U.S. via three mechanisms:

2. H1-B visas for high-tech workers (now falling out of favor as those positions are better filled directly in India and China).

3. ship production, software coding and back-office functions to China, and to a lesser degree, to India and elsewhere in east Asia.

The unemployment rate among PhDs is roughly 50%. So much for "winning" by becoming ever more educated. The number of slots in academia is shrinking, and the total number of research positions is relatively inelastic. For more on academia's "plantation economy," please read Faulty Towers: The Crisis in Higher Education (The Nation).

With labor in surplus, capital is free to demand whatever it needs to boost all-important profits. The propaganda machines in HR (human resources) spray-paint slogans everywhere ("you're really really valuable to us, Super-Duper Team Member!") but everyone knows the reality: everybody is dispensible, and everyone but the CIO at a hot startup a few months from an IPO is a corporate serf a paycheck away from being booted out of the castle into abject poverty.

As a result of this exploitation--known as "wage abritrage"-- corporate profits (which boost the wealth of the top 10% who owns the vast majority of stocks and mutual funds) are extremely plump and juicy: 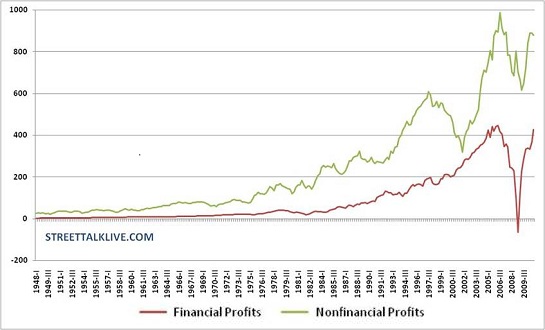 In the second piece, BusinessWeek breathlessly assures us that we have thousands of highly efficient factories running 24/7 in the U.S.--fast food outlets. Yes, all 6,000 Taco Bells are miniature factories pumping out "product" in vast quantities. The fast food "industry" revenues are $168 billion a year, and the workers, we're told, are paid $1.25 above minimum wage--woo-hoo, love you, Corporate America!--which means that the full-time employee makes $16,500 a year.

$16K a year doesn't go very far in urban America, but there is no pressure on Corporate America to raise wages.

I realize that I am an outsider, and biased against global corporate power regardless of the nominal country of origin (down with Canal+!), but I still found it noteworthy that BusinessWeek could run thousands of words of glowing praise for the profitable efficiency of the fast food "industry" without noting that it isn't an industry at all--it's just a consumerist fantasy (fast and cheap meals that require no effort or discipline) that produces "food" of low value that pushes the consumer into ill-health with overloads of salt, sugar, and low-grade fat.

70% of the fast "food" served is via the drive-through window, which suggests that an overworked, stressed out, focused on getting through the next two hours American is opting to shut the kids up and stave off hunger by pulling into the drive-through lane and loading up on a "meal" that they know is bad for them but they have no time to make a real meal at home (or so they've been brainwashed by thousands of hours of adverts).

If Taco Bell is the "manufacturer/factory of the New America," then I think we need a peaceful revolution, and soon. The toadies and sycophants of the financial media are pleased to worship 1) CEOs 2) profits 3) efficiencies 4) globalized "growth" as long as its owned by global corporations and of course, everyone's favorite, 5) innovation, because "innovation" drives profits!

Elsewhere in the latest issue, BusinessWeek breathlessly cooed over digital game company Electronic Arts latest "innovation," which was selling a digital parrot for $10 a pop that sits on your digital warrior's shoulder.

Excuse me while I raise my glass to American "innovation." If pumping out fast food garbage (hello, 60% obesity rates, is there any connection?) is the new American "factory" and "innovation" is selling kids with access to Mom's credit card a $10 digital parrot (and what does the parrot say? "Kill 'em all and let God sort 'em out, brawk!") for their hyper-violent fantasy wargame, then this nation is well and truly doomed.

To reap a fat profit, you need to sell the stuff being imported from the American-owned factories in China. Since wages have been flat for decades, that posed a problem, as consumers were tapped out. Never fear, capital's best buddy rode to the rescue, inflating a stupendous credit-housing bubble that enabled the working stiff to speculate "like the big boys" with free money and limitless leverage, all supported by lies (liar loans) and the misrepresentation of risk.

But now, at long last, capital's doting partner, the Federal Reserve, has run into a spot of bother: the only way to keep profits rising is to crash the dollar, and doing that has squeezed the purchasing power of the debt donkeys. By exporting inflation to China and the rest of the world, the Fed has engineered massive profits for U.S. corporations (when profits earned overseas are stated in dollars, presto, a 10% increase) but it has also forced China into raising prices and fueled an oil and import-driven inflation in the U.S. which has caused millions of insolvent households living paycheck to paycheck to cut back on their consumption.

China has its own problems, namely runaway domestic inflation (thanks, Federal Reserve) and finding places to dump its excess dollars. It was a wonderfully beneficial trade for awhile: we print paper money, and you give us tangible goods for the paper. Thank you very much, and we can offer you some terrific low-yield Treasuries to recycle your growing stash of dollars.

The Fed's inflation games are sinking the value of the dollar, and the Chinese are not amused. They are trying to buy tangible resources with their ocean of depreciating dollars, and even sinking to buying Spanish debt.

They have another problem: as capital's return in China slips, it will exit China just as fast as it exited the U.S.

There is a grand irony in that dynamic: a supposedly Communist country trying to run a central-command quasi-capitalist economy will find that Marx had a point after all. Not that the leadership is at risk themselves; the ChiCom offspring already have homes in Vancouver B.C. and Los Angeles and citizenship/green cards, and the family fortune is safely invested in Switzerland and North America.

The "story" is that the Chinese consumer is about to step up spending, and as a result, "you gotta be in China to profit from all the trillions in new consumer spending." The reality is that the Chinese middle class is already spending like drunken sailors and their 900 million rural compatriots already own TVs and other cheap consumer goods.

The reality is that Capital has already skimmed the big, fat easy profits, and it's looking elsewhere as labor costs and pesky regulations rise in China. The truth is American and European corporations have already earned out their investments in China, and shipping the factories from China to Vietnam is not much different than crating the factory up in the U.S. and shipping it to China.

There is a theory that the Fed's "master plan" is to sink the dollar to the point that the low-income states in the U.S. will be the lowest-cost manufacturing base in the world.

At $16,500 a year for full-time workers pushed to maximum production, they might be getting close.

SEED SALE: Seed prices are set to rise, along with many other essentials. Now is a good time to get whatever you need for this year's planting: Spring Special: 10% off Everlasting Seeds.