Everybody wants solutions. Here's the first step to any real solution: pin down exactly where all the money is going. Only when you know the true, full costs in any system, and have a system of accountability that aligns with the cost structrure, can any real solutions emerge.

Everyone agrees education is important, but the "solution" demanded by the Education Cartel and Fiefdom is more money. More money may or may not be the solution to what's wrong with education, and to ascertain that, we need to first "follow the money" and track down exactly where every dollar currently allocated to education goes.

Unsurprisingly, perhaps, education does not have a transparent cost structure.

Once we have a full accounting of every cost, then we can compare those costs on a per capita basis (so we're adjusting for population growth and inflation) with costs in the recent past (20 years ago, for example) and then move on to aligning the cost structure with a metric of accountability.

For example, if a school district is getting considerably more money per capita than it did 20 years ago, yet the performance and graduation rates of its students have declined, then we can conclude that the additional money actually hurt student performance.

In that case, "more money" is akin to throwing gasoline on a fire to put it out. The problem and thus the solutions obviously lie elsewhere: in better administration, better coordination with parents, better teaching techniques, etc.

Hmm. Is there any possible conclusion other than most of the skyrocketing costs of higher education can be traced to a rapidly expanding bureaucracy? The Sacramento Bee has offered a database of California government employees' salaries (not including benefits or retirement costs).

I looked up a professor of math I know who teaches full-time at the University of California at Berkeley, one of the premier research universities in the world. His salary was $76,000, roughly one-third that of the now-famous lifeguards in Orange County who pull down $200,000, and less than half of what senior high school teachers in Illinois earn (see below).

Those within the State Fiefdoms who have arranged incomes which are disconnected from the reality of the job market and performance naturally defend their booty. Brent Jacobsen, president of the Lifeguard Management Association, defended the lifeguard pay in Newport Beach: We have negotiated very fair and very reasonable salaries in conjunction with comparable positions and other cities up and down the coast.

Do the taxpayers of Orange County agree with this gent's definition of "fair and reasonable"? The more important question is: why was it "news" what public employees make? Shouldn't that information be presented to the public in every budget? If privacy is an issue, then list the position and the salary and pension costs while keeping the employee's name confidential.

For a rare gloves-off appraisal of academia, please read Faulty Towers: The Crisis in Higher Education. Those of you who teach in academia (or who know someone who teaches in a university) will be nodding your head: yes, yes and yes.

It seems that some members of the Education Cartel and Fiefdom came to do good but stayed to do well--as in triple the national median earnings of full-time workers:

And how about those pension and retirement costs? Exactly how much of the city budget goes to those costs? We have an answer for New York City, and it is sobering. NYC budget - pension costs skyrocketing:

It's expenses that are killing us: over the past decade, New York City hasnt really grown its population but has increased expenses from $28.8 billion to $49.7 billion. The vast majority of that $20.9 billion increase has been in the form of more dollars to fewer employees. Pension costs are killing us most: this has grown from $1.3 billion in 2002 to $8.3 billion in 2012.

Draw a chart of these costs and extrapolate them out a few years. How can anyone claim these are sustainable? Has there been a comparable rise in the quality and quanitity of city services?

Yes, Baumol's Disease (which I covered in detail in Productivity, Baumol's Disease and the Cliff Just Ahead, December 8, 2010) accounts for the slower pace of high-labor-cost productivity, but that is not an explanation for a 72% rise in city expenses or a 638% jump in pension costs in a single low-inflation decade--it's an excuse.

To understand any problem with an eye on an actual solution, then start with where all the money is going. This leads to uncomfortable conclusions, because a lot of the Central State money ends up in millions of pockets. For example, Social Security and Medicare. The Millionaire Retirees Next Door: Typical retired couples will collect $1 million or more in Social Security and Medicare. This is more than they paid in, and the cost will fall on today's workers.

The problem is that wages are declining while taxes and other costs are rising. Exactly how can we expect workers in the future to pay our rapidly rising Social Security and Medicare costs? is there any accountability in Medicare that aligns skyrocketing costs with results or performance? If so, why does healthcare (a.k.a. sickcare) in the U.S. cost twice as much per capita as it does in our developed-world competitors such as France and Australia? 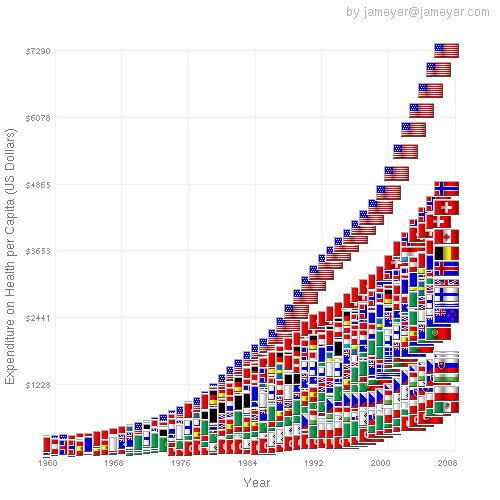 I have addressed these issues many times, for example in The Devolution of the Consumer Economy, Part II: Rising Costs, Declining Wages (April 8, 2011) and Complexity: Bureaucratic (Death Spiral) and Self-Organizing (Sustainable) (February 17, 2011).

I have highlighted the Education and Sickcare Cartels, but there are many others with exploding costs and zero alignment with accountability or performance. The Department of Defense, famous for routinely losing track of hundreds of billions of dollars (and does anyone lose their job over that gross mismanagement? No, everyone gets a promotion and raise for doing such a swell job), manages to triple the cost of every weapons system, regardless of the actual performance benefits (marginal, perhaps?)

The new F-35 fighter aircraft cost $150 million each, once we add in the overruns, replacing the Super Hornet F-18 E/F that cost $57 million each. Is the F-35 really three times better than the F-18? Which would a commander facing squadrons of bad guys rather have, 30 F-35s or 90 F-18s? (I suspect they'd take the 90 F-18s, as long as they were loaded with the latest Sidewinder and long-range air-to-air missiles.)

Once lifetime costs are included, the F-35 will cost upwards of $300 million each. If we assembled some fighter jocks and working engineers in a "skunk works" untouchable by the DoD bureaucracy and Congressional meddling, does anyone doubt that they could design and build a superior next-generation steathy fighter aircraft for $57 million each?

If you really want a solution, then start by pinning down exactly who's getting all the money. Then find out if they're accountable for how it's spent. Nobody wants to admit the reality: our nation is dominated by cartels and fiefdoms serving entrenched constituencies whose budgets are simply not sustainable, i.e. they are disconnected from what the nation actually produces in surplus wealth, and rising far faster than wages (declining) or the underlying economy (also declining once you subtract Savior State borrowing and spending).

Those with the bloated budgets are also largely unaccountable, both for how the money is spent and for the results.

Very few in the public sector have the courage to "follow the money," because they know the trail leads right to their own pockets or to those of their cronies and constituencies. A lack of accountability benefits everyone who is complicit, because as long as no questions are asked about results or performance, then the money spigots remain wide open.

The problem is that this open-spigot spending is unsustainable. If we don't dare look at real solutions, then the problems will soon expand beyond our control.