Medicare is an example of an unsustainable system that will go away in the decade ahead.

Here are the sobering facts about the number of workers and those drawing Social Security, Medicare and Medicaid entitlements in the U.S. While the government claims to have a "trust fund" to pay for Social Security and Medicare, this is illusory propaganda. There are no funds set aside to pay these entitlements--they are "pay as you go" programs funded by current tax revenues. If the tax revenues don't cover the programs' expenses, the Treasury sells bonds, i.e. issues debt to pay the entitlements.

Social Security (SSA) has 61 million beneficiaries as of March 2012.

Medicare has 49 million beneficiaries as of November 2011.

Medicaid has over 50 million beneficiaries; another source puts the current number at 58 million.

Kaiser Family Foundation says roughly 7 million "dual-eligibles" who receive both Medicaid and Medicare, so let's use the data point of 50 million Medicaid-only recipients.

We can assume that most people drawing Medicare benefits also draw Social Security, while the 8+ million drawing disability from Social Security are also covered by Medicaid.

As I have noted here many times, there are only 115 million full-time jobs in the U.S. 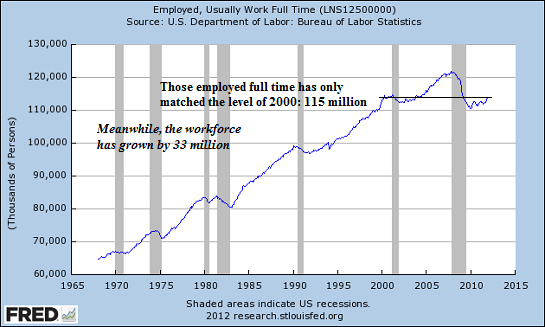 That means the ratio of workers to recipients of significant "pay as you go" entitlements is roughly 1-to-1: 115 million full-time workers and 110 million people drawing Social Security and Medicare/Medicaid.

These programs consume the majority of the Federal budget. The Federal government spends around $3.7 trillion and collects around $2.6 trillion in taxes, so the basic deficit is $1.1 trillion. Off-balance sheet "supplemental appropriations" mean the real deficit is actually considerably higher.

The average benefits extracted from the system run from $393,000 to $525,000 (due to the benefits extended to non-working spouses, benefits for never-married people may be somewhat lower). Average annual costs per beneficiary run as high as $18,000, though expenses typically rise significantly in the last year of life.

As I have reported here earlier, a friend's father was in the hospital a few years ago for less than a week for "observation" and a non-invasive gall-stone procedure. Medicare was billed $120,000, or roughly the lifetime contributions of three workers for this modest procedure and a few days in a hospital. My Mom had an office procedure performed on one of her toes and Medicare was billed $12,000. An office procedure (not in surgery) that took a few minutes absorbed 1/3 of my entire lifetime contributions to Medicare.

What we have is a system where the full-time worker to beneficiary is already 1-to-1 and the system pays out 10 times more per person than it collects in taxes. The Medicare system would need about 10 workers for every beneficiary to be sustainable. Right now the ratio is just above 2-to-1. That simply is not sustainable.

Wishing the math were different does not make it different.

For more on this topic, please see:

How We Do Harm: A Doctor Breaks Ranks About Being Sick in America (print)     (Kindle)


New Max Keiser: On the Edge with Charles Hugh Smith. I was sharper in the "live in Paris" interview but Max is always worth watching:

"Renouncing debt would be the way forward and eventually that will happen everywhere--either the currencies will go to zero, what people call hyperinflation, or the debt will be defaulted on."


Fer crying out loud, does everyone already have their garden in?: largest discount ever from Everlasting Seeds. It's the perfect time to start your veggie/herb garden, and Everlasting Seeds is offering oftwominds.com readers 15% off all products: Buy a Vegi-Max and share with friends!