The second wave of "now is a good time to buy real estate" lemmings has just raced off the cliff to their financial ruin. Sadly, this "housing is now cheap" rush to buy was easily predictable years ago.

Not to toot this site's horn, but isn't reality tracking this chart I posted in August 2006? Phase Transitions, Symmetry and Post-Bubble Declines. Doesn't the recent blip up in sales of foreclosed properties look like "Phase 2"?

Just as one of many such examples, here's a clip from a recent New York Times article A Town Drowns in Debt as Home Values Plunge:

Kenny Rogers, a data security specialist, moved into Mountain House last year, buying a foreclosed property on Prosperity Street for $380,000. But the decline in values has been so fierce that he too is underwater.

The Martinezes bought their house in early 2005 for $630,000. It is now worth about $420,000. They have an interest-only mortgage, a popular loan during the boom that allows owners to forgo principal payments for a time.

But these loans eventually become unmanageable. In 2015, Mr. Martinez said, his monthly payments will be $12,000 a month. He laughed and shook his head at the absurdity of it.

Next up: my chart of how the U.S. housing bubble bursting would take down the global economy. Isn't reality playing out rather closely to the scenario depicted here in 2006? Housing Dominoes Fall (July 26, 2006)

Here's another one from 2006 which also seems to be playing out:

The point here is that the forces unleashed by the global credit bubble popping and global deleveraging will play as large a role in domestic (U.S.) real estate valuations as any factor anchored in the domestic economic landscape.

So when does housing really bottom? Perhaps looking at when mortgage re-sets finally exhaust forced selling/forcelosures offers one clue:

Based on this chart, it looks like re-sets finally decline around 2012.

We can also consider how far housing needs to fall to return to its historical macroeconomic role in the U.S. economy. Based on this chart, we can guess real estate measured on a national basis will have to fall at least 50% from its peak to reach previous troughs.

Notice how the last real estate bubble which peaked in 1990 reached a mere 115% of GDP. The 2005-6 bubble top exceeded this by such a degree that we can suspect previous bubbles will not be adequate models.

If GDP shrinks, as it is wont to do in deep recessions, then housing will have to fall even farther to reach its historical norms. 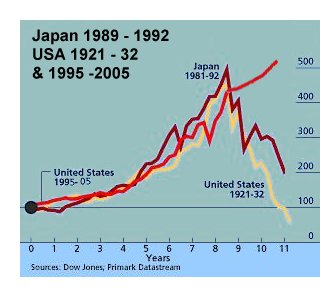 Note that the Depression-era decline actually overshot to the downside, dropping below its starting point--a key feature of post-bubble behavior. Thus we must be open to the possibility that housing values could drop below 1997 levels, perhaps reaching all the way back to 1985 levels.

On the optimistic side, consider the aftermath of the 1990 housing valuation peak. Real estate values declined (or went flat, which when inflation is factored in, is a decline in real value) from late 1990 through about 1997--a seven year stretch of stagnation/decline.

If this pattern holds, we can then set the top of this bubble at 2006 and add 7 years, yielding a date of 2013 as the eventual bottom.

Lastly, we can ponder "long cycles" and speculate that this 2012-2013 timeframe for a bottom matches up with various long-cycle charts rather well. But we need only refer to recent history, circa 1990-1997, to reach the conclusion that potential bottom-fishers might want to set aside their buying urges until 2012-2013.


Longtime correspondent Lloyd L. answered my Veteran's Day question regarding how many offspring of members of Congress were active duty U.S. Armed Forces. Thank you, Lloyd, for this up-to-date information:

In the current 110th Congress, only 28% of U.S. senators and 23% of U.S. representatives have served in the military (active duty, Guard, or Reserve).

Not all of the results are in yet, but it looks like this years election will continue that downward trend.

In the Senate, there are ten certain seat changes so far, including Senators Obama and Biden. Three of the departures are vets, and none of the eight known replacements are. Of the three remaining open races, the only incumbent vet is Sen. Stevens (R-AK), and the only vet challenger is for Sen. Chambliss (R-GA) seat.

That means the new Senate will have a minimum of 25 vets, but could have up to 29 if both veterans still in contention win and if vets are appointed by the Illinois and Delaware governors to fill the Obama and Biden seats.

In the House, there are 50 certain seat changes so far. Fifteen of the departures are vets, and only 12 of the replacements are.

New essay by Chris Sullins: "The Good Life", a thought-provoking mediation on hunting, living off the land, resource depletion, delusion, weaponry, war and much more--highly recommended.

Thank you, Patrick G. ($20) for your most welcome generous donation to this site. I am greatly honored by your support and readership.