That commercial real estate (CRE) is careening off a cliff is already a given. The consequences of wealth/debt destruction have yet to be tallied.

Just in case you missed the dozens of recent stories describing the complete meltdown in commercial real estate in the U.S., here are several accounts of the grim realities:

Commerical Real Estate and REITs - It's About That Time, again...

Southern California's vast desolation indoors Almost 51 million square feet of office space is vacant in Southland, and that number is expected to continue growing well into next year

The general context is well-presented in this WSJ.com story. stripped of the usual angst--"who could have seen this coming?" etc.-- CRE is just another bubble inflated by liquidity, leverage and la-la land cash flow projections that has finally blown up. Prices are down 40% from their peaks and vacancies are soaring.

Fears of a New Bubble as Cash Pours In Real-Estate, Stock and Currency Markets, Especially in Asia and Pacific, Are Seen at Risk

Very few analysts seem to have pondered the consequences of the CRE implosion, other than to note losses will be at least $500 billion. We should recall that consensus estimates of residential real estate losses were laughably low, as were estimates of jobs expected to be lost in this recession-- 2.3 million versus the reality of 7.3 million plus millions more full-time positions cut to part-time. That's more than three times the standard-issue financial pundits' projections.

It seems "obvious" that one likely outcome of horrific losses to owners and banks in the CRE implosion is a return to recession--the dreaded "double-dip recession." I have sketched out how the dominoes might fall in this graphic: 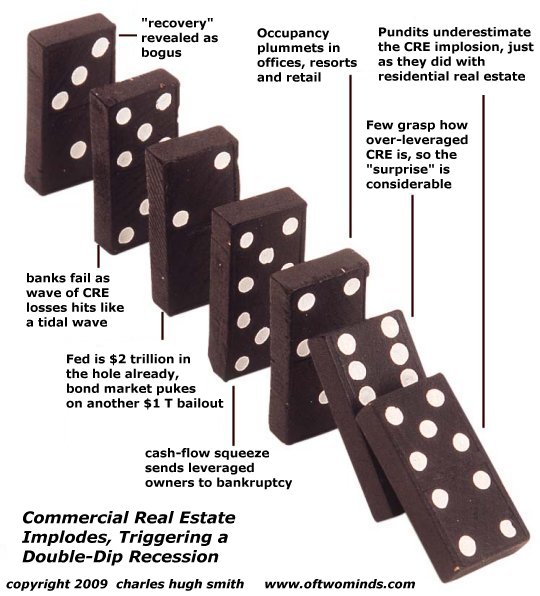 The Fed's balance sheet already exceeds $2 trillion, Treasury is selling nearly $2 trillion in bonds every year (to finance $1.5 trillion deficits and Treasuries which must be rolled over), the government and Fed have already spent $1.2 trillion propping up the residential mortgage market (99% Federal government guaranteed/underwritten) and countless billions bailing out Fannie, Freddie, AIG, etc. etc. etc.

Does anyone seriously believe the public and bond market will welcome another trillion-dollar bailout of banks and corporations which made visibly risky overleveraged bets on absurdly overpriced CRE properties?

If the bond market doesn't puke at the prospect of another $1 trillion borrowed and thrown down the black hole of "saving our financial system" (barf), then the public may well finally step up to the plate.

The prospect of more job losses is sobering, mind-numbing, and terrible. Yet as I noted earlier this week, the reality is the economy has millions of jobs which are hanging by threads due to declining income, revenues and spending. Most of these jobs are retail or white-collar positions which will directly impact CRE. As stores close, the owners are stuck with zero cash flow and very few prospects for new tenants. As businesses downsize, they move to smaller offices and leave the owners with more inventory.

The ultimate losers of the $1 trillion will be the banks which lent $230 million for properties supposedly worth $250 million at the top which are now worth $125 million at best.

How many banks will fold as CRE implodes? the number is unknown, but what we do know is there will be increasingly shrill demands for a "new bailout of troubled banks" and that the taxpayer will be the source of the money--via another trillion dollars borrowed and blown by the Federal government and the Fed.

The current optimism is based on the idea that "the worst is over." As CRE melts down and hundreds of billions of losses are accrued, as more banks fold, as the government rushes to bail out more players who deserve to be liquidated, then the fragile psychology will reverse.