Stating the Obvious: Why the Stock Market Should Crash
(November 16, 2009)

The trillions squandered on "stabilization" is not leading to "recovery" of the real economy; it is only life support keeping a sick economy from imploding. The stock market rally rests on rapidly crumbling sand.

I'm not saying the stock market will crash, only that if it had any relation to the real U.S. economy that it should crash, and soon.

The current politics of experience (a key concept in Survival+) is so warped by misleading statistics and orchestrated propaganda that it feels strange to state the obvious and find it is "that which cannot be spoken": the credit-dependent, consumer-dependent U.S. economy is going down, and going down hard, and the trillions of dollars borrowed and spent by the U.S. government and Federal Reserve to crank up a recovery have failed completely, utterly and totally.

The basic idea of Keynesian policy is simple: when the wheels fall off the private, quasi-free enterprise economy, then the government borrows and spreads mountains of money around like fertilizer which will stimulate "green shoots" of recovery.

The forgotten key to successful Keynesian policy is a government which has not been borrowing and spending trillions of dollars even during an era of so-called "prosperity." When a government like the U.S. has been propping up "prosperity" with trillions in borrowed money for a decade, then doubling or tripling the "stimulus" in the hopes that the green shoots will be enduring is truly farcical.

If the economy needed several trillion dollars in deficit spending to eke out the meager jobless growth of 2001-2007, then why does anyone think that doubling or tripling that deficit spending will create an enduring boom?

The truth is the U.S. economy has been dependent on Federal stimulus for years, both the indirect stimulus of artificially low interest rates and unlimited liquidity, and the direct spending of hundreds of billions of borrowed dollars.

Even before the financial crisis, the Federal government was borrowing and spending $400 billion a year to prop up "prosperity." All that spending simply papered over the rot at the core of the economy:

1. The primary support of the U.S. economy is consumer spending which is ultimately based on household income and assets.

Earned income has been flat to down for most Americans for years. The median income has been skewed upwards by the top 10% whose earnings have risen significantly. According to the Bureau of Economic Analysis, real disposable personal income-- income adjusted for inflation and taxes--declined 3.4 percent in the third quarter after increasing 3.8 percent in the second quarter.

In an economy dependent on consumer spending for 70% of GDP, how can GDP rise by 3.5% while personal income plummeted by 3.4%? Assuming that boost in GDP is real and not just statistical legerdemain, then where did it come from? From borrowed money, of course-- the Federal government borrowed and spent over $1.4 trillion in fiscal 2009.

In the good old days of 2002-2007, households would have borrowed and spent hundreds of billions as well. But the consumer, beset by declining assets ($13 trillion lost in the past two years), declining income (see above), falling housing values and worrisome employment trends (17% unemployment/underemployment, broadly measured), is actually cutting back on borrowing: Revolving Consumer Credit Drops 13.1% in August.

So while households are still burdened with almost $2.5 trillion credit card and nonrevolving debt (auto loans, etc.), they are paying debt down, not adding more.

And let's not forget that homeowners pulled out about $5 trillion in home equity in 2001-2007, and the home equity ATM is closed for good. That brings us to:

2. The primary asset in most U.S. households is a home, and home values are still dropping, foreclosures are still rising and the only force keeping the market from falling faster is the Federal government's defacto nationalization of the entire U.S. mortgage market.

Of the $1.5 trillion mortgage securities issued in 2009, a mere 1% ($15 billion) have been issued by banks 99% are backed by the government. The government owns over half the nation's $10 trillion in mortgages via its defacto ownership of Fannie Mae and Freddie Mac, and it has guaranteed virtually all the mortgages originated in the past year via FHA or VA.

The residential mortgage market is now effectively owned lock, stock and barrel by the Federal government and its private "central bank", the Federal Reserve.

Should the Fed and Treasury reduce their subsidies (that wonderful $8,000 giveaway tax credit to new home buyers or anyone claiming to be one), guarantees and outright purchases of mortgages ($1.2 trillion this year alone), then the mortgage market would instantly freeze up or start pricing in the very real risk that housing is not "recovering" and that anyone holding a mortgage could suffer huge losses if real estate continues declining in value.

Here are a few charts to ponder: 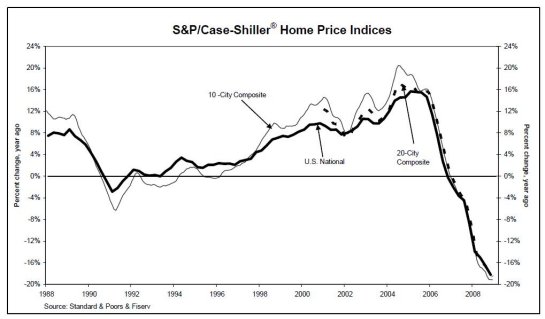 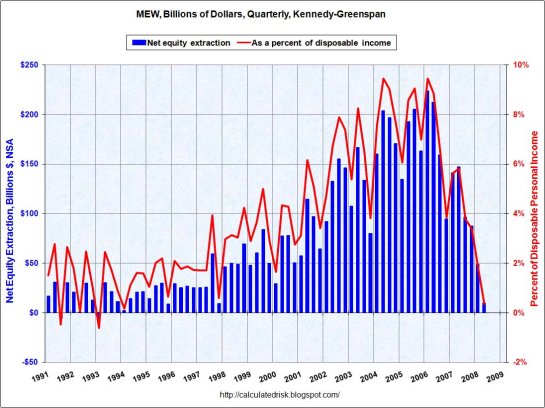 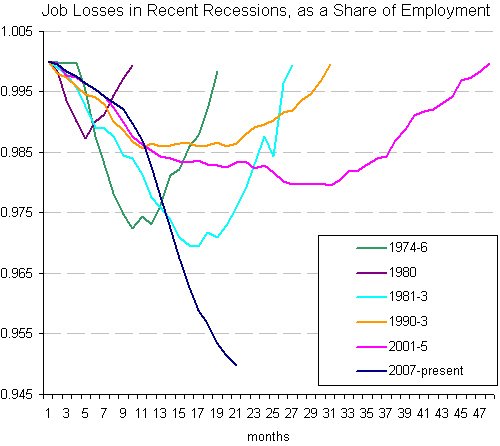 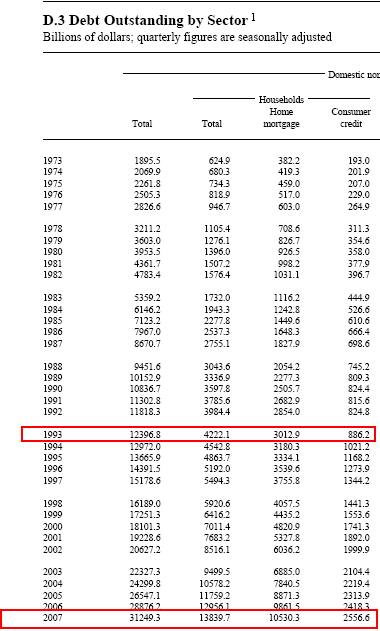 Credit Creaks into Gear: With a big boost from the feds, investors again like securities backed by assets like car loansbut it'll take years for lending to flow freely.

Foreclosures Continue to Put a Damper on Home Prices.

3. So how have companies "surprised" with higher profits? By slashing payrolls, R&D and various accounting tricks. Actual revenue growth is missing in action. So how do you keep "surprising to the upside" after you've slashed headcount, burned R&D and turned every accounting trick in the book?

The GDP Mirage By overlooking cuts in research and development, product design, and worker training, GDP is greatly overstating the economy's strength

You don't. A stock market rising on the hopes of an actual, real, tangible recovery in household income, home equity and creditworthiness is seeing mirages and hallucinating that the lake just ahead is deep and wonderful and stretches to the horizon.

Only we never reach the "lake," do we? "Stabilization" is a chimera; the reality is the government is propping up the economy via unprecedented borrowing and spending, and there is absolutely no evidence that private capital, credit or spending are rising from the "stabilization."

We are walking through the desert, kept alive by the sugar-water drip of Federal stimulus, guarantees and subsidies. The "so near, yet so far" mirage of "recovery" has been propping up the stock market for nine months, and when a slight breeze blows away the thermal illusion, then the market will crash back to the March lows, or perhaps even lower. That crash will simply reflect the state of the real economy.