Commercial real estate is in a structural cliff-dive, currently in slow-motion but soon to gather momentum.

With all the hub-bub about the foreclosure crisis in residential real estate, commercial real estate (CRE) has fallen off the radar screen of crises. Don't worry, it's still careening off the cliff; the fall is just in slow motion.

No need for a fancy report to see the signs of decay in CRE. Signs of the ongoing CRE meltdown are everywhere--empty storefronts, mall shops and vacant office complexes abound.

The causes are all too familiar: lending standards went out the window, banks loaned too much, buyers paid too much, lousy deals were avidly securitized, cash flow projections entered Fantasyland and unhealthy speculation fed widespread fraud.

Since boom-and-bust cycles of overbuilding and retrenchment are endemic to commercial real estate, it's tempting to view this as just another post-expansion trough. Since prices have already slipped a staggering 40% from the 2006 peak, those calling this the bottom of the current cycle have some history on their side.

But beneath what appears to be a standard-issue retrenchment--a glut of inventory to work through, lenders avoiding risk instead of embracing it, and so on--structural changes in the U.S. economy are changing the CRE landscape for good--and not in a positive direction.

A long-term structural decline in CRE is not just a real estate industry concern. With some $1.7 trillion in CRE loans needing to be refinanced in the next few years, a continuing decline in CRE values could push the still-fragile banking system into a new crisis and the economy back into recession as early as next year.

The extremes reached in the boom were certainly epic: investors paid $800,000 per resort hotel room and over $500 per square foot for Class A office space, numbers which no terrestrial cash flow could possibly justify. Retail centers sprouted alongside every new exurb subdivision. 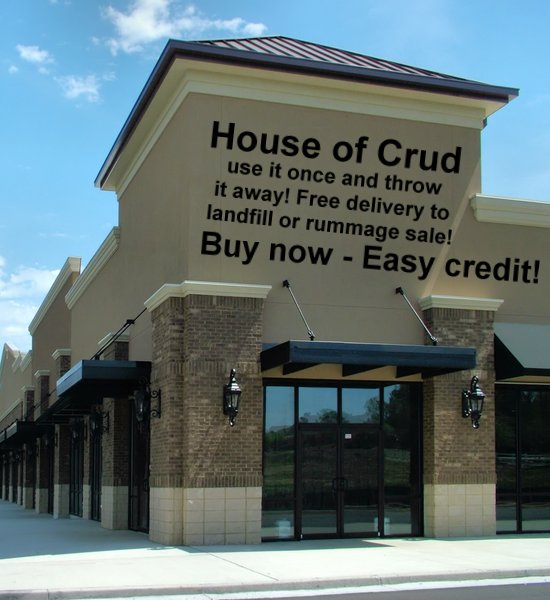 By this logic, an unprecedented boom requires an equally unprecedented bust to work through the excesses in price, debt and risk. So far so good, but there is an anecdotal body of evidence which suggests that profound systemic changes are taking place in the U.S. economy which will structurally reduce the demand for commercial real estate--not for a few years, but permanently.

1. A significant portion of CRE growth was the result of the snake eating its own tail: as the FIRE economy (finance, insurance, real estate) expanded in the credit-bubble environment of low interest rates, high leverage, plentiful liquidity and increased risk appetite, then the real estate, financing and construction industries' need for space exploded.

The go-go years also fed a boom in the business-travel hospitality sector, and homeowners flush with the "wealth effect" extracted some $5 trillion in home equity, fueling a prodigious increase in resorts and related high-end retail space.

The net result was a CRE industry which needed the rarified air of an ever-expanding credit bubble to sustain itself--the very pinnacle of unsustainability. Now that the credit bubble excesses are gone, then the industry has no foreseeable foundation for future growth.

2. Out of necessity, the U.S. consumer is retrenching for the long haul. With the home equity cash machine broken, credit tightening, unemployment topping 10% and their wealth reduced by some $11 trillion in the past two years, consumers of all ages are changing their credit-dependent lifestyles.

The 60-million strong Baby Boomer generation is facing the sobering prospects of a much-reduced retirement, or no retirement at all, and the only strategy with any guarantee of success is reducing spending and stashing away as much savings as possible.

The consequences for the retail sector, and by extension, retail real estate, are dire. If this is not just a garden-variety retrenchment but a real sea change, then retail may be overbuilt for a generation--or if online shopping continues to take market share--permanently.

The old model of 5-year leases is already under pressure. The hot new trend in retail is "pop-up shops" that unload excess inventory for a few weeks and then close. Desperate landlords are accepting the crumbs of a few weeks' rent where they once demanded a multi-year lease. And it isn't just a low-end seasonal phenomenon: The Gap and Toys R Us are successfully using the pop-up model.

Similiar trends are visible in the resort/leisure sector. Constrained consumers are no longer willing or able to plunk down $250 or more a night for an upscale resort room, and once room rates drop below a certain threshold then highly leveraged hotels are no longer financially viable.

3. The built-in problem for all CRE is that as rents/occupancy/room rates decline, cash flow falls even faster. Just because occupancy is down doesn't mean property taxes, mortgages or maintenance costs drop accordingly. Thus the upscale Four Seasons Hualalai hotel on the Big Island of Hawaii saw its annual cash flow fall from $20.6 million in 2007 to $7.9 million in 2009--a massive 62% haircut that was almost double the 35% hit in occupancy rates.

With so many properties leveraged to the hilt, a decline in cash flow sets off a wicked positive feedback loop: plummeting cash flows trigger a wave of forfeitures, foreclosures and bankruptcies which add to a glut of distressed space will only further depress valuations and rents which lead to more foreclosures, and so on. If this were a typical recession, then all this excess property would eventually be absorbed by new enterprises. But if the bubble era of ever-rising consumer credit and spending is over, then that scenario is called into question.

4. The unprecedented access to low-interest credit and leverage fueled a real estate expansion into increasingly marginal locales--distant exurban "new towns" far from jobs and tourist "destinations" without proven drawing power. As consumer credit and spending recede (recall consumer spending is 2/3 of the entire U.S. GDP) then large numbers of properties will be left high and dry with little prospect for salvation. Whatever recovery does occur will begin with proven properties, and there is no guarantee the recovery will ever reach distant marginal properties.

5. The wave of creative destruction unleashed by the Internet has yet to envelop commercial office space--but it's already reached the front steps. Just as online retail has decimated retail sectors such as bookstores, the Web is busy revolutionizing white-collar work, the mainstay of office towers and business parks.

Real work can now be done offsite/remotely at a home office, café, or anywhere but a cubicle at headquarters, and the cost advantages of this flexibility will not be going away. Yes, there are still powerful reasons to meet in person, but there are equally powerful reasons to permanently downsize travel and office costs.

Structural changes in the economy are increasing self-employment and contract labor and shrinking the scale of new enterprises. Millions of well-educated American workers already work at home, and since the average U.S. house has grown in size over the past 50 years, free-lancers and self-employed professionals have plenty of space rent-free.

High-growth companies which once hired hundreds of employees and rented entire floors are increasingly offer highly automated products and services. New-tech juggernaut Twitter recently leased more space in San Francisco as it was expanding its staff to maybe as high as--gasp!--200 employees. Will Twitter be filling that empty office tower near you? No, because its "service" is largely automated software.

7. Corporate profits depend on slashing costs. With revenues stagnant and/or precariously dependent on foreign exchange arbitrage, the only way to reliably maintain profits is to slash and burn fixed costs--like office leases, utility bills, etc. Now that head counts have been cut, then empty office space which cannot be sublet is the next target to be eliminated as old leases roll over.

These trends reinforce one another. Add them together and you get a downward arc fast gathering momentum.