Dependency rises as the dependent finds no other source for his addicition: that describes the stock market and its pusher, the Fed.

The stock market's growing dependence on the Federal Reserve will end like all dependencies--badly. In any addiction, the greater the dependency, the greater the eventual destruction when the choice narrows to withdrawal or death.

The U.S. stock market is increasingly dependent on the Federal Reserve's constant interventions to maintain the illusion of an organic demand for equities. The market's impressive climb since September 1 is only a simulacrum of a healthy market; actual organic demand from individual investors is falling. The Fed's destruction of the U.S. dollar, its relentless pumping of cash into banks' trading desks via POMO (Permanent Open Market Operations) and its destruction of any yield on cash with zero interest rates has driven money into risk assets--emerging markets, commodities and the U.S. stock market.

POMO And Market Intervention: A Primer.

The more the market comes to depend on Fed "smack" (credit and intervention) for its "animal spirits," the more inevitable the crash becomes. As this chart depicts, the farther a market rises from its "organic" (unmanipulated private-sector) demand, then the farther it must fall to reach organic demand. 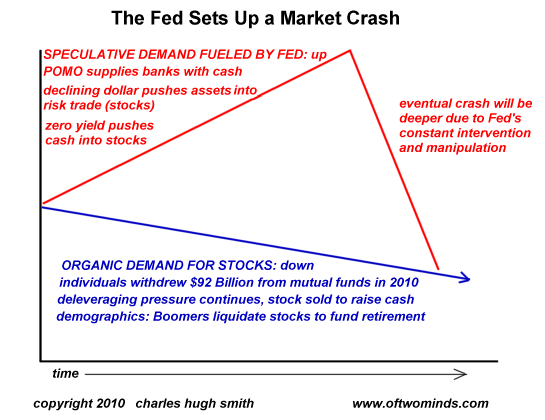 The Fed is playing a dangerous game of addiction. The Fed's constant goosing of equities is (by Mr. Bernanke's own admission) designed to spark a "virtuous cycle" in which a rising market lures investors in, further driving up prices, which creates new wealth which then triggers "the wealth effect:" people who see their 401K accounts swelling will open their wallets and spend, spend, spend.

As I have noted many times recently, this is doomed because only the top tranch of households own enough assets to benefit from the stock bubble Bernanke is blowing. Even if the top 10% do start consuming more, the "trickle down" effect Bernanke is placing his faith in is illusory: household incomes continue to decline despite the massive rampup in stock prices since March 2009.

There is a pernicious feedback loop in play in all dependencies. The more dependent an individual or agency becomes on one pusher or source, the more precarious and vulnerable the situation becomes.

Brittleness increases, resiliency plummets. A healthy market is built by rising demand from millions of investors--a broad foundation. It is built on rising revenues, not just on heavily gamed "pro forma" earnings goosed by the dollar's decline (all those sales in euros look fat indeed when converted into dollars).

The present market is more like an inverted pyramid: a single source of "demand," the Fed, and months of declining volume.

As dependency on the sole source rises, then the addict (in this case, the stock market) clings ever tighter to the pusher; the addict becomes increasingly volatile, demanding and resentful: give me more crack cocaine (POMO) or I'm gonna die!

The pusher (The Fed) is now in a fix (pun intended). The junkie (the equities market) is now so dependent on the Fed's smack that if the Fed even eases up on the dosage the junkie may well expire.

This is the destructive nature of dependence. Welfare of the common sort and corporate welfare share this core trait: the dependency is "easy" and soon enough resilience, adaptability and drive all diminish, replaced with resentful demands for "more" (everything becomes a "right") and gaming the system to increase the flow of funding (40,000 lobbyists and billions in campaign contributions).

In corporate welfare, then corporate funds are lavished on politicos and lobbyists which effectively buy the firm an increasing share of "Federal entrepreneurship."

As the corporation becomes ever more dependent on Federal largesse and contracts, its resilience and adaptability wither; soon, it is totally dependent on Medicare or the Pentagon and thus on its political allies and lobbyists. Its ability to compete in the real world has been lost; like the junkie, it is one "fix" away from devolution.

The illusion that the Fed is "not propping up the market" is wearing a bit thin. If organic demand were truly strong, then volume would have been rising along with prices. Instead, it has been falling. How can the market be skyrocketing as investors are pulling tens of billions out of the game?

It seems the market has taken to wearing long sleeve shirts to hide the Fed's tracks (needle marks). The fixes keep getting stronger just to maintain the high, and the junkie has stopped eating real food.

Pity the poor addict; one day, the addict will collapse in a heap, and so too will the Fed-dependent market.