So the House of Representatives changes hands; what's different? Beneath the media frenzy: not much.

A "throw the bums out" mid-term election left more than a few bums untouched, but the corporate-financed Republicrats did manage to wrest the House of Representatives from the investment bank-greased palms of the Demopublicans.

(Note to Nevada: did the popping of the Las Vegas real estate bubble so dispirit you that you couldn't even rouse yourself to kick the twitching carcass of Harry Reid off the back of the pickup truck?)

Speaking of twitching carcasses, let's proceed with our post-election postmortem.

1. The Republicrats want to roll back Obamacare. So the fraud-riddled, incomprehensibly complicated, out-of-control Obamacare that absorbs 20% of the nation's GDP like a black hole will be jettisoned in favor of the previous fraud-riddled, incomprehensibly complicated, out-of-control sickcare "system" (and I use the word loosely) that absorbed 20% of the nation's GDP, twice the per capita cost of other advanced post-industrial nations such as Japan and Germany.

Can you spell "competitive disadvantage"? Squandering 10% of our GDP on "defensive medicine" tests, meds, procedures and other sickcare is the equivalent of a 10% VAT tax (value-added tax) on the entire U.S. economy.

Do the Republicrats have any Grand Plan to actually revolutionize sickcare, pre-Obama or otherwise? No. Their "plan" is to channel 20+% of the GDP to the same sickcare cartels which ruled the roost pre-Obamacare and post-Obamacare.

Please excuse my lack of enthusiasm for a return to insurance companies, Big Pharma et al. skimming 20% off the top of the economy while the health of the citizenry measurably declines every year.

Welcome to heck, America. Your "healthcare" is the "plan" of choice here in Heck. The Devil is a huge fan of your "system."

2. The political class will continue blaming China for its own excesses and appalling avoidance of responsibility. Let's see how the scapegoating works when China's stupendous credit/real estate bubble pops. 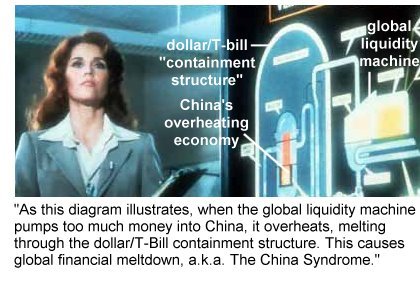 Blaming others is a time-honored dodge, but does it actually solve any problems? Isn't that what adulthood is about, accepting responsibility? (Note to incoming Republicrats: strong economies have strong currencies, weak economies have weak currencies. Allowing the Fed to crush the U.S. dollar is not a pathway to a robust economy.)

3. The Republicrats want to reduce the Federal deficit but they are terrified of losing support should they call Americans on their grotesque hypocrisy. Slash deficit spending, but leave my entitlements and fiefdom alone.

That is another feature here in Heck: permanent adolescence, where everyone is throwing a pathetic, spoiled-brat tantrum: that they "earned" their entitlement and their share if the swag. So calls to reduce Central State expropriation boil down to internecine conflict between protected fiefdoms (a favorite Survival+ term), i.e. cut the other guys' swag but leave my "deserved" swag untouched.

So after an appropriately earnest speech or two about "fiscal responsibility," (hahahahaha, to quote the Mogambo Guru), the Republicrats will cave and pick up their old habits of borrow-and-spend.

Adjustments will be made, of course; those leeching "99ers" collecting unemployment will be axed, and we'll appropriate those billions to the wonderfully supportive government of Pakistan, which can't do enough to further our goal of establishing a friendly "government" (and I use the term loosely) in Afghanistan. 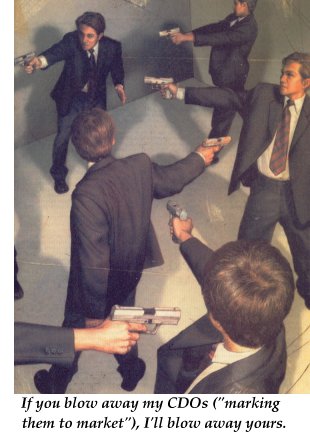 4. The SEC, Treasury and the Federal Reserve will keep the shadow banking system of off-balance sheet "assets" and other trickery intact, lest their beloved "too big to fail" banks encounter a spot of bother.

5. The Federal Reserve's zero-interest-rate policy will continue backfiring. Only the wealthy benefit from rising financial assets, as average Americans take on more debt and grow poorer. Worse, risky speculation is again being rewarded. If you doubt this, just look at the U.S. stock market.

The heart of the Federal Reserve's policy to extricate the nation from the lasting grip of a deep recession is in essence a variation of what's known as "trickle down economics." The government aims to boost the net income of the wealthiest Americans, so that as these top earners spend, their wealth will "trickle down" to average Americans via service and production jobs.

As we all know, that's worked astonishingly well the last two years, if you ignore the decline in household income.

6. The Global Empire will continue, untouched by inconsequential political posturing in the home country.

7. Those who profited so immensely from the systemic fraud and embezzlement at the heart of the financial crisis/credit bubble/mortgage-MBS debacle will remain free to enjoy their ill-gotten gains. Republicrats are "tough on crime" only if you're dealing drugs; if you've skimmed hundreds of millions of dollars, then they're your good buddies as long as you share the spoils with them via campaign contributions. In other words, in terms of law enforcement, Republicrats are hypocrites. The Demopublicans wouldn't dare proscute their Power Elite banking/mortgage pals, and neither will the Republicrats.

8. Systemic risk will continue to be mispriced or shoved under the carpet via "extend and pretend." I've asked three experts from Japan to pantomime how well this non-strategy works: 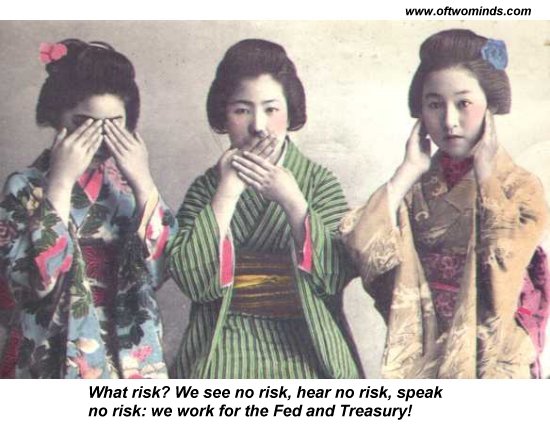 If you would like to post a comment where others can read it, please go to DailyJava.net, (registering only takes a moment), select Of Two Minds-Charles Smith, and then go to The daily topic. To see other readers recent comments, go to New Posts.