The World Is Drowning in Debt, and Europe Laces On Concrete Boots   (November 14, 2011)

The world's major economies are drowning in debt--Europe, the U.S., Japan, China. We all know the U.S. has tried to save its drowning economy by bailing out the parasite which is dragging it to Davy Jones Locker--the banking/financial sector-- and by borrowing and squandering $6 trillion in new Federal debt and buying toxic debt with $2 trillion whisked into existance on the Federal Reserve's balance sheet.

It has failed, of course, and the economy is once again slipping beneath the waves while Ben Bernanke and the politico lackeys join in a Keynesian-monetary cargo-cult chant: Humba-humba, bunga-bunga. Their hubris doesn't allow them to confess their magic has failed, and rather than let their power be wrenched away, they will let the flailing U.S. economy drown.

Europe has managed to top this hubris-drenched cargo-cult policy--no mean feat. First, it has indebted itself to a breathtaking degree, on every level: sovereign, corporate and private: 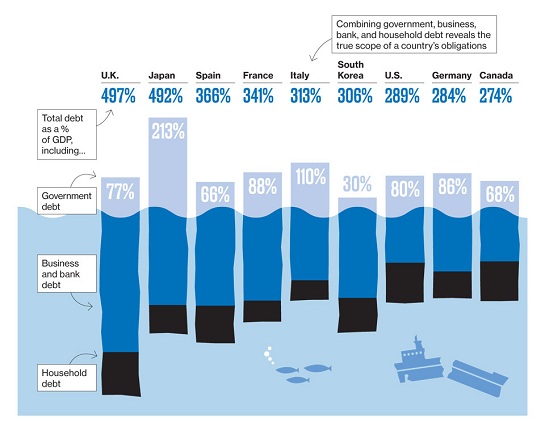 Germany, the mighty engine which is supposed to pull the $16 trillion drowning European economy out of the water, is as indebted as the flailing U.S.

Second, the euro's handlers have already sunk staggering sums into hopelessly insolvent debtor nations, for example, Greece, which has 355 billion euros of outstanding sovereign debt and an economy with a GDP around 200 billion euros (though it's contracting so rapidly nobody can even guess the actual size). According to BusinessWeek, the E.U. (European Union), the ECB (European Central Bank) and the IMF (International Monetary Fund) own about $127 billion of this debt.

Since the ECB is not allowed to "print money," the amount of cash available to buy depreciating bonds is limited. The handlers now own over 35% of the official debt (recall that doesn't include corporate or private debt), which they grandly refuse to accept is now worth less than the purchase price. (The market price of Greek bonds has cratered by 42% just since July. Isn't hubris a wonderful foundation for policy?)

In other words, they have not just put on concrete boots, they've laced them up and tied a big knot. We cannot possibly drown, they proclaim; we are too big, too heavy, too powerful. We refuse to accept that all these trillions of euros in debt are now worth a pittance of their face value.

When you're drowning in debt, the only solution is to write off the debt and drain the pool. The problem is, of course, that all this impaired debt is somebody else's asset, and that somebody is either rich and powerful or politically powerful, for example, a union pension fund.

Third, the euro's handlers have set up a circular firing squad. Since the entire banking sector is insolvent, the handlers are demanding that banks raise capital. Since only the ECB is insane enough to put good money after bad, the banks cannot raise capital on the private market, so their only way to raise cash is to sell assets--such as rapidly depreciating sovereign-debt bonds.

This pushes the price of those bonds even lower, as supply (sellers) completely overwhelm demand from buyers (the unflinching ECB and its proxies).

Voila, a circular firing squad, where the "bulletproof" ECB is left as the only buyer who will hold depreciating bonds longer than a few hours, and all the participants gain by selling bonds before they fall any further. This is the classic positive feedback loop, where selling lowers the value of remaining assets and that drives further selling.

As many have noted, soaking up all the Greek debt--a mere sliver of the eurozone's impaired debt-- would essentially wipe out the entire EFSF "stability" rescue fund.

The "solution" to the cargo-cult crowd is "obvious"--print, baby, print, and use that new paper to buy 3 trillion in mostly-worthless bonds. But that is just another circular firing squad, as Nobel prize winning economist Thomas Sargent noted: "There's a fundamental truth that everyone has to understand: what the government spends, the public will pay for sooner or later, whether in taxes or inflation or having their debt defaulted on." (Source: BusinessWeek 11/20/11)

The 3 trillion euros comes of somebody's pocket, one way or the other; there is no free lunch.

Even worse, debt is the only engine of "growth" left in the developed world. This chart shows how America's "growth" since 1980 has been fueled by debt that expanded by 136% ($30 trillion) beyond actual economic growth. The same is also true of Europe, where Italy, for example, borrowed 1 trillion euros over the past decade or so in return for essentially zero growth.

This reveals the key dynamic of the past decade: the diminishing productivity of debt. What happens when an economy is so burdened by the friction of inefficiency and indebtedness that borrowing a trillion euros just keeps the economy barely above water? The next trillion won't even keep "growth" at zero, and the economy sinks beneath the waves. 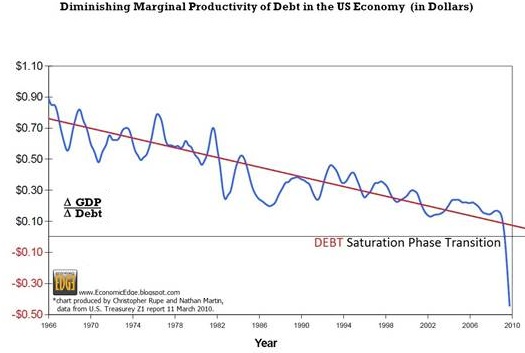 The world has reached the point of debt saturation. Creating more debt no longer generates "free lunch" growth, even in China, though the central bank in China is still playing as if shifting debt off-balance sheet into a "shadow" system will fool the money gods. It won't.

Everybody in Europe is playing the same sort of games, hoping to fool the money gods and keep the "free lunch" economy "growing." While everybody focuses on the circular firing squad in Italy, untold billions of euros of impaired private mortgage debt in housing-bubble-popped Spain still sits on the books of Spanish banks at full value, lest a sneeze of reality send Spain's entire banking sector to Davy Jones Locker.

Though no official publicly admits it, nobody really knows how much debt there is in Greece, or who even holds it. Here's the fig leaf confession: "Scarce data makes estimates difficult." Yes, I'm sure it does. So the true size of Europe's debt is unknown because everyone with a stake in the charade is trying desperately to keep the true scope hidden. (Ditto in China.)

The debt will get renounced, and debt as the "engine of growth" will also be renounced.

Europe is an inept 3-card monte player attempting to swindle the money gods. The gods aren't fooled by such shallow shuffling games, in fact they are greatly annoyed that humans even dare to attempt such flimsy tricks. Their wrath is building, and human hubris will only make the reckoning worse.

My "On the Edge" interview with Max Keiser is now online. Fortunately for me, Max keeps the ball rolling and succinctly summarizes my rambling. Good fun in Paris--thank you, Max and Stacy, for the opportunity to spend some time with you.