A Glimpse Into the Future of the Stock Market and Dollar
(November 26, 2011)


The "accident" many have been waiting for has finally happened, and it's called Europe. That doesn't bode well for the U.S. stock market.

A lot of technical analysts and financial pundits are expecting a standard-issue Santa Claus Rally once a "solution" to Europe's debt crisis magically appears. There will be no such magical solution for the simple reason the problems are intrinsic to the euro, the Eurozone's immense debts and the structure of the E.U. itself.

We can fruitfully start a speculative look into the future of the U.S. stock market and dollar with a quote from John Mauldin's book Endgame: The End of the Debt Supercycle and How It Changes Everything:

Economic theory tells us that it is precisely the fickle nature of confidence, including its dependence on the publics expectation of future events, which makes it so difficult to predict the timing of debt crises. High debt levels lead, in many mathematical economics models, to multiple equilibria in which the debt level might be sustained or might not be.

Economists do not have a terribly good idea of what kinds of events shift confidence and of how to concretely assess confidence vulnerability. What one does see, again and again, in the history of financial crises is that when an accident is waiting to happen, it eventually does. When countries become too deeply indebted, they are headed for trouble. When debt-fueled asset price explosions seem too good to be true, they probably are. But the exact timing can be very difficult to guess, and a crisis that seems imminent can sometimes take years to ignite.

The accident has finally happened, and it's called the euro/European debt crisis. I see a lot of analysts trying to torture a Bullish interpretation out of the charts, so let's take a "nothing fancy" chart of the broad-based S&P 500 with five basic TA tools: Bollinger Bands to measure volatility, relative strength (RSI), MACD (moving average convergence-divergence), stochastics and volume. 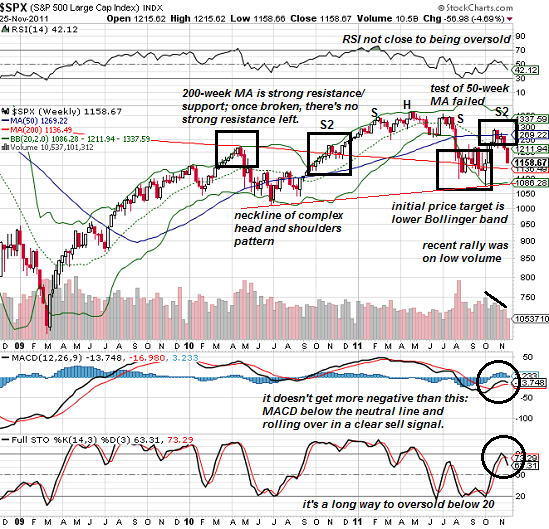 If we use Technical Analysis 101 (basic version), a number of things quickly pop out of this chart--and none of them are remotely bullish.

1. This market is not even close to being oversold. Bulls are hoping that the selloff has created an extreme of negative sentiment, which would be a reliable indicator that the market is about to rally. But there is no evidence of such an extreme, and the VIX/VXO (not shown) is also not at an extreme.

Rather than an extreme of negative sentiment, we see complacency, and a long way down to reach extremes in RSI and stochastics.

2. The 200-week moving average (MA) has offered picture-perfect resistance and support. The entire August-September period of wild swings of volatility can be seen here as a struggle around the 200-week MA.

In a classic retracement, the SPX shot up and recovered the 50-week MA, but failed to hold that level. Now it is heading back down for another retest of the 200-week MA. Only this time the chart is significantly weaker than in September, and the low-volume "oversold/hopium" rally in October was technically underwhelming.

3. Another clue that supports the notion that the 200-week MA will fail to hold this next text is the beautiful (to technicians) complex head-and-shoulders pattern which is made up of a shallow HS triple top formed from March to August of this year, and a second outer left shoulder formed in November of 2010.

The corresponding right shoulder was traced by the October rally that just rolled over. This completes a long-term head and shoulders topping pattern.

4. The MACD is extremely negative, being well below the neutral line and rolling over into a bearish cross. Coincidentally, the stochastics also rolled over in a bearish cross.

If price does fall to the lower band, we can anticipate an oversold rally back up to the 200-week MA, followed by a renewed plunge to new lows.

An insightful technical analyst who prefers to be known only as "Chartist Friend from Pittsburgh" shared two very long-term charts of the Dow Jones Industrial Average (DJIA) and the U.S. dollar. As I have noted here many times, the current era has seen the DJIA and the dollar on a see-saw, meaning a falling dollar has corresponded to a rising stock market, and voce versa.

These charts are remarkably self-explanatory: 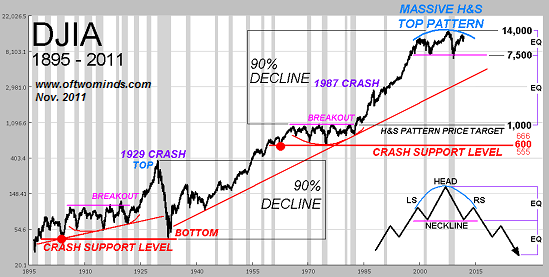 The implications of this chart are not exactly Bullish, as it targets a long-term bottom between 1,000 and 600.

Turning to the U.S. dollar, our Chartist Friend observed, The monster decade long head & shoulders on the DJIA is well documented, but I have yet to see anyone other than myself make a connection between the DXY mid-90's bottom and the bottom that it is forming today." 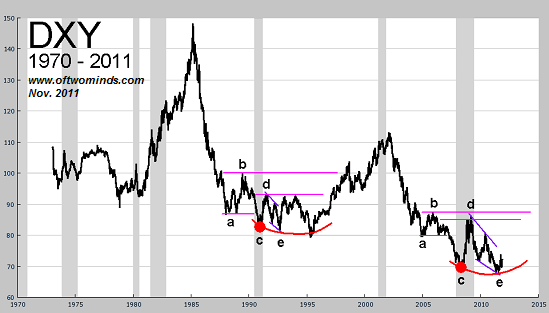 Our Chartist Friend from Pittsburgh has noted how a classic 5-point pattern may be repeating, which targets the 86-88 level in the DXY near-term. Longer term, this chart suggests a rally of much greater duration and vigor than most analysts dare extrapolate in the current dollar-Bearish climate.

Thank you, Chartist Friend from Pittsburgh, for sharing these charts.