When 86% of Americans have a chronic lifestyle illness, then the national security of the nation is at risk.

One obvious threat to national security that is never mentioned by the Pentagon, the C.I.A., the Mainstream Media or anyone else: systemic chronic ill-health resulting directly from "lifestyle" choices of diet and fitness. Lest you think this an exaggeration of some fanatical "health nut" (I would reject that classification, by the way, as I consider myself entirely reasonable), then please read this lengthy report on another great nation's looming "national security" problem: widespread chronic ill health in China. (The article is behind a paywall, but you may be able to borrow the issue from your local library. I highly recommend reading it somewhere, somehow.)

The essay traces out the devolution of China's once-universal if basic healthcare system for all into a U.S.-type system of full coverage for Elites and a more brutal one for everyone else: if you don't have the cash to pay for care, you die.

Ifyou think this is an exaggeration, you need better local sources on the ground in China.

China has the largest population of diabetics and pre-diabetics in the world. China's diabetes rate has skyrocketed to 11% of the adult population, slightly higher than that of the U.S., while its rates of other non-communicable "lifestyle" diseases such as heart disease have also soared to U.S. levels.

The number of people who are addicted to tobacco is also very high in China, as tobacco is a key revenue generator for the Central Government.

Pollution levels in the air and water are high throughout much of China, and efforts to clean up industrial waste and improve air and water quality are fitful and uneven, as economic growth trumps every other concern.

The U.S. may have fewer industrialization-related health issues, but it has crushing, seemingly intractable lifestyle-related health issues: 86% of Workers Are Obese or Have Other Health Issue Just 1 in 7 U.S. workers is of normal weight without a chronic health problem.

If you don't think chronic ill-health is a threat to national security, please read on, starting with this slideshow map of the U.S. which depicts the obesity epidemic on a state-by-state basis: 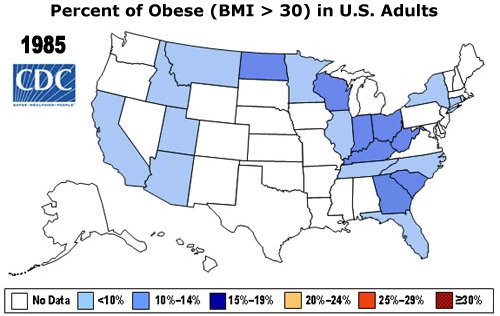 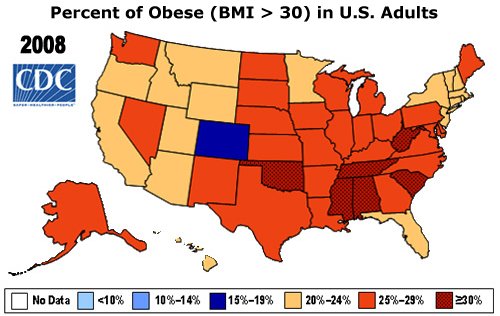 The cost of treating heart disease and stroke in the United States is expected to triple in the next 20 years, to $818 billion, a new report says.

To curb this rise in costs, the panel said that "effective prevention strategies a re needed if we are to limit the growing burden of cardiovascular disease."

American Heart Association CEO Nancy Brown said in a news release that "unhealthy behaviors and unhealthy environments have contributed to a tidal wave of risk factors among many Americans. Early intervention and evidence-based public policies are absolute musts to significantly reduce alarming rates of obesity, hypertension, tobacco use and cholesterol levels."

Right now, 36.9 percent of Americans have some type of heart disease, including high blood pressure, coronary heart disease, heart failure, stroke and other conditions. By 2030, that number will rise to 40.5 percent of the population, or about 116 million people, according to the report.

The central tenet of the Survival+ critique is that no problem can even begin to be solved without an integrated understanding of the interlocking chains of causality which create the problem.

In the U.S., healthcare costs are exploding for a number of powerful reasons, but the most important one is the deterioration of the citizens' health which can be causally traced to the nation's deteriorating food supply, diet, nutrition and fitness--all integrated parts of a massively unhealthy lifestyle.

While we don't know everything about human health, of course, we do know that extra weight (obesity) and lack of exercise are causally linked to a number of interlinked chronic diseases, all of which lead to early death (Diabetes, high blood pressure, heart disease, cancer, etc.).

The problem is global:

( Calculate Your Own Body Mass Index.)

The U.S. "sickcare" system is perverse enough and costly enough to bankrupt the nation and lay waste to the health of the citizenry. Here is my depiction of the entire sickcare system, which includes diet, the food cartel, an obsession with convenience, and a system that profits from chronic illness rather than health:

Here's the simple truth: garbage in, garbage out. Eating garbage food can only generate chronic ill-health.

Here's another simple truth: the human body's insulin system breaks down if the body is sedentary. Humans have been selected to eat a variety of foods and be very active, walking, running and trotting great distances, harvesting scattered food sources, and hunting game by basically running many of them to exhaustion.

Once we stop being active to the point that we no longer stress our muscles and bones, we start falling apart, and no pill can stop that degradation.

Granted, it's horribly inconvenient to prepare real food and maintain some modest level of fitness; we might even sweat (ugh) or feel some sort of minor temporary discomfort.

Here is the Army Physical Fitness Test, which lists three basic tests for strength and endurance: situps, pushups and a 2-mile run, broken down into age and male/female categories.

You must score at least a 50 in each event in order to graduate Basic Combat Training. Active Duty soldiers need to score at least 60 to pass the APFT.

NOTE: do not attempt the tests if you are out of shape, in poor health, etc.

I am 57 years old and I can pass this test without doing anything more than I do already. I am not a marathon runner, nor do I work out at a gym; I have what is called "an active lifestyle" of the sort that was once considered fairly typical. I am not a natural athlete, i.e. I sweated blood to get on high school sports teams as a benchwarmer.

Based on the number of push-ups and sit-ups I can do in a minute, my score is 61 and 62, meaning I am fit for active duty in the U.S. Army as a 37 to 41-year old male. I confess to running a couple of kilometers occasionally, and using a bicycle whenever possible as my mode of transport. These are enjoyable activities to me, and the sacrifice isn't pursing them, it's being deprived of them.

I mention this not to claim extraordinary accomplishment, but rather to say this test isn't that arduous, and anyone under 50 should be able to pass it once they start eating a real-food diet and slowly work their way up to a modest level of fitness. The very fact that most Americans will reject this as "impossible" shows how out of sync we are with a healthy lifestyle and a modest level of fitness.

I happened to see a video clip recently of an American farmer in the southeast discussing why native-born Americans don't last more than a few hours working on his farm. His comment was memorable and sobering: "Americans just aren't durable."

Can chronic ill-health bring down a once-great nation? yes it can, and yes it will. We as a nation are going to have to get durable again, or our chronic ill-health will bankrupt the nation and cripple our key rights: life, liberty and the pursuit of happiness.

Improving Americans' Health, With or Without Health Care Reform

This Nation's Devolution from Quality to Convenience (January 4, 2010)

Here are two documentaries you need to see: Borrow, rent, or buy, whatever it takes, but see these:

And two more which directly address the fast food industry: