We hear a lot these days about the middle-class-- Middle-class tax breaks, etc. But what exactly constitutes "middle-class"? The usual definitions are income-based, as in "between $45,000 and $125,000."

I submit that since income-based definitions do not actually address either asset accumulation or purchasing power, they are a priori of no value. Instead, I propose the following definition of middle-class based on what the income can accomplish/buy:

1. No more than 30% of net income is spent on housing, either to own or rent.

3. No more than 15% of net income is spent on medical and dental expenses, including insurance.

4. The household can afford to pay tuition, fees and books for two household members living at home and attending a 4-year state university/college.

5. Food (including meals away from home) costs no more than 15% of net income.

6. The household can pay cash for a recent-vintage reliable used vehicle, and can support the one reliable vehicle and a "beater" old vehicle for secondary use; the household carries no auto loans.

7. The household pays off all credit card purchases monthly and carries no consumer credit balance.

8. The household can afford to take a domestic vacation once a year without incurring debt or tapping the 6-8% of income set aside for savings.

9. If the family owns a residence, the equity stands at a minimum of 50% of market value.

By these standards, how many households in the U.S. are truly "middle-class"? Not very many.

Yes, a modest income earned by school teachers, sales managers, production workers, etc. could, with modest spending constraints, easily hit each of these points in that 30-year time frame.

In focusing solely on income, the standard perspective leads to this conclusion: to be middle-class, a household would have to earn $100,000 or more and endure draconian spending limits.

Yes, income of the lower 80% of wage earners has stagnated. But more perniciously, the cost structure of our entire economy has skyrocketed past affordability.

Some analysts point to higher taxes as a major culprit, but since 40% of U.S. households pay no Federal taxes whatsoever, then clearly this is simply not an issue except for the top 20% who pay most of the Federal and state income taxes.

One statistical fact is that income distribution has skewed to the upper-income segment, as illustrated in this graphic:

Rather than attempt a value judgment--is this good or bad?--let's simply accept this as an indisputable feature of post-industrial, globalized America. Here's another look at data for the bottom 20% and the top 20%: 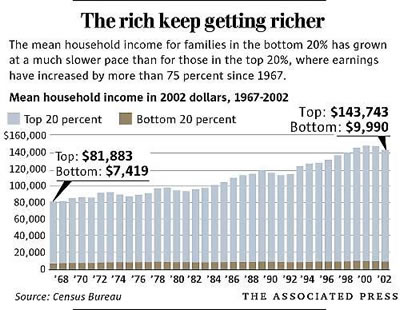 While it is certainly a fair question to ask whether taxes have been sufficiently progressive, the answer is rather unequivocally yes, as the upper eschelons pay literally 90% of all Federal income taxes. (I have sourced this in past entries).

Here's a look at asset distribution: 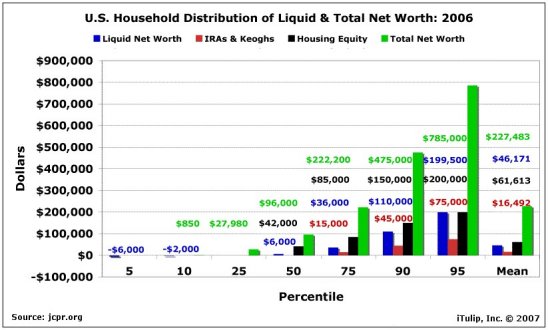 Clearly, most assets are held by the top 20%--not exactly what we'd call "middle-class" as the term seems to imply, well, a middle value, not the top.

And just to remind ourselves that home ownership was not always considered a prerequisite to middle-class membership:

Productivity is inevitably trotted out by "supply-side" tax proponents and various other flavors of ideologues as "the answer" to all economic ills, so let's see how that rising productivity has worked out for the households doing the producing:

But this chart does suggest the real culprit in declining purchasing power: the covert rise in cost structures such as medical expenses. Notice how benefit costs rose handily even as wages stayed flat; employers were paying more labor costs, but the increases weren't flowing to the workers.

Here is the chart which better explains declining purchasing power: a long-term steep climb in the cost structure of everything which cannot be imported from low-cost exporting nations:

Dramatic increases in the inflation-adjusted cost of education, medical care, government, food and transportation have in effect stealthily gutted the purchasing power of formerly middle-class incomes.

The problem isn't just stagnating wages: it's an economy-wide cost structure which has skyrocketed far beyond affordability.

Apologists like to invoke inflation, but these are inflation-adjusted; clearly, costs have risen far faster than inflation.

Other apologists like to claim that medical care is so much better and that's why it costs 10 times as much now. But by any yardstick you select, Americans are not 10 times healthier. In fact by some yardsticks, our health has actually declined despite the stupendous increase in what we spend on medical care.

If an MRI is so bloody rare and costly, then why does it cost 1/20 of the U.S. fee in China when the machine is the exact same? Please don't try to tell me the labor is 1/20--that's simply not true. I happened to visit my doctor at Kaiser Permanente (a non-profit HMO) for a two-year checkup and he mentioned that a friend of his (non-Kaiser member) went into the hospital for some diagnostic work and the bill was $40,000, not counting the doctors' and lab fees which he estimated would double the total.

A routine hospital stay of a few days thus costs two year's pay. Another friend's elderly father went into the hospital for a quick procedure and a few days' observation, and Medicare was billed $120,000-- three year's pay for an average American.

As for the other dominant expense in household budgets--housing--perhaps the current oversupply of housing (18 million vacant dwellings and counting) will eventually bring both market values and thus rents back in line with historical averages: 25% to 30% of net income. There is no reason the house that sold for $500,000 in 2006 should stop declining in value at $300,000; if there is no demand at $300,000, then it can drop to $100,000. At that cost structure, landlords can lower rents by half and still make a tidy profit.

In other words: perhaps our declining purchasing power stems not so much from flat wages as from a skyrocketing cost structure in everything not exposed to non-U.S. competition. It's difficult to examine the above chart and draw any other conclusion.

Maybe we should focus our attention on lowering cost structures rather than worry solely about flat incomes.


Reader Comments on the Mainstream Media:

Good piece on the demise of the lamestream media, Charles.

Another aspect of the deterioration of print journalism from my small window on it (I worked for nine years at a newspaper in California) was watching the publishing staff change from former editors to former sales managers. When I first started working, publishers were traditionally promoted from a pool of experienced editors. But then, fancy marketing experts were hired with their sophisticated techniques for garnering more and more money from the community, which led to more profits and more status. Then, suddenly, sales managers began to be promoted to the publisher position in the local newspapers. Now, whenever there is a judgment call regarding what to emphasize or what to publish, any controversy is settled by the publisher, who now is from a background in sales, not journalism. The text of the newspaper began to be looked at as what you have room to flow around the ads. No ads, no print. And, God help you if a reporter wants to do a story on what might offend the local chamber of commerce, the Realtors, or any other major advertiser. Ain't gonna happen.

Actually, the former sales managers who are now publishers are usually very good people who are trying to do their best. But the real power behind the throne is the Marketing Director. This is a guy, usually relatively young and just out of business school back East somewhere who comes in like gangbusters with his charts and graphs and computer expertise on how to mine the local businesses out of their "advertising dollars." These "dollars" are based on formulas and statistics that are sold for a fortune by marketing software companies and purchased by the newspaper consortium that runs all the sister associated papers. The Marketing Director trains the sales staff and mandates approaches that are simply ruthless to all concerned, customers as well as sales staff. If you don't go along with the program (literally) you are free to pursue a career in used car sales or assorted service industries. After awhile, the whole emphasis and main thrust of the newspaper is dictated by the sales/marketing department. The poor editors and reporters make about half of what the sales staff makes, if they are lucky, and get almost no respect. They are like Peace Corps workers at an ambassadors party.

I used to love the newspaper business. But now, I look to the internet to stand up for truth in journalism. If the newspapers gave a rats ass about presenting the truth they would not continue to employ the same tired and discredited columnists year after year, no matter how wrong they are. They would look at who has been right in their analysis of politics, economics, health, real estate, etc. on the internet and pick them up in the newspapers - and fire the corporate hacks. Have they done so? Hell no.

So, to hell with the lamestream, both print and television. They are all, with few exceptions, corporate stooges who should be shunned. Sad, but true.

Your piece on blah blah MSM strikes to core of our situation in Detroit. I first noticed it when the Free Press and the Detroit News failed to cover KMart's demise (once the country's largest retailer). They wrote story after stoy about recovery plans while the corrupt managers of the company looted it. The end result? 5,000 people lost their jobs at the comany's headquarters in Troy and the land is now being shopped, with weak trumpets, for "new" development.

Of course, the same thing has happened with the coverage of Ford, GM and Chrysler. Year after year our MSM writes mournful articles about loss of market share and the exciting possibilities of production line effeciencies without ever questioning the stupidity of our corporate leaders. As you say, the cause of this abandonment of useful or thoughtful journalism is advertising. I have a friend who manages an advertising department for the Free Press/News who told me that it was/is impossible for any of the writers to penetrate the veil of insipidty as long as KMart/GM/Ford/Chrysler et al are/were the biggest advertisers in the region.

Another fact that he revealed was that since the casino's came here years ago, advertising by furniture and appliance companies has dropped each year. Why? People gamble away their income or credit lines rather than buy hard assets. But has there ever been any writing about the net economic impact of casinos on our region? No. Any writing is relegated to output about Gamblers Anonymous (liberal perspective) or about growth/decline in gambling revenue (business perspective).

But below the obvious business drivers, I think there is a deeper cause: the shift of our culture in Michigan from a logical left brain culture to an intuitive right brain culture. I can't prove it, but I do know that every recovery plan features a strategy for revitalizing Detroit with creative millenials, a prospect about as likely as GM escaping its final and deserved fate.

Thank you, Charles B. ($50) for your stupendously generous donation to this site. I am greatly honored by your support and readership.