Reader Harry sent me this challenge, which being a Contrarian's Contrarian I am pleased to take up:

I always enjoy your insight. I was wondering if we could turn towards a positive spin on things rather than doom and gloom. Maybe I am being unrealistic, maybe it does not sell readership but Gosh it sure would be nice to go the other way. Our economy is pretty resilient and I know it has problems right now, but if we could change our mindset that might go a long way to reversing some of these charted trends.

Excellent, Harry, thank you. Before we start on the positives I need to cover why I have been unrelentingly skeptical and bearish on housing and the stock market for the past 3 years. (Go check the archives to the left if you want proof.)

Basically, everything that has transpired--the collapse of the housing bubble and the sharp decline in global stock markets--was baked into the extreme excesses in credit, money creation (more or less the same thing), derivatives and virtually every other financial instrument and speculation. Those excesses were doomed to unwind. The longer the excesses ran, the bigger the unwind would have to be.

Neither housing nor global markets have fully unwound. That process will take many more years. Nonetheless nothing goes up or down in a straight line so investors will be rewarded for doing what they have been warned against for decades by various pundits and "experts"--don't try to time the market.

As a contrarian, I beg to differ--you must try to time the market, or actively maintain hedges, lest you wake up one morning some months or years hence and find the Dow Jones Industrials are 3,000 instead of 8,000 and oil is $50 (or $200) per barrel instead of $80.

So let's start the List of Positives with this:

1. We can protect ourselves against declines in paper assets and currencies with hedges.

Frequent contributor Harun I. has repeatedly suggested in these pages that the prudent household/investor attempt to hedge the risks of huge swings of valuation via futures or options contracts. Harun has also provided many charts which depict the relative strength of gold as compared to the stock market. Unsurprisingly, stocks have lost considerable value compared to gold. Thus gold can be viewed as a hedge against paper currencies and other non-tangible assets. Oil (or other tangibles) can also be viewed as a hedge against devaluations in currencies and paper assets.

2. One-third of all U.S. houses are owned free and clear. While the media has now glommed onto the millions of insanely risky mortgages which are in default or otherwise distressed (risks skeptics had long pointed to as highly dangerous), let's not lose sight of the fact that many Americans are frugal and have either low mortgages or no mortgages.

Many of you avoided the housing bubble hype and remained renters or sold in 2005 or 2006 and escaped the carnage. Many like Alberto R. and others have lived frugally and are waiting patiently for housing to bottom, at which point they will be buyers as long-term investors.

In one sense, what is happening is not the bankruptcy of America but the transfer of assets from the spendthrift imprudent to the frugal prudent. Is this a bad thing? I don't think a "good/bad" statement has any meaning here; it is simply a market economy at work. Excesses get unwound, cash is always king, prudent investors tend to be rewarded and gamblers tend to lose all their money.

3. Not everyone speculated in housing or the stock market. Some $6 trillion has been squirreled away in money markets for years. Trillions more are in 401K and IRAs, and though much has been lost in those accounts in this crash, much is in bond funds and precious metals funds.

4. The U.S. has the ability to print trillions of dollars which are still accepted in exchange for goods and services. Now I have never said this is a good thing, as eventually this will drive the value of the dollar to near-zero, but nonetheless in the short-term possessing the global reserve currency which is still used for 2/3 of all global transactions is a powerful advantage. If the U.S. decides to print a few trillion dollars and do an FDIC-type workout of bankrupt/insolvent lenders, it can do so. Will it have negative consequences? Yes, but unwinding excesses leaves us few good choices. Being able to print a couple trillion dollars without sparking immediate hyper-inflation is still better than not having that option. (Note I was adamantly against Paulson's bogus TARP bailout, but would support financial triage along the lines of FDIC workouts.)

5. The vast majority of Americans have running hot water and electricity. These are very good things. As anyone will tell you, having money is more fun than being broke, but if you can cobble together shelter, running water and some grub (beans and rice are still cheap), then life's happinesses are not quite as dependent on constant consumption as marketers would have us believe.

As correspondent Riley T. recently noted:
"Remember getting rich has nothing to do with being happy. I worked all my career with the rich and for the most part they are not very happy and their children are very miserable and seem hopeless."

6. At least until the Federal government itself becomes insolvent, millions of people are getting Social Security and military pension checks. As my father recently noted (he's 82 years old), in the Great Depression nobody received Social Security; now it acts a a safety net not just for individuals but for the economy as a whole.

Millions of veterans receive medical benefits via the VA and millions more (and their spouses) receive disability and pension checks. All of these provide a cushion of spending for the economy.

7. The U.S. still pumps 4.5 million barrels of oil per day. While we're still consuming about 20 MBD, nonetheless it is entirely possible to create an economy which consumes only 4.5 million barrels a day, should we wish to do so and should we collectively make this transition a priority. Will the energy consumption per individual remain as high as it is now? No. Nonetheless a very nice lifestyle with shelter and running water and transportation is possible in a largely solar-powered economy. Will grapes be flown in From Chile? No. Changes will have to be made. But having 4.5 MBD is a lot better than having zero.

8. There are 15 million vacant dwellings in the U.S.. There seems to be plenty of shelter available once the price drops down to market rates.

9. This is still the land of opportunity. Yes, we're all being ripped off by The Powers That Be, our politics and media are corrupt, venal and clueless, and blah blah blah, fill in the blanks with all the other ills we suffer. I do not say this cavalierly but merely in recognition that rights and citizenship are relative concepts with implicit tradeoffs. I like France and China and Japan and Italy and Thailand a lot, but there are tradeoffs to living in each nation. There is no Paradise on this planet, only various sets of tradeoffs.

Immigrants (you know, those people who fight their way through endless paperwork to get green cards and citizenship) still recognize this as a land where you can better yourself via working hard and prudent saving/investing. Unfortunately many native-borns seem to have forgotten this in their rush to a entitlement-based personal ideology.

10. We have the Internet. Want to learn how to lower your blood pressure? It's online (caveat emptor, of course--buyer beware). If you want to learn more about living better, cheaper, smarter, we have astonishing resources available online. That is a stupendous advantage our ancestors did not have.

There are more but I'm tired after a long week and will stop here.

For the sake of disclosure I bought APC (Anadarko Petroleum) stock on Thursday and calls on Friday morning (APC is about $26-27 currently). This is disclosure, NOT advice; please read the HUGE GIANT BIG FAT DISCLAIMER below. My reasoning is simple: APC is now trading at the same level as it did in 2004 when oil was $30/barrel. Oil just bounced off key support I highlighted in September. So there is a divergence (or so it seems to me) which will be settled by either oil falling from $80/barrel to $30/barrel or APC rising in value. This is NOT advice, just disclosure. If oil drops to $50, I could easily lose my bet.

As Jesse Livermore (the legendary trader) noted, a Bull market takes along the fewest possible participants. Just as a wild guess, I would say very few will be taken along should the market explode in a counter-trend rally here.

Here are the charts which I ran in September: 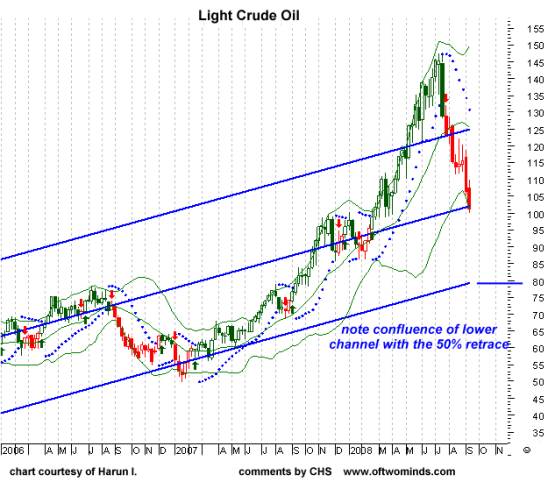 Here I speculate that in the "head-fake" I have long anticipated oil might well fall to the $50 range to complete a "head and shoulders" pattern before it resumes its ascent to $300/barrel and beyond. 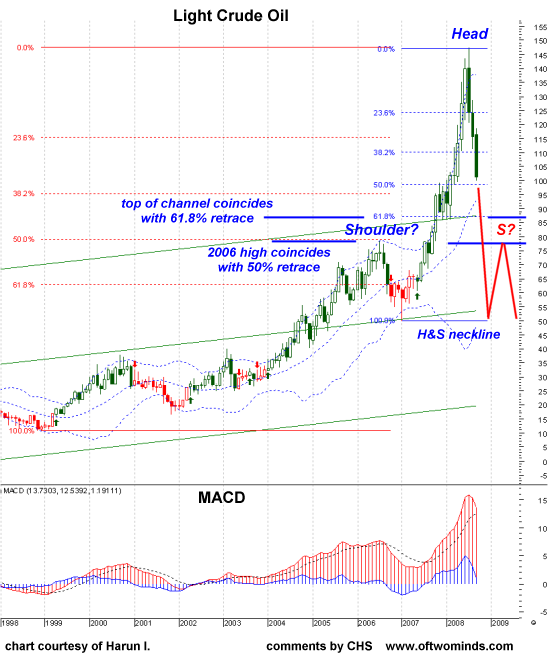 But nothing goes up or down in a straight line and I would guess (GUESS, NOT ADVICE, sorry for shouting) that oil might well retrace to the $105 range or even the $120 area before starting another leg down. Little things like war in Iran, hijacking of oil tankers and Gulf of Mexico hurricanes might exacerbate oil supply concerns and cause huge price swings, regardless of recessionary cuts in demand.

Thank you, Alan H. ($15), for your much-appreciated generous donation to this site. I am greatly honored by your support and readership.