When is "bad news" positive? When it enables us to re-orient our understanding to the proper contexts so we can make informed decisions. The worst thing a doctor can do to a critically ill person is gloss over their condition and offer false reassurances. We need to know the realities to make the decisions which will affect our very survival.

As a followup to Zeus Y.'s analysis of our financial system's legerdemain, frequent contributor Harun I. offers this contextual framework for capitalism (markets only allowed to go up variety), globalization, the loss of purchasing power and what he terms the "exponential expansion of debt" which has acted as the worm-ridden foundation of this decade's bogus "prosperity."

Here is a snapshot of a market which appears to only go up:

"Government owning a stake in any private US company is objectionable to most Americans, me included," Mr Paulson said today.

"Yet, the alternative of leaving businesses and consumers without access to financing is totally unacceptable. When financing isnt available, consumers and businesses shrink their spending, which leads to businesses cutting jobs and even closing up shop."

In the long sad history of contradictions this has to be catapulted to the top of the list. Essentially Paulson is saying that capitalism is good as long as it breathes in -- it must never breathe out.

The alternative he finds so objectionable is the very nature of capitalism. (emphasis added, CHS)

We must remind ourselves of where the crisis originated. Ironically, Paulson, in the second paragraph of the above statement encapsulates the entirety as well as the absurdity of the situation. People and businesses must borrow and spend regardless of their needs at exponentially increasing rates or the system collapses.

Conventional wisdom would have it, incorrectly so, that people trade labor for wages and those wages provide the means through which consumption of necessary and discretionary goods and services is made possible.

Wages haven't remained stagnant for a generation they have effectively declined. This is why it takes two wage earners in a household to accomplish the equivalent of one wage earner 30 years ago.

We have embraced "globalization". It sounds trendy, even cosmopolitan. Economist tell us its the only way. But for some reason we have yet to understand its effects -- and political hacks are not about to spell them out.

Americans have enjoyed a long period of time where our wages were several standard deviations above the rest of the world's. Now that we are forced to compete with people who have a much lower standard of living certain unpleasant things must happen. Our standard of living must decrease as developing nation's standard of living increases. (When a candidate promises to bring back jobs, look him straight in the eye and ask him/her, how can they do this when the competition can work for 1/20th our wages? Then stand back and watch him/her dissemble)

In order for Americans to maintain a high standard of living either asset prices have to lower (purchasing power has to increase), they must have wage and price levels that allow savings, or they must borrow. But this is not possible with the current system. Deflation is viewed as worse than death, especially since so many derivatives are collateralized by extremely overvalued assets. (emphasis added, CHS)

Deflation raises the cost of servicing debt. considering the level of public and private debt this is one of the reasons why all the stops are being pulled out to prevent it. Promoting saving would be to discourage spending (see second paragraph second sentence in the above quote). Rising wages, also a result of deflation, would make us uncompetitive (we already are). This leaves borrowing.

This brings us full circle in this absurd Greek tragedy. Borrowing has a saturation point. We have reached that point both at the private and public level. Because we have an economic system that requires exponential amounts of debt in order to grow, OTC (CDS) derivatives were given legal certainty, unsound mortgage policies were encouraged at the highest level (Alan Greenspan), people were encouraged to equity strip their homes (HELOC) to consume. Wealthy and poor were encourage to live wildly beyond their means in attempts to meet the exponential expansion of debt required to grow. Borrow we must because that is how new money (growth) is created absent real productivity. Therefore, in my opinion, none of what is occurring was or is accidental or incidental.

But as I have stated debt has a saturation point. At the point it takes infinite amounts of credit created instantly for infinity the circumstance is revealed for what it is: a Ponzi scheme, robbery, a fraud, a swindle that transfers wealth from the many to a few. It leads to collectivism. It destroys freedom. It indentures whole nations for many generations to come.

This is what this administration is fighting to preserve.

As others have stated, Paulson wants to solve a debt saturation problem by even greater debt saturation. But Starbucks is not closing 600 stores because it needs more debt. With three or more cars in most driveways across America GM and Ford are not struggling because they need more debt. Entire neighborhoods and high rise buildings have not become foreclosure ghost towns because the owners needed more debt.

In every stated situation it was the over-saturation of debt that brought about demise. The temperature of a liquid cannot be raised above its boiling point no matter how much heat is added, only its vapor can be superheated. Unfortunately money that has vaporized is not useful.

Its time to listen to Thomas Jefferson and tell the banks, NO. America chooses individualism over collectivism.

It is time to demand from our government that we want a real economy and a sound banking system no matter how painful the transition.

Thank you, Harun. With the loss of purchasing power in mind, I leave you with a chart of the Dow Jones Industrial Average and gold which charts how many ounces of gold were required to buy a "share" of the DJIA. Note that at Bear Market bottoms, the ratio is about one-to-one: one ounce of gold will buy one share of the DJIA. For instance, if the DJIA is 3,000, then gold is $3,000/ounce. 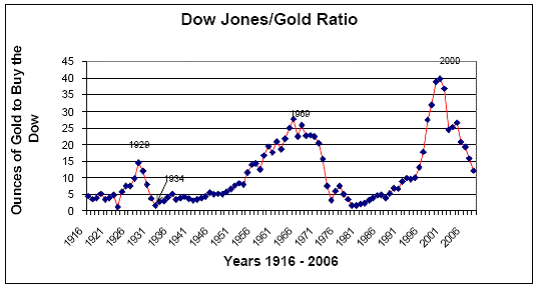 
According to several sources the market for so-called "credit default swaps" last year alone was nearly equal to the total global GDP, around 70 trillion dollars by some estimates. Yet these derivatives have no discernible "origin" or value.


Part IV: There Is Ultimately No Gaming the System: When the Micro Crash Reflects the Macro Crash
(Zeus Y., September 29, 2008)


And for your listening pleasure/amusement: Patriot Express (in disguise) sings Sarah Palin, Queen of the Red party. The lyrics helpfully pop up for your reading pleasure.

Thank you, Cheryl A. ($50), for your many generosities over the years, in money, in books and in stimulating ideas. I am greatly honored by your support and readership.