But first: a brief note on the insane "bailout" bill and the coming Depression: if you're squeamish, please stop reading.

Today I saw a deranged woman squat down and urinate in front of an ATM machine. I averted my eyes out of common decency but heard her muttering darkly before, during and after the act.

On Sunday I was accosted by two women on bicycles, begging for money to get to a suburban town. The bicycles looked too new to evince poverty, or they were freshly stolen; unable to tell where truth lay in such ambiguous circumstances, I demurred and the pair went off to find a new mark.

Lately there has been a rash of shootings of suspects by police officers. My cousin and friends are cops, so I see it from their point of view--suspects fleeing, reaching into their pants for something....as the Bob Marley song has it, "reflexes got the better of me" and all too often the suspect was indeed going for heat. Dumb, tragic, stupid, insert your own adjective; the point is that an increasing number of people are pursuing criminal activities while armed and therefore dangerous.

There has also been a rash of blatant street robberies. Though no tent cities have sprung up locally, that is to be expected as there is no land available in a dense urban environment for a tent city; those are suburban phenomena. Maybe there is one near you, springing up even as our elected officials bail out the bankers and speculators, bleating "panic panic panic" to force our hands.

My neighbor told me she visited friends on the weekend who are thinking of walking away from their home of three years; yes, they paid too much, blah blah blah. Nonetheless, dreams die hard.

Everywhere around me I see desperation, deranged individuals, criminal intent and a carelessness indicative of societal derangement. The question comes to mind: what else of value could we do with $700 billion, other than bail out Crony Capitalism with a Capital C? How about treating the thousands of deranged wandering our streets? How about 100 major solar-power plants? How about starting to rebuild 1,000 frail bridges and our failing electrical grid?

But no, instead we are borrowing $700 billion from our children and grandchildren to bail out bankers and gamblers who gambled and lost. No jobs will be created, though a few high-paying ones will be saved temporarily. No deranged will be taken off the streets, no solar power plants built, no bridges reconstructed--nothing of any real value will be done with this $700 billion except Crony Capitalism and a banking kleptocracy will be saved from its own self-induced destruction.

Think about it and then email your senators, who are poised to ruin the nation under unceasing pressure from an incompetent president and a crony-capitalist par excellence Treasury secretary and his lapdog Fed chairman. If "this sucker is going down," it is richly deserved.

Note to Senate Democrats: larding the bailout with pork spending and tax credits the nation can ill-afford merely multiplies its pernicious effects. You're still borrowing money from our children to give to wastrels and spendthrifts now--not only unwise but unconscionable.


A number of readers have asked for some downside targets for the U.S. stock market. Your wish is my command. The short answer is: a 33% haircut is entirely feasible.

As usual, I asked frequent contributor Harun I. for assistance with the charts, and also as usual the comments/interpretations are mine; these are NOT investment advice: please read the HUGE GIANT BIG FAT DISCLAIMER below.

I don't give advice here, but I will report that I told my sister to sell sell sell all the stock and bond mutual funds in her 401K now, immediately, and get everything into gold funds or cash. That is not advice, just a report of my opinion to my family members. 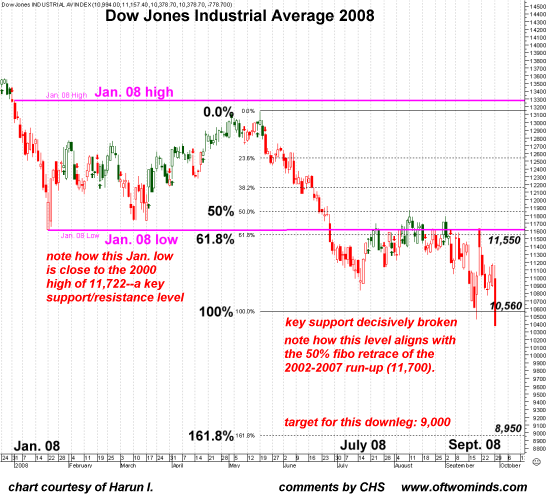 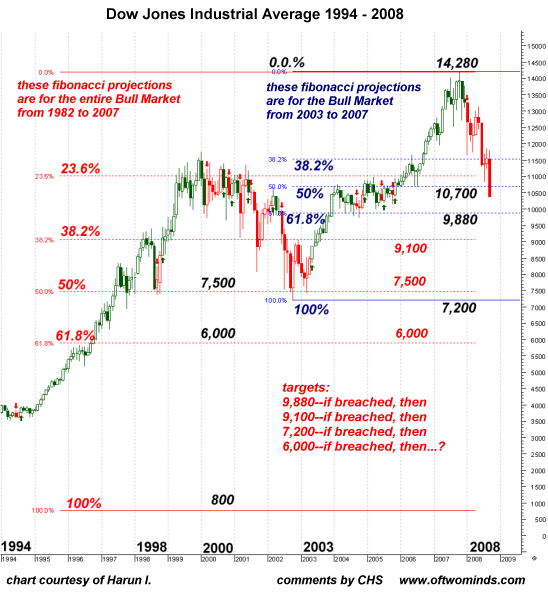 We do not need to be technical-analysis wizards to note the correlation of various support/resistance levels and the basic fibonacci projections.

The January 2000 high of 11,722 is a key support/resistance. Now that the DJIA has busted decisively through that, and failed to close decisively above it despite numerous tries, then the next line in the sand is around 10,700, which also happens to correspond closely with the January 2008 low.

As I type the cheerleaders, PPT and Bulls are making a valiant if doomed effort to rally the faithful for one more assault on 10,700. If they fail--and the odds certainly favor a decimation of all those foolish enough to "banzai" charge that height--then the next intermediate target is around 9,900, just below the "magic" number of 10,000.

The media and traders alike are drawn to round numbers, so some defense of 10,000 should be expected. But if that fails, then the next target is around 9,000: a projection noted on both short-term and long-term charts.

Below that, 6,000 beckons, and below that, well, the "impossible" target of 800, with a potential way station around 3,000, a once-impossible goal for market Bulls which was finally surmounted in 1992, at the start of the glorious 1990s Bull Run.

Louise Yamada and other long-term chartists have long pointed out that at real market bottoms, gold and the DJIA are in rough correspondence. Thus should DJIA 6,000 be the bottom, then we can anticipate gold also being about $6,000/ounce. Perhaps more likely in a deflationary era would be 3,000 DJIA and $3,000/oz gold. 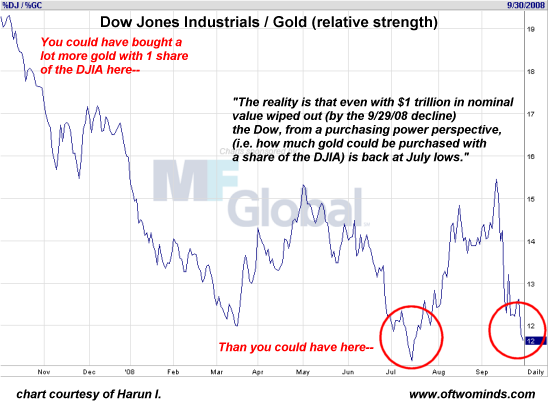 Harun reminds us with this chart of the DJIA and gold that the DJIA or indeed any stock market is only a relative measure of value and purchasing power; the more accurate measures of purchasing power are gold and oil. Thus we see in the following charts that relative to gold, the DJIA has already dropped to the July lows in terms of the amount of gold a share of the DJIA could buy.

If we look at the S&P 500 and gasoline, we see that even selling during the mini-"crash" of 9/29/08, you could have bought more gasoline with a share of the SPX than if you'd sold at the July low. 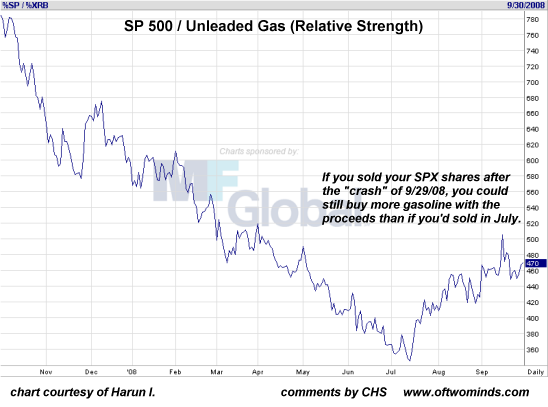 This reminds us that the market is a poor metric with which to measure our purchasing power; should the dollar drop in half and oil double in cost, then a return of the DJIA to 14,000 would not signify a return of purchasing power wealth; it would undoubtedly be touted in the cheerleading MSM as a great victory but it would actually mask a catastrophic decline in actual buying power.

Thank you, Harun, for these charts and insights.

Thank you, Riley T. ($50), for your stupendously generous donation to this site, and for your wry, witty skepticism of received wisdom and human nature.