The system for financing mortgages and regulating that financing has failed, completely and utterly. The mortgage and real estate markets are now in collapse.

Yesterday I wrote about how positive feedback loops lead to collapse. Welcome to the U.S. housing and mortgage markets. As I have documented here numerous times, the entire U.S. mortgage market has already been socialized: 99% of all mortgages are backed by the three FFFs--Fannie, Freddie and FHA--and the Federal Reserve has purchased a staggering $1.2 trillion in mortgage-backed assets in the past year or so to maintain the illusion that there is a market for mortgage-backed securities.

But then the private owners and managers of the "too big to fail" banks would not be reaping hundreds of billions in profits and bonuses. And since the banking industry has effectively captured the processes of governance (that is, Congress and the various regulatory agencies), then what we have is a system of private ownership of the revenue and profits generated by the mortgage industry and public absorption of the risks and losses.

Could anything be sweeter for the big banks? No.

The incestuous nature of the system is breathtaking. The Fed creates the credit which enables the mortgages, the Treasury guarantees the mortgages via Fannie, Freddie and FHA, the Fed buys the mortgages ($1.3 trillion in mortgages are on their balance sheet) and the private banks collect the fees and profits.

One of the core tenets of the Survival+ critique is the State/Financial Plutocracy partnership. There are many examples of this partnership (crony capitalism in which the State is the "enforcer" which collects the national income and distributes it to its private-sector cronies), but perhaps none so blatant and pure as the mortgage/banking sector.

But now the entire legal basis for that privatized-profits, socialized losses system has dissolved. The foreclosure scandal is not just a "scandal" in which various frauds were brought to light; it is the failure of the entire system of originating mortgages that props up the entire real estate market.

I recently reported on the depth of the crisis for AOL's Daily Finance: The Foreclosure Crisis: Eroding Trust -- and Ending the Recovery?

The Mainstream Financial Media has been forced to gingerly poke around the delicate topic, and surprise, it is difficult to put a positive spin on the crisis:

"Title companies would be crazy to ensure title on anything remotely associated with a foreclosed property because we don't know how this is going to resolve itself," said Mark Hanson, an independent housing analyst in Menlo Park, Calif.

The result: Not only could sales slow on foreclosures now listed for sale, but it could also become harder to sell or refinance properties that have been foreclosed upon at some point in the past few years.

Real-estate agents are particularly worried about the situation's impact on investors, the buyers who fix up foreclosed homes for resale. Investors accounted for 21% of all home sales in August, according to the National Association of Realtors.

Success in challenging MERS role in a foreclosure could mean the owner of a mortgage holds a loan without claim to the house as collateral, Mr. Weissman said. That result could set off a chain reaction reducing the value of mortgage servicing rights, an asset many banks keep as an investment.

Are We Headed for Housing Armageddon?

1. The banks which depend on revenues collected from mortgage servicing are facing the possibility that millions of distressed mortgages will enter legal limbo and not be paid; additionally, millions of underwater homeowners realize they can stop paying their mortgages with no near-term consequence because the foreclosure system is frozen.

If you doubt this, please read Gonzalo Lira On The Coming Middle-Class Anarchy.

2. The mortgages which the banks are holding on their books as income-producing assets at full face value are in effect either worthless or depreciated to some significant but unknown degree. If this fact were reflected in their balance sheets, all the big banks would all be insolvent.

3. Evictions based on foreclosures can be halted, delayed or even cancelled. Consider this alternative response to wrongful eviction: Evicted Family Breaks Into Their Former House (WSJ.com)

4. Pending sales of properties that were foreclosed are now of dubious legality.

5. Anyone buying a house in foreclosure, or a house that was foreclosed, cannot get title insurance.

6. Investors who have been propping up the housing market by snapping up properties in foreclosure (REOs or "distressed properties") face high risks and uncertainties in buying any real estate that was in or is in the foreclosure pipeline. That means markets will lose 30% to 50% of their buyers.

7. Buyers who closed on foreclosed homes now face legal challenges to their ownership and potentially even "clawback" of the property as the previous owner can claim he/she was defrauded by a flawed/defective foreclosure process.

Anyone who thinks this is all trivial technicalities is wrong.

9. The real estate market will collapse as the imbalance of buyers and sellers swings to extremes. Buyers vanish as trust in the institutions of real estate finance and property rights has collapsed, and millions of distressed/defaulted mortgages don't get paid. Underwater sellers have a stark choice: either dump the house for cash (assuming the bank allows a short-sale and eats a massive loss) or stop paying the mortgage and see what happens. 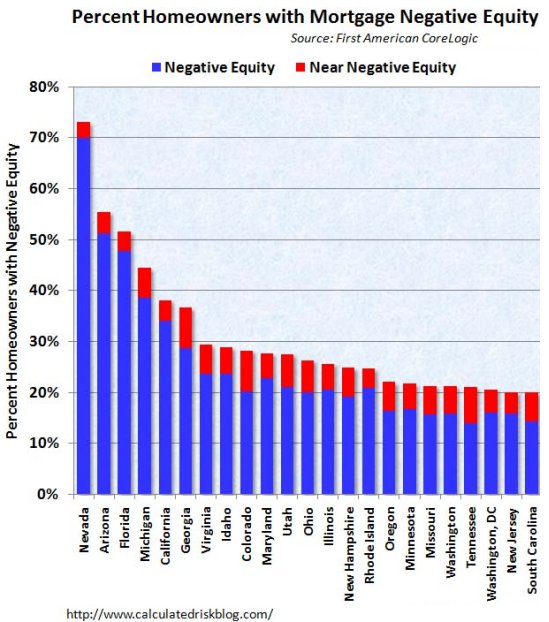 That sets up a new positive feedback loop in a very tenuous market: millions of underwater homeowners will realize their homes are plummeting in value and "recovery" is hopeless. Millions more who were on the edge will be pushed underwater as prices fall. The incentives for the newly underwater are clear: stop paying the mortgage, since price "recovery" is hopeless and the foreclosure process is frozen.

The imbalance between few buyers and millions of properties on the market or in the shadow inventory has only one "capitalist" resolution: the destruction of price down to levels that clears the inventory.

Las Vegas offers a example of this clearing: condos are selling for 15% or 20% of their bubble-era valuations--and this is with massive Federal subsidies of the mortgage market.

10. There is a fundamental legal battle playing out between the property rights and rules of law embodied in state laws, and the Central State/Federal laws which enable MERS to transfer ownership of mortgages as securities. You can't have both systems at the same time; either transfers of mortgages and ownership and the procedure of taking real property (foreclosures) meet state laws or these laws have been rendered moot.

Either there is due process of law or you have a kleptocracy/"banana republic" oligarchy. At present, that is the decision we face as a nation. If the banking Elites and their partners in the Central State (Fed and Treasury) are allowed to "win" and gut the property laws of the states, then the U.S.A. will be revealed as a kleptocracy/"banana republic" oligarchy.

If state laws are upheld, then the "too big to fail" banks are insolvent and they will fail. Then the question of kleptocracy arises once again: will the banks be allowed to fail as per Classic Capitalism, that is, their owners and managers will have to absorb the losses of that bankruptcy/failure, or will the Central State use its powers to collect taxes and cover the private losses of the Bank/Financial Power Elites? Privatizing profits and socializing losses has been the entire game plan since the global house of cards collapsed in 2008.

It's decision time, citizens. Either the banks/Central State "win" and we are a kleptocracy/ "banana republic," or they lose and the U.S. mortgage/ banking sector implodes and is either formally socialized (i.e. owned lock, stock and barrel by the Central State) or rebuilt from scratch without big banks, Federal guarantees and the Fed's incestuous interventions. ("We create the credit that enables the mortgage, you issue the mortgage, and then we buy the mortgage.")

There is no "fix" or half-measure that can patch this over now.

The non-mainstream media can speak the truth directly. For example, here is the excellent Acting Man blog:

The biggest question of all, is there anyone working on a solution? I know the answer to that: No.

We now have socialized housing. If you disagree, just imagine the consequences if government intervention were withdrawn. Real estate markets would collapse immediately. The government is the market. There is no exit strategy.

The feedback loops are in full runaway mode, and the end-state will be a collapse of one system or the other: either the incestuous banking cartel/Fed/Treasury system of "private profits, socialized losses" implodes, or property rights and the real estate market implode.

Right now, both are imploding, and each system's implosion reinforces the other's collapse.