As the Star Wars guys always said just before the bottom dropped out: "I've got a bad feeling about this..."

Take one part schizophrenia and another part propaganda, mix well, and you get a nasty little cocktail called "October 2010." For a bit of absurdist, schizophrenia-tinted humor, consider these two stories in the Wall Street Journal of October 7, 2010:

Uh, right. Which one is it, because you can't have both a middle class slamming on the brakes of discretionary spending AND have a Holiday season of blow-out retail sales.

The propaganda about the "recovery" has gone beyond the merely unbelievable and the surreal all the way to psychosis.

Frequent contributor U. Doran forwarded this analysis of Fed Chairman Ben Bernanke's recent speech in which he outlined the fiscal train wreck just ahead--never mentioning his own part in loosening all those rails so the train will have no choice but to derail.

Is this merely surreal, or is it yet more evidence that the Chairman's propaganda is veering into a state of disassociation akin to late-stage mental disorders?

The truly pernicious aspect of this crazy-making propaganda-schizophrenia cocktail is that it is masked by the econo-speak of Bernanke and the other shills. If Bernanke mentioned that the delightfully helpful inhabitants of Planet X were coming to save the economy with a spaceship full of quatloos, then we would understand the tragedy of his situation and the unfortunate schizophrenia which arises when basically decent people must do the bidding of an Evil System and its global Empire.

As correspondent David D. (M.D.) recently noted in an email to me, "this is now the norm: decent people in a most indecent system."

The whole "recovery" facade is falling apart, and the market knows it. Take a look at this chart of the Dow Jones Industrial Average, and imagine large ravenous rats fleeing a sinking ship while media shills are cajoling retail investors to jump on board while the tickets are still cheap: 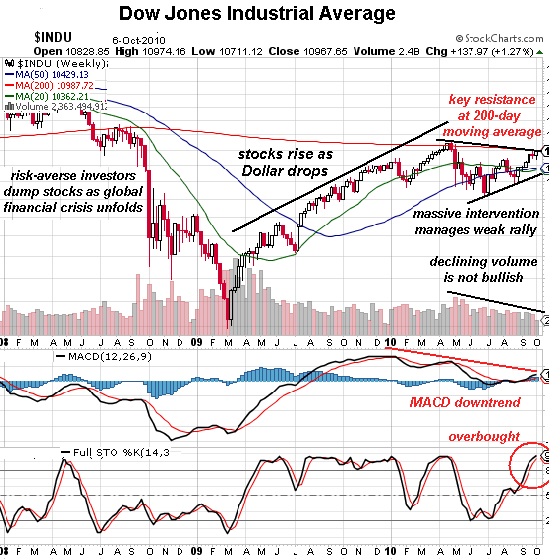 Look at the anemic volume. Who's buying to hold longer than a few minutes or perhaps days? Nobody. Insiders are selling at an unprecendented ratio of a gazillion-to-one (slight imprecision in the data) of shares sold versus shares bought.

The scurrying of little desperate feet is becoming louder. The powers that be had to pummel the U.S. dollar mercilessly for the past two weeks to keep the equity rally going, and now they're encountering push-back on multiple fronts.

Every propaganda and manipulative tool has been pushed to the limit. All the levers have been pulled and the wheels are all hard over; the engines are straining and the crew knows we're not going to miss the iceberg, but there is still a reservoir of magical thinking, a terribly misplaced hope that "it won't be too bad."

By pushing every button, yanking every lever and maxing out every propaganda ploy, the Power Elites managed to pump the DJIA up to the resistance offered by the 200-day moving average around 10,900. They'd hoped to blast through this barrier, just to show the doubters that the "recovery" was indeed "real," but unfortunately their glass slippers are turning to dust and their grand bejeweled carriage is taking on the unmistakable shape of a large pumpkin.

I've got a bad feeling about this market. I was pointing out the technical reasons to be long all summer, but those have vanished. Now there is the stink of fear in the air, the whiff of desperate men (and a very few women) trying futilely to maintain the illusion that "everything's normal now" and most absurdly, "this recovery is tracking previous recoveries." Yeah, if you turn the charts upside down so "down" becomes "up."

After revving the engines to the redline and devoting every shred of energy to ceaseless propaganda, all they managed was this sordid little rally back to key resistance. Claiming the "recovery" is "not bad" is like saying the rip below the Titanic's waterline is only 300 feet long--it could have been worse. True, but the end result is pretty much the same: this ship is going down and the rats sense it.

MACD has been declining since January, and the stochastic is overbought and looking ready to roll over. All the pumping, all the unprecedented QE and stimulus, all the goosing of profits and propaganda about forward Price-Earnings ratios proving that stocks are "cheap" (ignore the frantic rats and the list to starboard) have had this meager result: a wheezing little rally on declining volume.

I just have a feeling that something is going to trigger a decline so sharp and "unexpected" that the mainstream media shills will be gulping for "answers" when the reality has been staring them in the face all year: the recovery is nothing but manipulation and those who believed it were simply delusional.

Maybe they will manage a few more manipulated rallies (pump it up before the market opens and then lock it down, the old "ramp and camp" which has proven so resilient), but this is like the passengers being herded back inside to listen to the band while the ship lists deeper into the water. You can only jam a market with no volume for so long, and then the whole thing comes apart. We are close to that moment.

It is sad, really, how the propaganda-schizophrenia cocktail was designed to lure the retail investor back to equities; but that Mickey Finn failed to daze the wary "little guy," who has continued pulling billions of dollars out of equity funds and pouring hundreds of billions into Treasuries and other bonds.

The cliche is that the little guy is "always wrong" and thus equities are set to explode higher without them, but that line is wearing thin after months of listening to the cheerleaders hype the market while the ship sank lower in the water.

Keep your eye on the rats (insiders); they know what the bridge crew doesn't want you to know.

Disclosure: I am short the market via the QID. This is not advice, just a disclosure; please read the entire HUGE GIANT BIG FAT DISCLAIMER below.


Life has put on a full-court press, and while I read every email I am unable to respond to all correspondence. Hopefully Life reverts to a half-court press soon. (Please excuse the basketball analogy.)