Japan's economy has stagnated for two decades despite the global economy experiencing one of its greatest economic booms ever. To get a sense of the stagnation, let's look at some charts, courtesy of frequent contributor B.C.

It's difficult to maintain widespread prosperity if the percentage of the populace powering the economy declines. Here is a chart of the employment-population ratio in Japan and the U.S.

B.C.'s comment: The US is 12 years behind the Japanese peak Baby Boomer curve (1947-49 and 1956-61). Beginning next year, the peak demographic drag effects begin in earnest for those peak Boomers turning age 62-65 en masse. With US fertility rate falling below replacement at 1.9, we will not experience a reacceleration of the employment-population ratio. 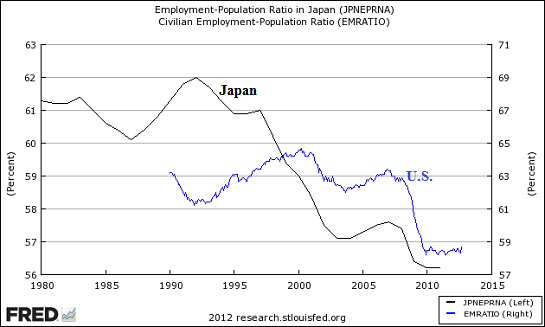 Despite 23 years of unprecedented stimulus and deficit spending, Japan's consumer price index (CPI) is at 1994 levels. Japan's stock market and real estate bubbles peaked between 1989 and 1991. CPI rose smartly in the post-bubble decline and then leveled off, rising during the tech/dot-com bubble of the late 1990s and the global commodity bubble of 2008. But despite these temporary (and modest) spikes, adjusted CPI is back to 1994 levels. So much for inflating away one's debts. 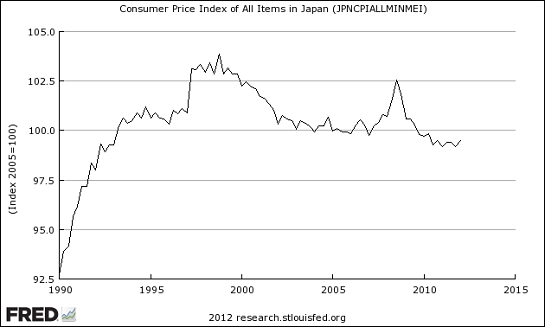 Japan's gross domestic product (GDP) has oscillated around the zero line for 20 years. Japan was in effect bailed out by China's massive stimulus spending after the 2008 global financial meltdown, but now that China's growth and stimulus are both slowing, saviors of Japan's export-dependent GDP are nowhere in sight. 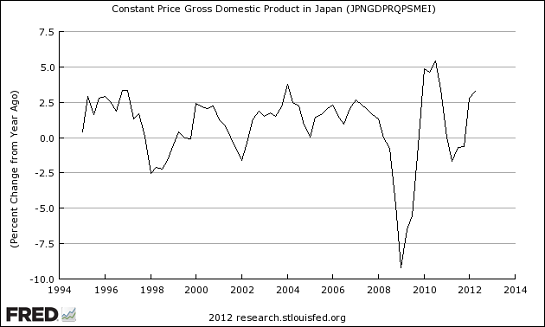 Japan has relied on government deficit spending to prop up its economy and GDP. Deficit spending means borrowing money via the bond market and squandering it on sclerotic fiefdoms, entrenched cartels and bridges to nowhere (the construction industry cartel). 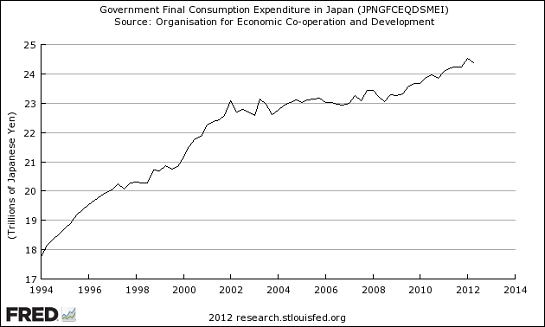 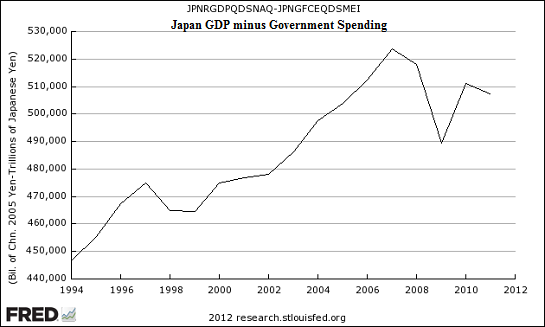 Yesterday we covered Japan's "fiscal cliff," as tax revenues don't even cover interest on the national debt and Social Security. ( The Future of America Is Japan: Runaway Deficits, Runaway Debts)

Japan continues to avoid fiscal or financial crisis, and perhaps it can do so for decades to come. But we should note that Japan has had the incredible, once-in-a-lifetime tailwind of a global boom for the past 23 years. That has enabled Japan, and all the other developed economies, the means to avoid facing their structural and demographic problems.

If Japan's economy has stagnated during a global boom, what will it do during a global bust? How will it fare as demographic forces reduce its workforce while increasing the number of retirees depending on government spending? Can a nation borrow its way to prosperity while its tax base erodes and its Central State expenses skyrocket?

Japan's stable stagnation will continue in a linear fashion--until it doesn't.


NEW VIDEO! On the Edge: Max Keiser, Stacy Herbert and me

Viewer quote: "CLASSIC  Max Keisers On the Edge with Charles Hugh Smith already, if you ask me." Thank you, Max and Stacy, for yet another opportunity to discuss key issues with you.